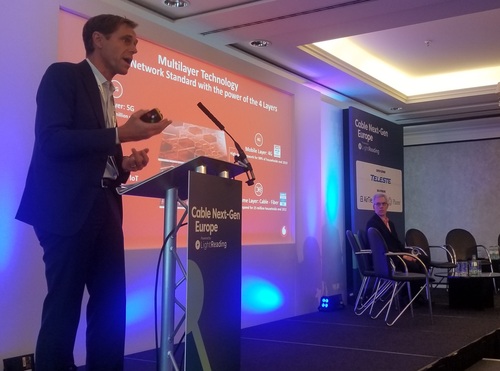 “That’s amazing,” Mack said of that take rate, noting that Vodaphone Germany has been pleasantly surprised by how the 1-Gig tier has performances among new broadband customers. And once customers get on 1-Gig they rarely opt for a lower speed tier later on, he said.

That rate also helps to illustrate why Vodafone Germany is plowing ahead aggressively with its DOCSIS 3.1 network upgrade. The operator has about 11 million homes in Germany enabled for 1-Gig along with a plan to expand that to about 25 million households by 2022. At this stage, Vodafone Germany is selling its 1-Gig service for 150 per month ($165.08).

Cable key to Vodafone Germany’s network convergence
Vodafone Germany’s D3.1 rollout and cable assets in general are playing an important role in the company’s grander fixed mobile network strategy and its plans for a friendly convergence between DOCSIS and mobile, he said.

“The world is converging nowadays,” Mack said during his keynote at a Light Reading-hosted part of this week’s Cable Congress event here. “Mobile-only players will have hard times going forward. That’s why Vodafone [decided] to become a mixed [network] player,” he added, noting that the company’s “multilayer” technology strategy is comprise of the mobile layer, home layer and a machine layer (for Internet of Things services).

Industrial apps are also expected to help fuel the business case for Vodafone Germany’s 5G network rollout that increasingly will be backhauled by the company’s wired infrastructure.

“This is the priority,” Mack said of the marriage between 5G and industrial IoT, as 5G likely will be more difficult to monetize on the consumer services end. Industrial IoT “is not as sexy, but it’s a real game-changer. This is not high-tech on transmission, but high-tech in terms of the applications and services you can do,” he said.

Mack is also dreaming of plugging this convergence concept into cable gateways that can also support 4G and 5G connectivity and, therefore, take full advantage of Vodafone Germany’s multilayer access networks. While there’s a business case for that kind of device for higher-spending, commercial-class customers, prices on such a multi-network gateway will need to come down a bit to fit a consumer services model. “It’s about money, [but] we’re working on it,” Mack said. “The business case is [currently] prohibitive.”