Adtran Connect Event Alaska Communications faces the unique challenge of bringing broadband and reliable Internet connectivity both to the Alaskan bush and urban areas on a typical day. But now the operator is also contending with new connectivity challenges brought on by the COVID-19 pandemic.

In a keynote here today, Rick Benken, VP of network strategy, engineering and operations for Alaska Communications, explained that providing a network to as many Alaskans as possible requires deploying a variety of connectivity services, including copper, fiber, satellite and even Facebook Terragraph a gigabit wireless technology by Facebook Connectivity.

“We still use quite a bit of copper in our network, and we have a lot of fiber builds going on, especially in Anchorage,” says Benken. “We’re also working with small cell providers and getting fiber out to businesses, but we still use a lot of copper and mainly deploy TA5000’s.” TA5000 is Adtran’s multi-service access node (MSAN), which delivers gigabit services over fiber, high-speed Internet over copper, mobile backhaul and Carrier Ethernet services. 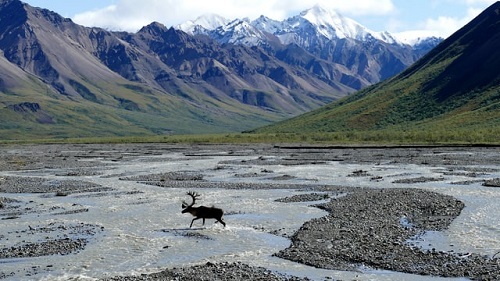 Alaska is wide and wonderful but that doesn’t make delivering broadband to a dispersed population an easy task.
(Source: Joris Beugels on Unsplash)

While Alaska is twice the size of Texas geographically, its total population is only 700,000 that’s less than one-fifth the population of Los Angeles. Alaska Comm delivers connectivity to areas like Anchorage with around 300,000 people, and to villages that have as few as 50 people. In addition to serving a population that’s very spread out, Alaska Comm has to deploy networks over rugged terrain and in temperatures that can dip to 40 degrees below zero Fahrenheit.

The pandemic plus extreme weather conditions made it difficult to send technicians to remote areas in Alaska this past winter, said Benken. In turn, that made it challenging for Alaska Comm to troubleshoot connectivity issues for subscribers on-site, and delayed some of the company’s new satellite service projects, which the operator planned to use to support growing demand for telemedicine and to provide connectivity to rural hospitals.

Alaska Comm partners with OneWeb, and is looking into collaborating with SpaceX, to provide satellite connectivity to remote villages a.k.a. the “bush” on TV but Benken said that this option can be cost-prohibitive in some cases. Where satellite connectivity is too expensive, Benken said the operator relies on point-to-point (PTP) and point-to-multipoint (PTMP) fixed wireless to deliver broadband speeds of 1MB up and 10MB down. In addition, if copper lines are already deployed and in “good shape,” Alaska Comm provides DSL services.

“PTP is also used widely for our CAF II [Connect America Fund Phase II] deployments,” said Benken. “We’re deploying 32,000 Connect America locations our program is a little different than in the lower 48 states. Our version of broadband here is a minimum of 10MB down and 1MB up, so a little looser than down south. Folks are pretty thrilled with any amount of bandwidth.”

With many villages difficult to access by road and even by plane, Alaska Comm aims to reduce the number of truck rolls by educating customers on how to troubleshoot connectivity issues. Alaska also has a more transient population some areas are only populated in the summer and many military personnel are in and out of the state.

To address this mobile population’s fluctuating need for Internet connectivity, Alaska Comm offers the Internet Now Service PTP fixed wireless that can be prepaid and is “instant on,” meaning subscribers who travel frequently can choose when to activate and deactivate their service without a visit from a technician.

“We’re doing this partially for speed of deployment and partially it’s the nature of the beast here in Alaska. There are very few aerial facilities, so most everything is buried,” said Benken. He added that due to construction challenges, there aren’t significant amounts of FTTH deployments in Alaska. Alaska Comm plans to launch the Terragraph service later this year.