Amid 5G kerfuffle, China still has a tight grip on broadband | Light Reading

Switch off today’s 5G networks and most of us would barely notice. Despite telco enthusiasm, and some government panic about letting Chinese vendors anywhere near such a critically important technology, 5G remains a pointlessly fast luxury for the cashed-up. In a pandemic that has confined millions to their homes, it is even less useful telecom’s equivalent of a supercar in a gridlocked neighborhood.

Turning off the broadband connections into people’s homes would be another matter entirely. Without that connectivity, entire populations would not be able to work, educate their children, see family and friends, watch the latest movies even shop for household goods. It is no exaggeration to describe broadband as the life-support system for a chronically ill society.

And yet fixed broadband often seems an afterthought. While governments promise connectivity for citizens in remote and rural areas, conscripting operators into their fiber-for-all campaigns, the supply side has received none of the attention that has gone toward 5G. Authorities either have not realized or do not care that today’s broadband technology market is just as lopsided as the 5G one. Three big companies hoover up three quarters of all the money that operators spend on broadband access products. And two of them are Chinese.

Market shares of broadband access products by revenues in Q3 2020 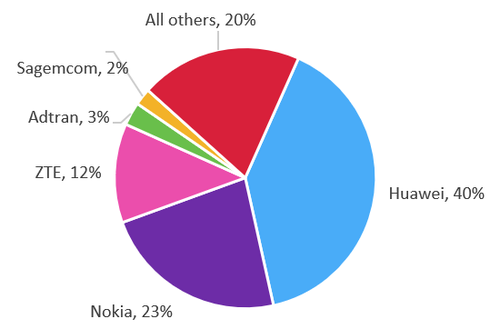 Research carried out by Omdia, a sister company to Light Reading, shows that Huawei, Nokia and ZTE controlled 75% of the worldwide market for broadband access products in the third quarter of 2020, the most recent for which data is available. The next biggest player, with a 5% share, was Fiberhome, another Chinese vendor, and the rest of the market was split between even smaller firms. Restrictions on Chinese vendors in 5G have triggered alarm about overreliance on Ericsson and Nokia, the only big alternatives. But the same restrictions in broadband would leave operators with no sizeable option bar Nokia.

Having imposed tough limits on Chinese vendors, the UK government is one of the only ones to have publicly voiced concern about broadband access. Starting in 2023, Chinese vendors will be restricted to 35% of any full-fiber network, the same cap that applies in the 5G radio access network. But while operators will have to rid their 5G networks of any Chinese products by 2028, the government is in a quandary about fixed.

In a blog he wrote last July, Ian Levy, the technical director of the UK’s National Cyber Security Council, summed up the risks of excluding Huawei from broadband. Promising a government consultation with operators, Levy observed that “there is only one other scale vendor in this sector” a clear reference to Nokia. “As we’ve said before, overreliance on any vendor is bad from a security and resiliency point of view.”

BT-owned Openreach, which operates the UK’s only nationwide wholesale network, has relied heavily on Huawei as a broadband vendor. Concerned that new rules would leave it at the mercy of Nokia, its second supplier, Openreach brought in Adtran as a third vendor last year. With just 3% of the international market, according to Omdia’s data, the US company is dwarfed by broadband’s big three. But it already runs an impressively large business in Germany, where it claims to supply the technology for about 35% of all Internet connections. A convincing performance by Adtran in the UK might persuade authorities to move decisively against Huawei. 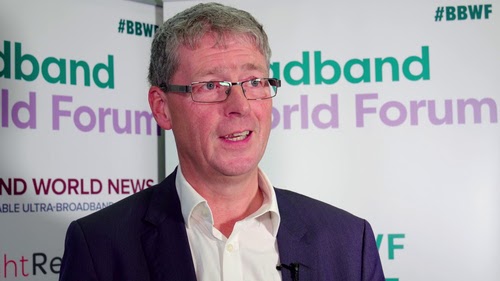 Yet BT evidently hopes to avoid any further disruption to its network plans. Quizzed by the parliamentary Science and Technology Committee last month, Howard Watson, BT’s chief technology officer, downplayed security concerns about retaining Huawei. “We do believe that fixed, whether full fiber or fiber-to-the-cabinet, has a lower risk profile than mobile and please remember that it is only in the access part of the network,” he said. “In the core of the fixed network, we have no presence from high-risk vendors.”

That very same argument was made about mobile, however, and it did not stop the ban on Huawei in the 5G radio access network. And just as that decision seemed to embolden some other European regulators, a UK clampdown on Huawei in fixed could prompt scrutiny of Chinese involvement in Europe’s broadband infrastructure.

Together, Huawei and ZTE collected 52% of the broadband access revenues generated internationally in the third quarter of 2020, according to Omdia. And Huawei looks even more powerful in this market than it does in mobile, with a 40% share of business. In the last decade, it has signed deals with some of Europe’s biggest players, including Telecom Italia and Spain’s Telefnica. France’s Orange counts Huawei and Nokia as its main broadband access vendors.

As the operators of fiber networks start to invest in next-generation PON (passive optical network) technology, geopolitics could represent a growth opportunity for smaller vendors such as Adtran and Calix, another US firm. Slovenia’s Iskratel might also benefit in parts of Europe, says Julie Kunstler, a senior principal analyst for Omdia. “Part of it is because of the PON market doing very well and part of it is because of the operators that have said going forward we are not going to use Huawei, or not use it as much,” she tells Light Reading.

Jeff Heynen, vice president at the Dell’Oro market-research group, broadly agrees. “I think you will continue to see more countries and operators in Europe begin to reduce their reliance on Huawei for fixed broadband infrastructure, though unlike with 5G and mobile core it will more likely come via a gradual replacement,” he says.

Right now, neither of those experts anticipates any of the uproar that has happened in 5G. Heynen thinks operators in several big countries, including Greece, Italy, Spain and Turkey, will continue to buy equipment from Huawei and ZTE. But if the UK does introduce more stringent curbs, and others do likewise, it would heighten the risk of industry fragmentation. “If Huawei doesn’t see any advantage in participating in certain standards groups, it is strong enough to do its own standard,” says Kunstler. “Ultimately, that could cause problems for the operator and the consumer.”

Battle of the PONs

There are already signs of this bifurcation over future broadband standards. Nokia has thrown its weight behind a technology called 25G PON, while Huawei wants to skip this and proceed directly to what is known as 50G PON. The disagreement came to a head at a meeting of the International Telecommunications Union last year, when Huawei and Chinese service providers essentially blocked 25G PON’s standardization.

As a consequence, Nokia has taken 25G PON outside the normal standardization process, conscious that operators including Japan’s Rakuten Mobile and New Zealand’s Chorus have an appetite for the technology. Besides sponsoring a multi-supplier agreement, signed by service providers as well as other vendors, Nokia is working on its own chip technology, under its Quillion brand, so it is not beholden to the development schedules of firms like Broadcom, a US components maker.

The move is perhaps not as brazen as it might sound. Similar high-capacity technologies have already been used in data centers, for one thing. With sufficient demand from major service providers, there could be widespread adoption of 25G PON systems regardless of what standards bodies do. And while it normally comes first, standardization might eventually succeed deployment if a big part of the industry embraces the technology.

Not everyone outside China is convinced that will happen. Ronan Kelly, Adtran’s chief technology officer for the EMEA and APAC regions, reckons a mixture of today’s GPON technologies and XGS-PON, a 10G system, will “comfortably” meet telco needs over the next decade. “Ten years is a long time to be able to drive cost out of the next PON technology,” he says. “If the market that consumes the bulk of the PON transceivers has already decided it’s doing 50G PON, I expect by the time it is needed it will prove to be the most cost-effective option.” 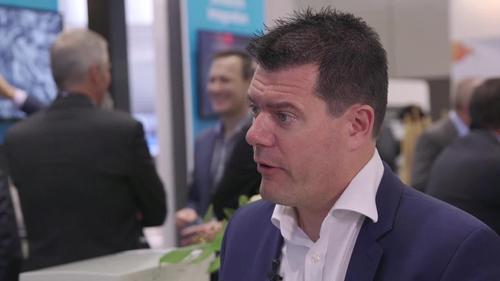 Adtran’s long-term focus is on 50G PON, says Kelly. “Either way, for Adtran, thanks to our architecture, if the world does decide it wants 25G PON, and the ITU revisits its decision and chooses to standardize it, we can implement it with ease.”

Nevertheless, the entire saga increases the possibility “that the world will split into two purchasing groups: Chinese and Western,” according to 650 Group, a market-research company, which described last year’s developments in an October blog. “What’s happening now is not uncharted waters, but it is rare for the telecommunications industry to splinter into multiple buying groups usually standards are developed and followed for the benefit of the industry,” it says.

US sanctions introduced by former US President Donald Trump are also wrenching apart the supply chains that have underpinned global telecom standards. But as they look for alternatives to US mobile technologies, both Huawei and ZTE already design their own PON chips, meaning they are not reliant on US semiconductor firms like Broadcom and Intel for componentry. As of last year, most PON components could be sourced outside of the US, according to a reliable source who requested anonymity.

Bifurcation would force authorities and operators in Western economies to look even more seriously at the non-Chinese alternatives to Nokia. In some respects, there is less to worry about here than in the mobile market, where the interconnectedness of 4G and 5G has forced some operators to replace Huawei in both. Similarly, the momentum behind open RAN is fuelled by some frustration that all parts of a traditional radio access network must come from the same vendor’s system to avoid a collision between incompatible products.

By contrast, interoperability in broadband, allowing central office equipment from one vendor to speak with customer premises equipment from another, is quite far advanced, thanks largely to the efforts of the Broadband Forum, an industry association, according to Kunstler.

That does not mean operators have no worries about broadband geopolitics. While less money is spent on fiber products than radio access networks, removing the Chinese would be disruptive. Excluding Huawei and ZTE in the future would leave Western economies with a Finnish giant and an assortment of smaller vendors whose lack of scale clearly unnerves the UK government.

“I think scale and experience are two reasons why some operators are not turning their backs on Huawei and ZTE,” says Kunstler. For many of those operators, keeping shtum about their reliance on Chinese vendors may seem like the best policy.