The most exciting thing about 5G is not what it will do for smartphone zombies (smombies) but its ability to connect billions of non-consumer gadgets. This, at least, is the message the industry used to preach. Unfortunately, the sputtering “Internet of Things” has forced it to backtrack and reverse straight into Apple, a company with engine problems of its own. 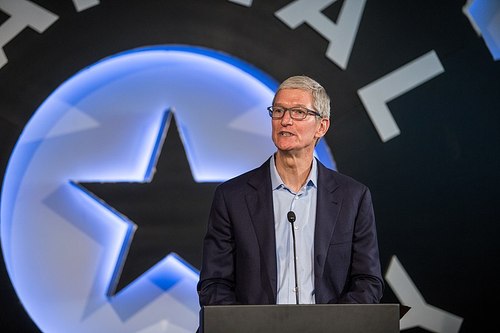 Apple CEO Tim Cook is no Steve Jobs but his business is worth an astronomical $2 trillion.

Under the late Steve Jobs, Apple built a well-deserved reputation for gadget-making brilliance. Its computers were a masterclass in elegance and user-friendly design. Its iPod revolutionized digital music. Its original iPhones brought touch screens and an app store into the mass market. Jobs never stooped to making network technologies the main protagonists in his drama. He didn’t have to.

Tim Cook, his successor, runs a $2-trillion-dollar corporation increasingly devoid of ideas. It showed with yesterday’s announcement about the iPhone 12. “Every decade, there’s a new generation of technology that provides a step change in what we can do with our iPhones,” he said. “The next generation is here.”

A step change it is most certainly not, though. Jobs used 3G and Wi-Fi as the bridges to an island of technological treats, both virtual and real. Cook’s 5G bridge super structure though it may be leads nowhere new. It is not as if anyone expected a self-driving car or an Apple demo of remote-control surgery, but the Apple from 2007 would have had a 5G app store or service to lead its update. And it would have scratched any reference to 5G.

Any right-minded consumer is in for a disappointment. Costing at least $829 $130 more than the lowest-price iPhone 11 the iPhone 12 is a bit thinner, a bit larger and a bit faster than its predecessor. What else does Apple have to say? Well, it promises a “brighter, more immersive viewing experience” and an “advanced dual-camera system.” It’s more “durable,” too. Awesome.

5G might be needed in the future to support virtual-reality dodgeball, 8K TV or some other small-screen service that titillates the smombie. But Apple is either ceding the job of service innovator to someone else or simply coming up short. There is no application breakthrough that justifies ownership of a 5G smartphone today.

“We may see some short-term disappointment from consumers,” said Daniel Valle of World Wide Technology, a technology service provider. “In essence, today’s announcement is asking customers to future-proof their purchase; to invest now and wait for the lightning speeds promised by 5G.”

The lack of a breakthrough would have mattered to Apple before its entry into the smartphone market, when analysts doubted the impact it could make. In 2020, after Apple’s metamorphosis into an iPhone factory, it is practically irrelevant. Amid the economic blight of the June-ending quarter, before a 5G model had arrived, Apple still managed to ship $26.4 billion worth of iPhones, nearly 2% more than a year earlier. Cynical or otherwise, Apple knows it could drop a retrograde, feature-poor gadget into the bullpen of its followers and watch a feeding frenzy ensue.

Many fanboys are said to be gagging for an upgrade. The smartphone sector experienced a mini downturn recently as consumers declined to buy new gadgets that offered only tiny improvements. Total mobile phone shipments are expected by CCS Insight, a market-research firm, to fall 15% this year, to about 1.54 billion units. Some Apple consumers apparently skipped the iPhone 11, aware that a similar-looking 5G iPhone was in the works.

The availability of a 5G iPhone could provide the stimulus the network technology needs, according to CCS Insight. Just 250 million phones shipped this year will be 5G-compatible, it says, but this number will more than triple in 2021. Vodafone UK and EE have already raced out press releases about the forthcoming availability of the iPhone 12.

5G service plans are already so cheap in saturated European markets that nobody expects a sales boost for operators. The short-term consolation is that 5G take-up will shift network traffic to a less congested and more efficient highway.

Longer term, the industry still prays that 5G will be more than just an extra, high-speed lane for people who enjoy noisily overtaking their neighbors. “The launch of the iPhone 12 is likely to be a catalyst for the acceleration of new apps, new demands, which in turn drive network improvements over the next years,” said Avishai Sharlin of Amdocs, an Israeli software developer.

Apple used to be that sort of catalyst. The next couple of years may show it has relinquished that role for good.