04 May As Nokia bolsters 5G spend, other R&D is suffering | Light Reading

A 5G radio plan “excluding China” sounds about as sensible as a sportswear business that excludes athletes. The country dominates the global market for existing 4G infrastructure and is expected to erect about half a million 5G basestations this year alone.

But that phrase littered Nokia’s first-quarter earnings report after the Finnish vendor was spurned by China’s operators in recent 5G tenders. On the upside, it can focus on other 5G markets with less exacting requirements. “Excluding China,” Nokia claims, it has already won 5G deals where it did not previously supply 4G products a tricky feat for any vendor. Its 5G R&D investments have grown, it says.

Overall R&D spending has not, however. Indeed, that figure has been falling since 2017, and the decline on the networks side continued in the first quarter of 2020. Last year, Nokia spent about 500 million ($545 million) less on R&D than it did in either 2016 or 2017. That means its annual investments have dropped a tenth over this period. 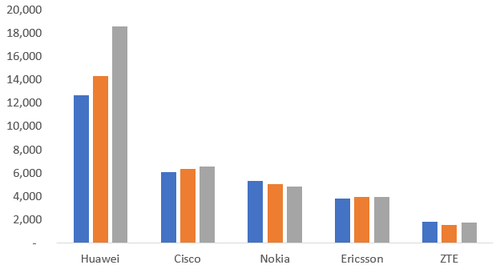 Along with most other equipment vendors, Nokia does not break out details of spending on particular technologies. But investments outside the 5G business have evidently been squeezed from two directions the increase in 5G spending, and the overall budget cuts.

This squeeze has received little attention from an industry currently fixated on 5G. Before the COVID-19 pandemic, equipment vendors had been counting on this hyped technology for a sales boost in 2020. The mobile radio market also attracts attention because it is so much bigger than other equipment sectors. Last year, mobile access products accounted for about 64% of all network sales at Nokia, and for about half of total company revenues. Lose its way in 5G, and the consequences could be devastating.

The risk is that spending cuts upset Nokia’s competitiveness in other areas. Those include several of the product divisions it acquired with its takeover of Alcatel-Lucent in 2016, such as fixed access, IP routing and optical networks. IP routing had an especially weak first quarter, with sales down 11% year-on-year, although Nokia blamed this unfavourable comparison on its unusually strong performance in early 2019. Supply chain constraints linked to COVID-19 were largely responsible for the 2% drop in optical equipment sales, it said.

Certainly, there is no evidence that Nokia is slashing R&D investments in IP routing or optical, where its reputation is solid. Obvious targets for cutbacks would include older mobile and fixed-line technologies, such as 3G and DSL. Yet this still implies an overall decline in some broad categories.

Of the different product groups, Nokia has an abundance. No other company apart from China’s Huawei ticks as many boxes in the catalogue of telecom and enterprise network goodies. But Huawei’s R&D investments dwarf Nokia’s. Last year, the Chinese company spent about $18.6 billion on R&D, using today’s exchange rate. Nokia managed just $4.8 billion. Even accounting for Huawei’s massive devices business and other interests, the Finnish vendor looks thinly spread by comparison.

In its defense, Nokia has probably realized some efficiencies through its takeover of Alcatel-Lucent. In 2015, the year before the deal happened, combined R&D spending at Nokia and Alcatel-Lucent came to about 4.5 billion ($4.9 billion), just 100 million ($109 million) more than Nokia’s budget last year. More recently, it attributes R&D savings at its fast-growing software business to investment in a common software platform, allowing it to phase out other systems.

But it remains the only one of the “big five” (Cisco, Ericsson, Huawei, Nokia and ZTE) whose R&D investments have markedly declined in the last couple of years, even though it spent a higher percentage of revenues than any of its rivals. Ericsson, its main non-Chinese competitor, also looks more focused. With a budget of roughly $3.9 billion last year, the Swedish firm invested about $900 million less in R&D than Nokia did. But Ericsson has sold off TV assets and concentrates almost entirely on mobile technology these days.

R&D spending as percentage of sales 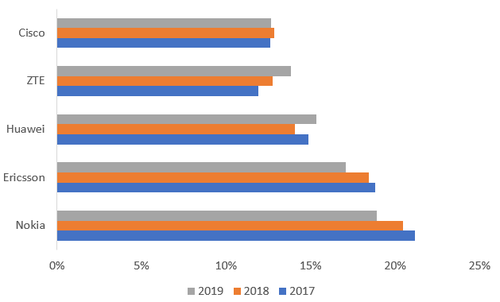 Nokia CEO Rajeev Suri has fiercely denied talk of R&D constraints. “We have a better mix of low-cost countries after looking at where talent is available,” he told Light Reading during an interview in June 2019. “It has helped to not have everything in Finland but use Poland, Greece and other parts of Europe.”

Even so, other suppliers would seem to have the same opportunity, and the Chinese vendors have a huge talent pool on which they can draw. “There are so many people in China to hire,” said Earl Lum, an analyst with EJL Wireless Research, during a recent conversation with Light Reading. “It doesn’t matter that everyone you are hiring isn’t an Einstein. One of them will be.” Last year, Huawei had 96,000 employees in R&D, up from 80,000 in 2018. ZTE’s R&D function included 28,300 employees, an increase of about 2,300 on the 2018 figure.

While Nokia does not break out employee numbers by division, its overall workforce shrank by about 5,000 employees in 2019 as the company made cost savings a priority. Its investments in 5G have already forced it to lower its target for annual cuts to 500 million ($545 million), from an original figure of 700 million ($763 million), between 2018 and 2020. Nokia insists its revised plan is on track, with overall costs down about 200 million last year, to roughly 22.8 billion ($24.9 billion). Yet profitability has been elusive.

All that puts Nokia in a difficult position. Boosting R&D investments could threaten profits, aggravating investors already upset that margin targets have repeatedly been lowered. But further cuts will expand the gap between Nokia and Huawei, which insists it will spend about $20 billion on R&D this year. No wonder Nokia’s strategy is the subject of so much speculation.