Last year’s jobs statistics have started to roll in, and they are predictably grim.

After AT&T slashed headcount by more than 13,000 in the first nine months of 2020, the final tally was always going to be ugly. Results published this week show another 3,870 jobs disappeared in the fourth quarter. More than 50,000 have gone in just five years about 18% of AT&T’s headcount at the end of 2015.

Verizon has pruned with similar zeal. Only 1,000 jobs were cut from the total in the final three months of 2020, and just 2,800 over the entire year. But 45,500 have vanished since 2015, an alarming 26% of that year’s count. The combined losses are roughly equal to the entire workforce at Vodafone, a UK-based operator with international operations.

Headcount at AT&T and Verizon 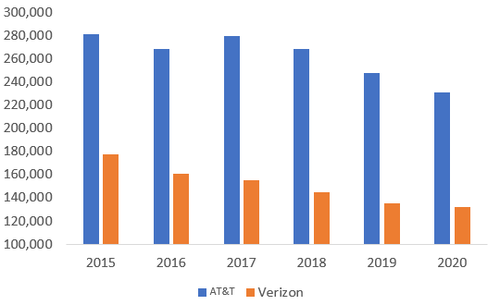 Source: Companies. Note: AT&T’s 2017 total includes employees at Time Warner, although the takeover was not actually completed until mid-2018.

The sale of data center assets and outsourcing of customer care explains much of the shrinkage that has occurred at the two companies in recent years. New technologies, meanwhile, are allowing telecom operators to maintain networks and run their operations with fewer staff than ever before. An obvious example is the chatbot, a messaging or voice-controlled application that can answer many customer queries as well as any human assistant. On the networks side, tireless software bots are replacing coffee drinkers in the network operations center (NOC). The zero-person NOC is even a reality.

More recently, the ongoing health crisis has brought cuts. Consumers used to shop for gadgets and service plans at the local mall. Increasingly, they are buying online, a trend that seems unlikely to reverse when the pandemic ends. Store closures prompted by COVID-19 have claimed thousands of telecom jobs in some countries.

For AT&T, job cuts form part of a program to save about $6 billion by 2023. After some dubious takeover activity, including an $85 billion splurge on the currently virus-stricken Time Warner, its long-term debt has soared to $153.8 billion, from just $75.8 billion in 2014, and its net debt is about 2.7 times EBITDA (earnings before interest, tax, depreciation and amortization). Sales are in decline and profits are being squeezed. None of that looks good to investors, which have sent AT&T’s share price down a fifth since this time last year.

John Stankey, AT&T’s newish CEO and the architect of its savings scheme, is under pressure to streamline quickly. Cost-cutting initiatives have so far saved AT&T about $2 billion, he told analysts this week. Stores have been closed and more than 30 product offerings have been retired. AT&T has also been selling off property.

Will it prove enough? While slashing costs, Stankey has had to write down the value of AT&T’s pay-TV business by a massive $15.5 billion after sales tumbled. He has also thrown an estimated $20 billion at thin air, buying radiofrequency licenses in a 5G auction that has raised more than $90 billion for the government. This year, AT&T expects to invest about $18 billion in capital expenditure, pumping money into fiber and 5G networks. Fall behind rivals and it might not recover.

In the meantime, Verizon is close to hitting a cost target of its own. Announced back in 2017, the plan was to save around $10 billion by the end of 2021 though consolidation of networks and platforms and the “virtualization” of technology. From a balance-sheet perspective, Verizon looks in better shape than AT&T, with long-term debts of $123.2 billion, up 19% since 2015, and a net-debt-to-EBITDA ratio of about 2.

Still, Verizon’s revenues fell about 3% last year and its operating profit dropped 5%. It signed up fewer mobile customers than AT&T in the final quarter of 2020 and is thought to have spent even more in the 5G auction than AT&T as much as $35 billion, according to some estimates. All of that explains why it is not stopping at $10 billion. “There’s significant opportunities to continue to make our business more efficient,” said Matt Ellis, Verizon’s chief financial officer, earlier this week. “The teams are very focused on those. And the $10 billion goal won’t change us won’t slow us down at all from continuing with that.”

The unknown is just how many more jobs AT&T and Verizon could sacrifice without hurting their performance. Together, they have already cut about a fifth of the workforce in the last five years, realizing major productivity gains. Revenues per employee at AT&T rose 40% between 2015 and 2019, to $731,207. At Verizon, they were up 32%, to $976,800. But AT&T witnessed a much smaller improvement this year, to $744,323, and Verizon saw a decline, to $970,439. While fewer job cuts would probably have made the 2020 figures look even worse, the operators cannot (yet) automate everything bar the C-suite.

The likely continuation of this trend will be awkward for Joe Biden, America’s new president. A prolonged pandemic or the slow rollout of vaccines may prompt telecom operators and other companies to automate faster. Jobs that disappear over this period will probably not return.

At the same time, Biden has stoked employment hopes by echoing Donald Trump’s “Made in America” promises. In the telecom sector, Ericsson, a major supplier to AT&T and Verizon, has previously said it can meet all North American demands from a robotized Dallas factory that employs just 100 people. Anyone convinced “Made in America” means jobs for Americans may be in for a shock.