Cloud gaming is perhaps the world’s most demanding online activity in terms of network performance. It requires a consistent, high-speed, real-time connection, and any failure in any one of those metrics could mean the difference between life and death (at least in a twitchy, first-person shooter like Fortnite or Call of Duty).

That’s why RootMetrics’ latest report is so interesting.

The network testing firm, a division of IHS Markit, recently played a bunch of online games in Los Angeles to see whether operators’ established 4G networks, or their brand new 5G networks, would be up to the cloud gaming task.

“AT&T’s median download speeds on both 4G LTE and 5G easily surpassed the bare minimum speed requirements set by the cloud gaming platforms. AT&T’s latency, meanwhile, was by far the lowest among all four carriers in LA on both 4G LTE and 5G and was very close to the minimums of the providers,” the firm wrote, arguing that AT&T provided the best set of network performance metrics for cloud gaming. “While AT&T’s latency was the lowest among the carriers, it was still slightly higher than the game providers’ 30ms minimum standard on both 4G LTE and 5G. That said, the good news is that in the context of mobile cloud gaming, latency below 50ms is generally low enough to allow for relatively smooth gameplay for both casual games in SD and most multiplayer online games in HD.”

The firm added that Verizon provided blazing fast download speeds and extremely low packet loss, but its latency measurements were among the highest which is not good for cloud gamers hoping to win points.

The firm also tested Sprint’s 5G network in Los Angeles constructed before the operator’s merger with T-Mobile closed and found that Sprint provided suitable cloud gaming download speeds but that its latency and packet loss figures “could prove difficult for some multiplayer online games.”

A new digital battleground
The network and business implications that the growing online gaming sector has for Internet service providers, and 5G operators, are significant. IHS Markit said it expects the cloud gaming content and services markets to grow from $387 million in 2018 to $2.5 billion in 2023, with 5G driving much of that growth.

Most smatphone users are familiar with “casual games” like Tetris or Candy Crush, a new spate of providers are working to bring high-end, hardcore multiplayer video games into the online world. Services like Google Stadia, Microsoft Project xCloud and Steam Remote Play basically take complex console video games think first-person shooters like Overwatch or baseball simulators like MLB The Show 20 and stream them over the Internet. That’s noteworthy considering such games previously required players to purchase a high-end computer like a desktop or Xbox to run the games locally. Now, with streaming, the games can run inside a data center and stream to a player on a laptop, tablet or phone anything with a good Internet connection.

The only catch is that the player’s connection needs to be fast as well as reliable and almost instantaneous. According to RootMetrics, casual games require 7Mbit/s to 10Mbit/s connections, while complex online games require 20Mbit/s to 35Mbit/s. But that’s just the start of it.

Online game streaming also requires low latency, which is the time it takes for a player’s request to be answered by the cloud server running the game. RootMetrics said latency of 10ms to 30ms is required for online gaming. Ultra-low latency isn’t a deal-breaker for other online streaming services, like Netflix or Spotify.

RootMetrics also tested two other critical network metrics for online gamers: Jitter (similar to latency) and packet loss (where bits of data are lost in transit). “High jitter can lead to choppy or laggy gameplay and/or distorted audio and chat functionality, while low jitter can keep games running smoothly (as long as latency is also low),” RootMetrics explained. “Packets can also arrive out of order, which could theoretically lead to a game that’s unintelligible.”

How they stacked up
In its detailed report on the topic, RootMetrics outlined exactly how AT&T, Verizon, T-Mobile and Sprint performed in Los Angeles in terms of speed, latency, jitter and packet loss, across their 4G and 5G networks. LA is one of the few cities that hosts a 4G and 5G network from all the top providers.

In general, the operators’ 5G networks performed better than their 4G networks but that doesn’t mean LA-area gamers should immediately upgrade. For example, the firm noted Verizon’s 5G was only available in 0.3% of locations, while T-Mobile’s 5G was available in 32% of locations. That discrepancy is because T-Mobile’s 5G network works in 600MHz spectrum (which can cover wide geographic areas but can’t support very fast speeds) while Verizon’s network works in millimeter wave spectrum (which can provide breakneck speeds but can’t cover wide geographic areas).

That said, all of the operators are working on expanding their 5G networks, and those figures will undoubtedly improve in the months and years to come.

Besides the geographic network coverage, there were some other interesting differences between the operators’ offerings. For example, Verizon’s packet loss was 1.7% on 4G but a “near-perfect” 0.2% on 5G. However, the operator’s latency figures were at 97.5ms on 4G and 121.0ms on 5G that’s far higher than what the other operators clocked.

AT&T’s network showed the best overall performance in most median measurements, but the operator didn’t fare as well in RootMetrics “worst case” findings. “AT&T’s 5G worst-case speed was the only one that came close to meeting the cloud game providers’ minimum speed requirement for casual games in standard definition,” the firm wrote. “While gamers shouldn’t find those worst-case speeds very often (about 5% of the time), they do offer an important barometer for how 5G is advancing the user experience.”

Here’s how each of the operators stacked up: 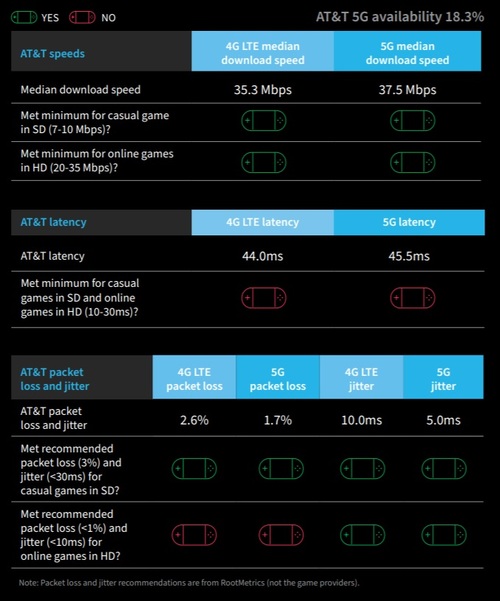 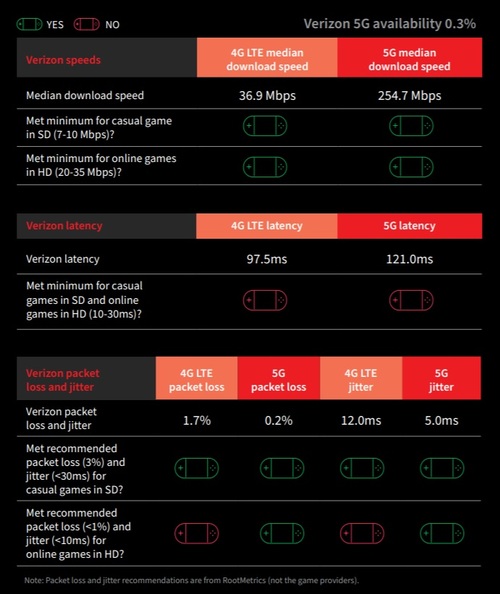 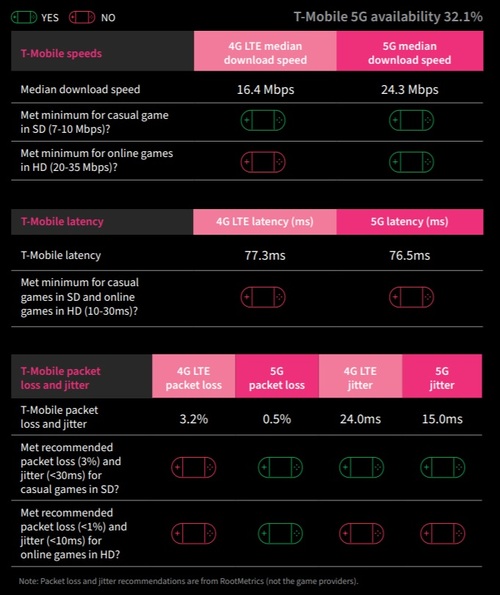 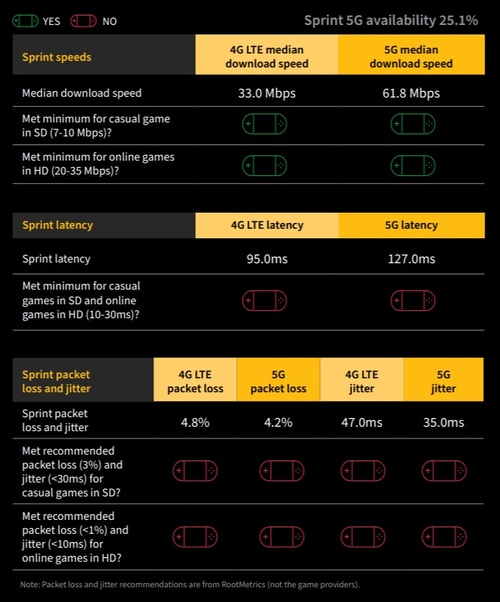 RootMetrics concluded that early 5G networks are almost up to the task of cloud gaming, and the situation is bound to improve. “The 5G landscape is changing fast and the carriers are making great progress, but it will take time before gamers can put away their consoles and start entering Esports competitions on smartphones. Indeed, new technologies always take time to expand and mature,” the firm wrote. “Consider 4G LTE, for example: it took about three to four years for 4G LTE to become ubiquitous for all four carriers across the US, and when it did, the speed and reliability of 4G LTE dwarfed that on 2G or 3G. While 5G is being rolled out in a phased approach, that process has begun in earnest, and the future of 5G and mobile cloud gaming is clearly bright.”