AT&T has quietly halted sales of AT&T TV Now, a no-contract, slimmed-down pay-TV streaming service that debuted as DirecTV Now back in late 2017. 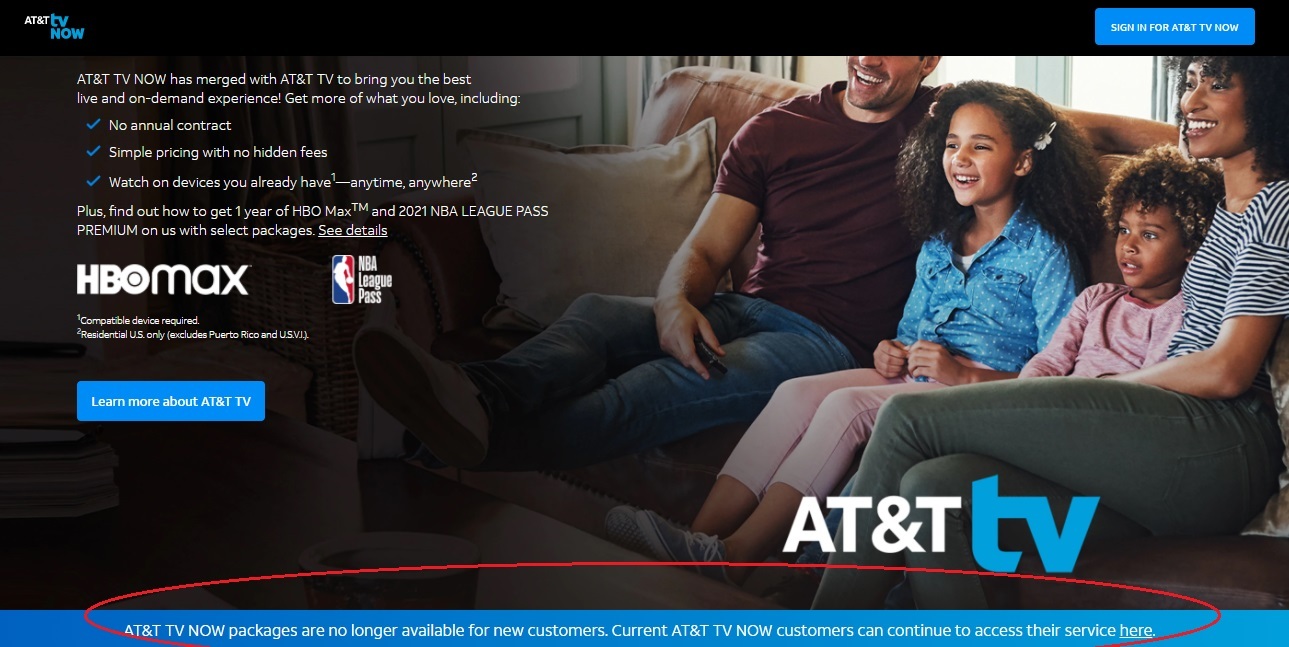 Click here for a larger version of this image.
(Image source: AT&T)

AT&T said the decision stems from a plan to streamline its OTT offerings and drive more value into its pay-TV services.

“AT&T is simplifying its over-the-top video offering for customers, with AT&T TV and AT&T TV NOW merging into one blockbuster experience,” an AT&T official said via email in response to questions. The official noted that the “Entertainment” package on AT&T TV offers 20 more channels than the old entry-level package on AT&T TV Now, and that all AT&T TV monthly-contract packages come with 20-hours of cloud DVR storage included.

“We’re bringing more value and simplicity by merging these two streaming services into a single AT&T TV experience, Vince Torres, SVP, marketing at AT&T, said in a statement. “Customers can stream the best collection of live and on-demand programming on devices they already have, or they can get our exclusive AT&T TV STREAM Device to enjoy enhanced features and functionality.”

AT&T noted that existing AT&T TV Now customers can continue to use the service and won’t experience any disruptions as part of this change. The company has not announced if there is a plan underway to eventually phase out the AT&T TV Now service altogether. AT&T launched the skinny-bundle streaming service in November 2017 as DirecTV Now and rebranded it as AT&T TV Now in July 2019.

The decision comes as AT&T looks to slow the pace of pay-TV subscriber losses and, more generally, improve the profitability of its pay-TV service. AT&T is putting more weight behind the contract-based AT&T TV service, which launched nationally in March 2020, as well as HBO Max, the supersized subscription VoD streaming service that debuted on May 27, 2020.

In a regionally focused side note, stopping sales of AT&T TV Now to new customers takes the only no-contract streaming option off the table for Denver-area consumers seeking access to Altitude TV, the regional sports network that serves as the TV home of the NBA’s Denver Nuggets and the NHL’s Colorado Avalanche. Altitude is available on the contract-based DirecTV and AT&T TV services, but is still locked in a carriage dispute with Comcast and Dish Network.

AT&T has been fading out older products of late. It stopped selling U-verse IPTV service to new customers in April 2020, and did the same with DSL in October 2020.