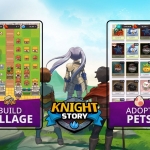 The leading blockchain game development studio migrates from EOS to TRON
SAN FRANCISCO–(BUSINESS WIRE)–#BlockchainForEveryone–After much anticipation, TRON announces its partnership with Biscuit to build and distribute the next generation of blockchain games with the goal of accelerating adoption. TRON joins as a strategic investor to the promising blockchain game studio, widely celebrated for its chart-topping hit, Knight Story (previously EOS Knights).

Knight Story topped the charts across all public chains in terms of DAU and transaction volume from 2018–2019. Players loved the RPG’s cute character models, polished UI, and plentiful rewards. Many played the game ferociously to upgrade their heroes and raid harder dungeons — with the dream of striking it rich on a legendary piece of treasure. The formula was addictive. According to Dapp.review Knight Story had over 6,000 daily players and brought in almost $20,000 in daily revenue at its peak.

The partnership will begin with the release of an upgraded version of Knight Story, built using the TRON blockchain, in December 2019. The game will be available for download on most iOS and Android devices and feature a revamped economy powered by TRX and TRC-based tokens (including NFTs). Players will accrue value from their gameplay, with even greater earning opportunities on the horizon as TRON continues to grow.

Biscuit chose to migrate its next iteration of Knight Story from EOS to TRON to take advantage of the TRON network’s performance, developer-friendly tools, and a robust ecosystem of applications. For the Biscuit team, building on TRON presents greater opportunities to create synergistic partnerships and attract the largest audience possible.

Jay Lee, CEO of Biscuit says, “We are very excited to partner with TRON and we’re eager to see Knight Story thrive on the TRON network. This collaboration will help us to realize Biscuit’s mission and continue to innovate games using blockchain technology.”

Likewise, TRON has been inspired by the Biscuit team’s prodigious development talent and passion for enabling greater blockchain adoption. As such, in addition to investing through the TRON Arcade fund, TRON intends to support the project as the game’s publisher. TRON plans to promote Knight Story throughout its expansive distribution network that includes partner ecosystems like BitTorrent and Opera. In total, TRON will distribute Knight Story to hundreds of millions of players, making this the most ambitious DApp ever launched.

Justin Sun, CEO of TRON & BitTorrent says, “There has never been a decentralized game of this scale before. Biscuit’s successful rollout of blockchain gaming for mainstream audiences marks a turning point for the space. I want to thank Biscuit for their hard work and passion for blockchain. Together, we will create a blockchain for everyone.”

Biscuit Labs is a development team that launched the legendary first-generation blockchain game, EOS Knights accounting for more than 66 million transactions. The team is focusing on overcoming the UX challenges of blockchain to create innovative games and applications.

Led by CEO, Justin Sun, TRON is dedicated to creating a boundary-free internet that inspires innovation across industries. The team is working hard to return security and ownership to the people. With the acquisition and integration of BitTorrent, TRON is the largest decentralized community in the world. The protocol offers high scalability and reliability to give decentralized application (DApp) developers the ability to create the best user experience possible. Join our community and help enable blockchain for everyone.

You can learn more about TRON at www.tron.network and the following socials: