Brits under lockdown. It could be a new Sky series, a sort of neighbors-from-hell documentary aimed at Brexit-bothered Europeans, to whom the British have long been a bunch of pasty-faced, beer-swilling malcontents.

There would be no shortage of material for the pilot episode. Raiding a Sheffield pub flouting the lockdown, police this week caught several drinkers hiding sheepishly in its cupboards, presumably polishing off their pints in semi-darkness. Elsewhere in Blighty, one woman seated on a park bench was filmed arguing with a police officer about her right to be outdoors when she was not visibly doing exercise. “I’m exercising my mind,” he was told.

But those disregarding the lockdown (and various other inconvenient laws about property damage) to burn down 5G masts would have to open the show. While networks have been damaged in other countries, Europeans just haven’t entered into the whole spirit of mast burning with the same enthusiasm as the Brits. It’s become as peculiarly British as cheese rolling or gurning just as bonkers and yet far more damaging. Unless someone is in the path of a large, high-speed cheese, that is.

Proof of its Britishness came in data supplied this week by Europeans. Brits don’t usually top any rankings where connectivity is concerned, coming third from bottom in a recently published table showing rates of full-fiber penetration. But they are way out in front on mast attacks, says Agoria, a Belgian industry association. As of Wednesday, the UK accounted for 61 of the 88 that had been recorded. In second place, the Netherlands could manage only 20. Ireland had three, while Italy, the Czech Republic, Sweden and Belgium itself were languishing with one apiece. 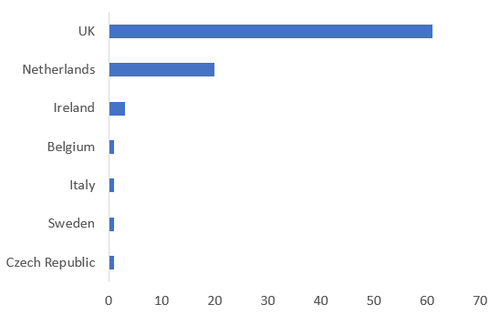 Masts are going up in flames because they stand accused, along with China, of spreading coronavirus. It’s not clear how the arsonists have figured this out. You don’t see many 5G basestations with breathing difficulties or a dry cough, spewing up their circuitry while non-infectious 4G antennas claim herd immunity. Perhaps they’re all asymptomatic. Maybe some have been mainlining Dettol.

Whatever the story, mast burning just hasn’t taken off in most countries. It’s hardly a shocker in Italy and Spain, where lockdowns are so aggressively policed that even sticking your leg out of the front door risks a fine. But the Swedes haven’t been able to muster the energy for more than one attack despite having almost total freedom of movement.

Many of these countries still lack much 5G infrastructure, of course, and so vandalism could ripple across the region as networks are powered up. Europeans might also be missing the native-language celebrities who have been educating Brits under lockdown on the dangers of 5G. David Icke, a soccer player turned conspiracy theorist (which possibly tells you all you need to know), has marshaled the anti-5G forces in the UK, ably assisted by Amanda Holden, a reality TV pundit, and Eamonn Holmes, a journalist in the loosest sense of the word who ironically shares his surname with one of the most brilliantly minded detectives in fiction. Before he discovered that 5G networks are ridden with the plague, Icke figured out that he was the son of God. Then he decided humankind had been infiltrated by reptiles from outer space. You get the picture.

What’s really surprising is that mast burning hasn’t caught on in the States. Last week there were reports that a cell site had been vandalized in New Jersey, but there has been no bonfire of the antennas in the country that gave us alien autopsies, Creationists and a Dettol-injecting president. It’s surely just a matter of time