Trying to figure out BT’s target headcount is like tackling one of those confusingly-worded mental arithmetic problems given to schoolchildren.

Back in May 2018, the UK telecom incumbent stunned the business community when it announced plans for 13,000 job cuts over the subsequent three years, a figure equal to about 12% of its workforce at the time. This wouldn’t be a net reduction, however, because BT was also looking to recruit about 6,000 employees for network rollout and customer service. Presumably, one should also factor in the 4,000 job cuts BT planned at its global business, announced a year earlier? It wasn’t entirely clear if these formed a part of the 13,000 or were in addition to it.

Further bafflement came when BT last week said this “transformation program” was already almost complete about a year ahead of schedule. In fact, BT had over-delivered on its 1.5 billion ($1.9 billion) cost savings target, having reduced annual costs by roughly 1.6 billion ($2 billion), according to Simon Lowth, BT’s chief financial officer. Only 9,000 roles had been cut, though. That sounded like the job was 70% done, rather than “largely complete.” Alarmingly, for employees, BT was also referring to the program as “phase one” of its transformation. No one said anything about phases back in May 2018.

What’s abundantly clear is that BT’s headcount has barely changed in the last two years. In March 2018, several weeks before it kicked off what is now “phase one,” the operator had precisely 105,787 employees on its books. Two years later, as accounts showed last week, the number was 105,344. In other words, the net reduction was 443 jobs not 12% or 9% or even 3% of headcount, but just 0.4%.

There is not a vast difference even if the recent March figure is compared with BT in 2016, when the company, fattened by its takeover of EE, was at its biggest in the modern era, with 106,416 employees. The headcount reduction of 1,072 over that period is only a 1% cut. BT looks as bulky as ever.

Its composition is certainly different, though. A closer look at the figures shows that its ailing enterprise unit in for a tough time during the coronavirus pandemic shed 1,054 employees in the two years to March 2020. The mysterious “other” category, likely to include some central services, lost 4,012 employees in a dramatic downsizing that culled 15% of jobs. The global business also shrank, albeit by only 657 jobs, or 4% of its total. At the same time, BT’s consumer division and Openreach networks business have grown substantially consumer by 1,436 jobs, or 8%, and Openreach by 3,844 roles, or 12%.

If all this shapeshifting has better prepared BT for today’s realities, it cannot be dismissed. Besides a virus that has driven people out of the office and into the home, BT now faces more aggressive competition in the consumer market and a government urging it to speed up network rollout. Hiring technicians and customer service assistants, and dispensing with mid-level managers, looks smart.

But if layoffs have brought some savings, it is mainly because BT is paying the new staff less than it rewarded the old staff. Organizationally, BT is not really any smaller than it was three years ago. What’s more, while annual operating costs are down from 20.9 billion ($25.8 billion) to 19.6 billion ($24.2 billion) in the last three years, BT’s revenues per employee have also dipped, falling from about 226,500 ($279,700) to around 216,700 ($267,600) over this period. Most peers have registered improvements, and BT already made substantially less in per-employee revenues than any other major operator in Europe or the US. 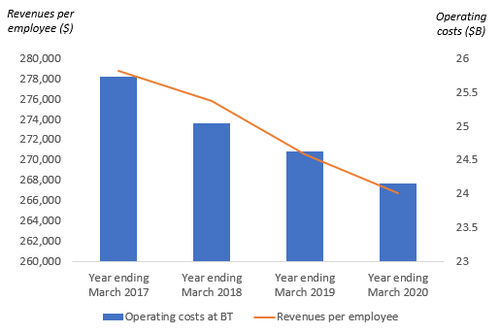 Nor does BT appear to have made a lot of progress on its technology overhaul. To hear it from CEO Philip Jansen, parts of BT sound like the telco equivalent of an ox-driven plow in a world of autonomous tractors. Extensive use of legacy networks is holding it back, he told analysts on a call last week. Moving a customer from a part-copper broadband service to a full-fiber one takes as long as 16 days. The only fully automated, “zero touch” service in the entirety of BT’s estate is TV sports.

Even more shocking, perhaps, was the revelation that 14 million customers are still on the old-fashioned public switched telephone network (PSTN). This, remember, comes about 16 years after BT first unveiled 21st Century Network (21CN), the all-Internet Protocol network that would supposedly replace the PSTN. 21CN is now an ignominious footnote in BT’s history, while the PSTN like an irritating movie villain simply refuses to die. Not until 2025 will it finally be vanquished, said Jansen last week. Who knew the 21 in 21CN referred to the number of years the transformation would take?

By then, BT expects to have slashed annual costs by another 2 billion ($2.5 billion), partly by junking real estate and old IT systems, partly through automation. Combined with the all-IP transformation, the rollout of full-fiber networks to about 20 million homes should allow BT to manage with just 1,000 national exchanges, down from 5,500 today. Copper switch-off, said Openreach CEO Clive Selley, would allow BT “to close the PSTN and expensive legacy infrastructure that consumes vast amounts of maintenance labor and a lot of electricity.”

Staff might have felt encouraged by the recent promise of “no job losses related to the coronavirus crisis for the foreseeable future.” But the important words in that commitment are the last nine, and especially the last four. Phase one was about a 1.6 billion ($2 billion) restructuring that has failed to shrink the beast. A 2 billion ($2.5 billion) “modernization” seems bound to, as investors upset by recent dividend cuts scour financials for any sign of inefficiency.

Revenues per employee in most recent fiscal year ($) 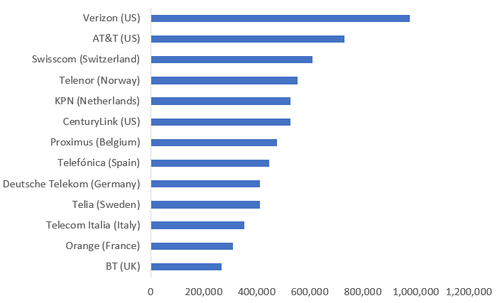 Coronavirus might not trigger immediate cuts, but it has certainly created the conditions for a more urgent overhaul of the BT business. “Zero touch,” a nasty bit of industry jargon previously consigned to the trade show circuit, is now lodged firmly in the management lexicon, ushered in by the pandemic, a kind of telco adjunct to social distancing. “By the end of 2025, we expect to make the majority of high-volume customer journeys fully automated and zero touch,” said Jansen last week. Never BT’s strong point before, efficiency may become the measure by which he is ultimately judged.