TeraGo, which sells connectivity and cloud services to thousands of business customers in Canada, has decided to step into the 5G industry.

Starting next year, the company said it hopes to begin transitioning its existing fixed wireless services to the 5G standard with equipment vendor Nokia and customer premises gear from Askey Computer and Inseego.

Already TeraGo has started 5G technical trials at its offices in Toronto, with initial speeds of up to 700Mbit/s and latency of 3ms to 4ms.

The company said it expects to begin customer trials in the second half of 2020, which is a slight delay from its original plans due to COVID-19.

Eyes wide open
TeraGo is no stranger to fixed wireless or millimeter wave (mmWave) spectrum. “We understand this business quite well. Fixed wireless is not a new concept to us,” Ciciretto said.

He explained that TeraGo acquired substantial mmWave spectrum holdings via government auctions in 1999, and the company has added to its 24GHz and 38GHz holdings through spectrum acquisitions thereafter. That spectrum, coupled with the company’s fiber network, forms the basis for the connectivity and cloud services it sells to around 3,000 business customers across Canada. 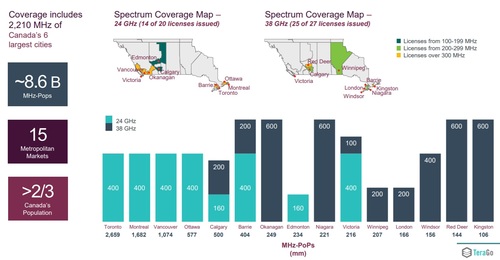 TeraGo touts a leading position in mmWave spectrum in Canada. Click here for a larger version of this image.
(Source: TeraGo)

TeraGo executives said they expect to gradually add 5G equipment to the roughly 600 rooftop transmission sites the company owns across major Canadian cities, including almost 200 in the greater Toronto area.

However, to be clear, Ciciretto said that TeraGo will step into 5G carefully and gradually. He said the company initially expects to sell 5G services to business customers, and would only consider an expansion into the consumer market if TeraGo is able to find suitable partners for real estate, capital and back-office services.

And Ciciretto acknowledged that TeraGo would need far more transmission locations to offer services broadly across its metropolitan markets, as well as financial investors to help pay for such a buildout.

That said, Ciciretto remains optimistic. “We haven’t seen a shortage of interest” in 5G services, he said. “We’re very excited about the 5G possibilities. … To us it makes logical sense to take the next step.”