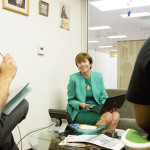 ORANGE, Calif.–(BUSINESS WIRE)–#ChapmanU–Helen Norris, Chapman University’s vice president and chief information officer (CIO), has been elected to the board of EDUCAUSE, described by its leadership as “a non-profit committed to advancing higher education through the transformative use of information technology.”

“As a leader in the field of information technology, Helen is particularly suited to advance the work of EDUCAUSE,” says Daniele Struppa, president of Chapman University. “Through her vision and enterprise, IT at Chapman is now a robust, user-centered experience with a focus on all campus constituents and an eye on the future.”

As Chapman’s CIO, Norris has improved security through education and the implementation of technical tools, strengthened IT services for students by providing online resources such as Adobe Creative Cloud, acquired research computing tools for researchers and staff, integrated technology into new campus buildings and amplified the wireless footprint of campus. Additionally, Norris has transformed the IT organizational structure and partnered with the faculty senate and the Office of the Provost to select a new learning management system, Canvas. Norris is also responsible for the creation of Chapman’s first data warehouse, Panther Analytics, and for a number of systems improvements campus-wide.

Norris is a trustee of the National Endowment for Financial Education. She also serves on the board of the Southern California Society for Information Management and the governing board for the CIO Summit in Los Angeles. Additionally, she is a member of the board of advisors for EmpowHer Institute, whose mission is to empower young women through education, training and mentorship as they prepare for college and their careers.

Norris is a regular contributor to the CIO Talk Network, where she writes blog posts on topics of interest in technology. She is a 2013 fellow of the EDUCAUSE Leading Change Institute. “It’s a great honor for me to be selected to the board of EDUCAUSE. I believe in using technology to drive change and improve education,” says Norris. “As a woman in the field of IT, I hope to be part of EDUCAUSE’s work in creating equitable spaces for diverse groups in higher education.” Prior to joining Chapman, Norris served as the associate CIO at California State University, Sacramento and as a senior IT director at the University of California, Berkeley.

Originally from Ireland, Norris holds a bachelor’s degree in Mathematics from Trinity College, Dublin, Ireland, and a master’s degree in Computer Resource Management and Business Administration from Webster University in St. Louis.

Founded in 1861, Chapman University is California’s third largest private university. Chapman is categorized by the Carnegie Classification as an R2 “high research activity” institution and offers personalized education to more than 9,000 undergraduate and graduate students. The campus has produced a Rhodes Scholar, been named a top producer of Fulbright Scholars and hosts a chapter of Phi Beta Kappa, the nation’s oldest and most prestigious honor society. Based in the City of Orange, Chapman also includes the Harry and Diane Rinker Health Science Campus in Irvine. In 2019, the university opened its 11th college, Fowler School of Engineering, in its newest facility, Keck Center for Science and Engineering. Learn more about Chapman University: www.chapman.edu.
Contacts
Pamela Ezell
Assistant Vice President, Communications
(714) 289-3129 office
[email protected]