Ciena ended an impressive year of sales growth with a 7.6% rise in fiscal fourth quarter revenues to $968 million and a 15.4% hike in fiscal full year sales to $3.57 billion, roughly in line with Wall Street’s expectations but way ahead of the average market growth.

Here are the main year-on-year comparisons: 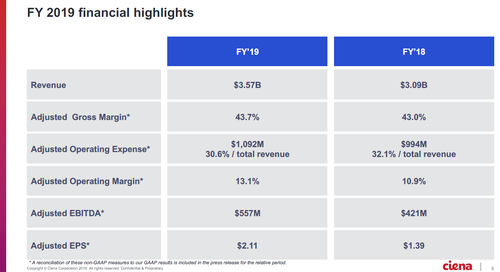 But the big question now, though, is — where does the company go from here? Can it sustain such stellar sales growth?

That’s asking too much, especially in a market where capex is still relatively constrained, despite the 5G noise, so the expectations for the next three years is revenue growth in the 6-8% range, which is still impressive. The past fiscal year’s 15.4% sales leap was driven by extraordinary demand from webscale companies and Tier 1 operators that can’t be sustained: But those companies are still investing in new transport networks and additional capacity and Ciena expects to be picking up more than its fair share of the spending and continuing to grow its market share.

Add to that trend the company’s ongoing cost controls and the imminent arrival of its next-generation WaveLogic 5 programmable coherent modem, which is capable of up to 800Gbit/s transmission, and Ciena’s immediate future looks pretty good. Investors scrambled for a piece of the action and gave the vendor’s share price a 15% boost to $40.79, a level not reached for the past three months but still some way off the year’s high of $46.78.

So how does the company see the next few years? There were many cautious questions on today’s earnings call, given the “lumpy” nature of the optical sector, where operators have long lead times, have intensive bursts of spending and then scale back as they look to get a return on their investments. And it’s notable that Ciena has driven a hefty chunk of its sales from just a few companies in the past year: Three 10%-plus customers generated 34.1% of total revenues during the fiscal year — that’s nearly $1.22 billion from a trio of buyers. If any of those three scale back their network investments it would impact Ciena’s numbers.

But CEO Gary Smith says his team has considered all of this and the bullish forecast takes into consideration potential hurdles. He says the company has a broad range of webscale customers and that while their investments in the coming year will be more modest, they will still be major spenders: In the past year this category accounted for 22% of Ciena’s total sales and the vendor boasts a data center interconnect (DCI) market share of more than 50%.

Here are the key financial expectations, including increasing revenues and improved operating margins. 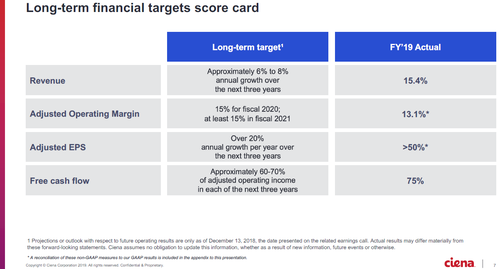 The coming year’s sales growth is expected to be at the lower end of that range, which will give Ciena fiscal year 2020 sales of about $3.8 billion. There won’t be any one part of the market that will spike, noted Smith and his CFO Jim Moylan — growth will be across all geographies and all customer verticals (telcos, webscales, cable operators and enterprises). Indeed, Smith noted that Ciena now boasts all major North American cable operators, and many international ones too, as customers.

“We have such breadth and scale now we can withstand any bumps we are not counting on miracles [to hit targets],” noted Smith. “We have a very good understanding of [customer and market] dynamics and great customer relationships” that give Ciena clear visibility into what is coming down the pipe, added the CEO.

“We feel great about 2020,” stated Moylan on the earnings call.

That confidence is spurred in part by the commercial arrival of WaveLogic 5, which Smith says is already in the hands of many customers, will be commercially available early next year — way ahead of any other commercial 800G offerings, claims the CEO — and which will start to generate meaningful revenues in the second half of next year.

Ciena, naturally is confident that network operators will migrate from 400G line side interfaces, which are becoming the industry norm, straight to 800G, bypassing the 600G options that are being offered by rivals such as Infinera, which has been showing signs of recovery lately.

That leap to 800G may happen in some cases, of course, but as Ciena hasn’t developed a 600G solution it’s not going to peddle any other story.

In the meantime, Smith and his team can reflect on a strong year and market cheer, but in the knowledge that the networking industry has a nasty habit of unsettling even the best laid plans.