Cisco: Service Providers Are Getting Squeezed & We’ve Got the Cure | Light Reading

12 Dec Cisco: Service Providers Are Getting Squeezed & We’ve Got the Cure | Light Reading

Cisco had a grand plan to help service providers break free from the squeeze between increased bandwidth demand and declining revenue per user. And the same plan is Cisco’s hope for being squeezed out of a market dominated by hyperclouds who prefer DIY to readymade solutions.

Cisco’s “Internet for the Future” strategy, announced Wednesday, is a bold play to help service providers thrive in a difficult business environment. It’s also Cisco’s ambitious bid to redefine its business to remain relevant to the rapidly transforming service provider and hypercloud market.

“This is a big deal,” Patrick Moorhead, president and principal analyst at Moor Insights and Strategy, tells Light Reading. “We were wondering for years how Cisco will keep relevance with service providers, with Cisco’s service provider revenue going down.”

The strategy comprises new silicon, software, photonics, as well as a new, disaggregated business model for Cisco to sell its components and software separately. The new Cisco Silicon One architecture scales from low-end switches to high-end core routers. Cisco also introduced its new, streamlined network operating system software, IOS X7. And the vendor debuted its first equipment using the new silicon and software, the 8000 Series, combining the capabilities of a switch and router. 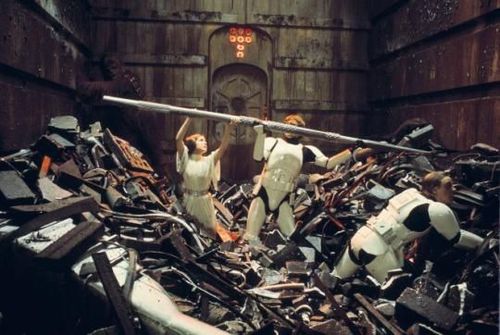 Service providers are trapped in a metaphorical trash compactor, caught between increasing bandwidth demand and declining revenue per user.

Cisco Silicon One is key to Cisco’s new strategy, Moorhead says. Cisco Silicon One replaces four or five silicon types, for different parts of the network, with one approach, with individual 300 watt chips that can logically be aggregated in modules of up to 1,024 instances to match increased demands for high-end routers.

“From an efficiency standpoint, the benefit to Cisco is of writing to one architecture rather than four or five different architectures,” Moorhead said. “The savings is immense.”

The new Cisco architecture promises to give SPs the benefits of edge computing without the need for excessive decentralization. With faster core networking and faster connectivity, service providers can put services closer to the core and have more efficient usage, as opposed to putting equipment at the edge. “The biggest challenge to edge computing is to have enough customers using it that it’s not just sitting there idle after you made the investment in infrastructure at the edge,” Moorhead said. Putting resources closer to the core makes it easier for service providers to generate revenue because connectivity is more efficient.

As part of the new strategy, Cisco is shifting its business model to disaggregate hardware from software. “The way customers want to deliver our technology has fundamentally changed,” said David Goeckeler, Cisco executive VP and GM of networking and security business. Previously, Cisco packaged its components and software into complete solutions. Though most customers will continue to buy solutions, Cisco will also deliver its silicon to run as a components in white boxes, running other vendors’ software or open source code. And Cisco will also run its operating system on other vendors’ infrastructure or white boxes, Goeckeler says.

That makes Cisco a player for a new class of service providers — the hyperclouds, such as Facebook and Microsoft Azure, who choose to design their own networking equipment and customize their own software based on open source technology, rather than buying off-the-rack clothes from vendors like Cisco. And it’s not just the hyperclouds operating that way; AT&T is pursuing an aggressive white box strategy. And indeed Facebook, Microsoft and AT&T were among the companies who took the stage this week to support Cisco’s strategy.

‘Backbone foundational technology’
Cisco is tying its “Internet for the Future” strategy to a vision of continuing the 20-year legacy of Internet innovation, and driving creativity for a generation to come.

“We are trying to create the backbone foundational technology that is going to power the future applications of the Internet,” CEO Chuck Robbins said at an announcement event for press and analysts in San Francisco on Wednesday.

Cisco foresees 49 billion devices connecting to the Internet by 2023, with 4.8 billion users and the average person having 3.6 Internet connected devices on their bodies or with them, Robbins says. “This is all creating an incredible capacity issue for the Internet as we know it today,” Robbins said.

“When these people press whatever button it is they press to make things happen, they don’t think about it unless it doesn’t happen,” Robbins said. Cisco’s mission is to give network operators the tools to continue allowing ordinary users to continue to avoid thinking about the network.

5G, which will roll out in phases over years, will require reduced cost and increased capacity, speed and trust. Cisco sees its new silicon, networking equipment, operating system, cloud services and business model as key to delivering on the promise of 5G hype, Robbins says.

For network operators, the Q100 will provide a unified experience, behavior, features and underlying device architecture across the network, for development simplification and operational simplicity, easier operations, management and troubleshooting, Dagan said. The architecture will scale up and down for different use cases.

Cisco introduced its 8000 Series networking equipment, based on the Q100 silicon, which starts at a 1 RU system that runs at 10.8Tbit/s up to an 18-slot chassis running at 260Tbit/s. And the system uses 75% less power than competitors, Cisco claims.

Cisco introduced a cloud-based service for both the new 8000 Series and its existing product lines, to simplify testing and validation. Operators upload their configuration and test in the cloud, dramatically reducing the time to test and therefore time to deployment, Davidson says.

And optics is “one of the key technology pillars for networking,” says Bill Gartner, Cisco SVP/GM optical systems and optics group. Optics is becoming more important as faster network speeds make optics a bigger part of overall equipment costs. Optics were 10% of equipment costs at 10Gbit/s speeds, 50% of cost at 100Gbit/s and will be 70% at 400G. “We can’t ignore what will be 70% of the cost,” Gartner said.

Additionally, Cisco “wants to control its own fate on optics,” Gartner said.

And CenturyLink sees the Cisco technology as key to integrating switching and routing into a unified cloud, reducing cost and driving simplification, putting optical, IP and switching on a single platform, says Ryan Korte, CenturyLink’s senior director of Internet, CDN and media architecture.

Who should be scared
Cisco’s announcement is bad news for Broadcom, Arista and Juniper, Moorhead said. Though the market operates slowly and the game will take a while to play out, the new Cisco architecture announcement is a signal that Cisco is stepping up the competition with those companies, the analyst said.

“Arista was one of the only high-speed guys in town,” Moorhead said, in applications requiring low latency, such as high-frequency training.

Arista’s strength is in the data center, Ray Mota, CEO and principal analyst at ACG Research, tells Light Reading. Indeed, Microsoft’s presence supporting the Cisco announcement is noteworthy in part because Microsoft is a marquee Arista customer, accounting for a big chunk of that vendor’s revenue.

As for Juniper, that vendor makes most of its revenue from core networking for service providers, which Cisco is now encroaching on. And Juniper is already in trouble.

Find out what you need to know about the 5G network revolution at Light Reading’s 5G content channel.

“And Broadcom is the biggest provider of ASICs to DIY customers in the cloud, and Cisco just got into that business,” Moorhead said. (Cisco, though, says it’s not a threat to Broadcom — Cisco is a big Broadcom customer.)

“For the past several years, the story we heard was that Cisco’s efforts in software-defined networking with its ACI would pay off as it shifted its revenue mix from hardware to annual software licensing,” Raynovich writes. “But Cisco is embracing cloud-native software that has grown faster than its own.” That includes SONiC and the P4 programming language.

“All of this, of course, is the product of very difficult market changes,” Raynovich says. “Over the past few years, Cisco and other networking systems players such as Juniper Networks, Nokia, HPE and Ericsson (and many others) have struggled with large macro shifts in the market. The center of gravity in networking and compute infrastructure shifted away from service providers and enterprises to cloud and ‘webscale’ players, who are now spending more on networking hardware and software.

“In addition, many cloud players, especially the largest ones such as Amazon, Google and Microsoft, have become the innovators themselves, finding new ways to build infrastructure by piecing together their own hardware and software rather than buying from independent OEMs. At the same time, the service provider market has stagnated, as the workloads move to the cloud and capital spending budgets have flattened. That has made it real tough to be a Cisco, a Juniper or an HPE,” Raynovich says.

“In a sense, [embracing cloud networking software] is an admission of failure” for ACI and Cisco’s other networking software, Raynovich says. “And on a larger scale, it’s also a huge shift in focus. Rather than transitioning to cloud software — an area that VMware and Red Hat (IBM) have mined quite well — Cisco is doubling down on hardware, fortifying its DNA as a hardware player.”

Says analyst Moorhead, “The big question was what is Cisco’s play going to be. We have our answer.”