On December 11, 2019, Cisco revealed breakthrough innovations in silicon, optics, software, and systems so impactful that we’ll be talking about it for decades to come, as the economics of the Internet will forever change.

Internet Protocol (IP) is the universal language upon which the Internet is built, giving rise to new ways to work, facilitate business, interact with one another, and educate. At the center of this transformation lives service providers who’ve been leveraging the same tools that have bounded them to their current economic fate.

As the Internet is on the verge of becoming massive (users, content, machine communication), our current networking tools will break the economic models. This has forced new engineering innovations that will provide the methods to enable the construction of the next phase of the Internet, dramatically improving capital investments and making operations far more efficient than what is currently available.

Silicon
As a leading innovator in the industry, and despite the mounting challenges in investing in new silicon architectures, it was not thought possible to develop a single silicon architecture that could serve the needs of both intense routing processing and streamline traffic use cases. Until now.

Cisco developed one silicon architecture to solve multiple market needs, form factors, and roles within the system, that could scale, as required, without making compromises. The Cisco Silicon One family is the first silicon available in the market that satisfies all of those requirements. 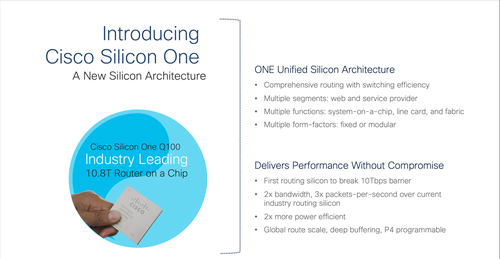 Optics
The higher speeds required of the new Internet won’t be achievable if the optics connecting the routers and switches can’t keep pace with the silicon that drives them. Therefore, as Internet traffic and speeds continue to increase, optics has a critical role in driving architectural transitions.

The result is that as the bit rate increases, pluggable optics represent a more significant fraction of the total hardware cost. For example, at 10G, optics represented about 10 percent of the entire hardware cost of a data center network. As we progress to 400G and beyond, that equation flips, and optics will represent more than half of the total hardware cost. To break this imbalance between optics and silicon cost curves, Cisco is investing in technologies like silicon photonics and coherent digital signal processors, via the Core Optics, Lightwire, and Luxtera acquisitions that will drastically change the economics of optics for the Internet.

Software
The seventh generation of IOS XR inherits some critical new developments that were set in motion a few years back to simplify the foundational architecture, to modernize how it participates in network operations, to build a foundation of trust, and to leverage cloud-enhanced automation tools.

Simple
IOS XR7 architecture is simpler and leaner by enabling customers to pick and choose the software packages they require to run their network.

Trustworthy
More than ever, security is top-of-mind for service providers as the surface attack is getting more prominent due to an ever-increasing number of things getting connected to the network.

Enforcing trust is only possible with a trusted network operating system (NOS) running on a trusted platform spanning the trusted full stack, starting with silicon, hardware, NOS, and third-party applications to run.

Cloud-enhanced
IOS XR7 is now capable of taking advantage of cloud-enhanced automation software as a service via Crosswork Cloud to enhance operations and lower the time to remediate complex networking problems.

Systems
With new silicon and new software, Cisco built entirely new systems that have the performance, efficiency, and operational improvements to meet the massive demand the Internet will require in the future. The Cisco 8000 series routers are optimized for 400GbE and beyond while providing market-leading power efficiency per 100G. The Cisco 8000 series routers are available in five models scaling up to from 10.8Tbps to 260 Tbps respectively.

New Architectures for a New Internet

With innovations in silicon, optics, software, and systems, entirely new architectures will become possible for the Internet for the future. Architectures that take convergence to altogether new heights resulting in 59 percent improvement in the capital efficiency of the overall infrastructure. Architectures that start with an operation first mindset, unlocking up to 68 percent operational improvements in overall utilization and accelerate an 81 percent faster time to deploy new or existing services.

Service providers finally have a path forward from the bondage of the tools and economic models that have left them stranded as they search for new tools to solve not just big problems but massive ones – – all while redefining their economics. Learn more by visiting https://www.cisco.com/c/en/us/about/internet-building-blocks.html