CommScope has kicked off a plan to evaluate the health of its full portfolio of products and businesses under the direction of new CEO Chuck Treadway.

That evaluation – part of a broader initiative called “CommScope Next” – will result in the company reallocating resources to businesses that offer the most potential and value to it in the near- and long-term. That process could also lead to the shedding of some pieces to CommScope’s portfolio as well as additions through strategic acquisitions. 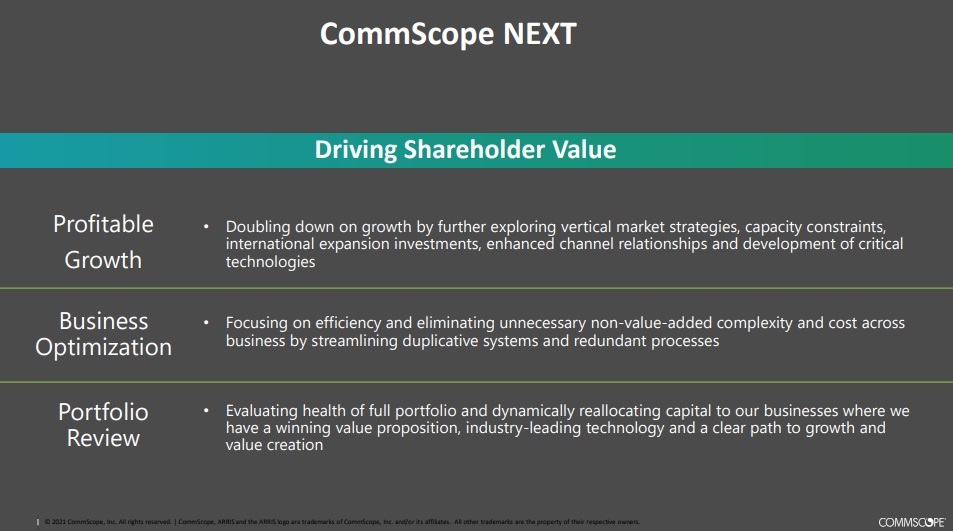 CommScope launched its ‘NEXT’ initiative in January, though specific details about actions that will result from it won’t be shared until later this year.
Click here for a larger version of this image.
(Source: CommScope)

“In our businesses that are more commoditized, we’ll either manage those for cash or, where appropriate, evaluate alternative ownership structures that can unlock greater shareholder value,” Treadway said today on CommScope’s Q4 2020 earnings call.

While that statement will likely fuel more speculation that CommScope will seek out alternatives for its struggling video consumer premises equipment (CPE) business, the company isn’t ready to spell out exactly how its strategy will take shape.

CommScope will hold commentary on specific plans until he and his team can complete the analysis of the company’s various businesses and product portfolios, said Treadway, who succeeded former CEO Eddie Edwards last fall.

The company originally expected to hold details of a “reset” of the company to get CommScope’s stock back on track until Q3 2021. But Treadway said he’s feeling confident that CommScope will be in position to share “certain aspects” of its broader plan during its Q1 and Q2 calls in advance of an investor day later this year.

Update: Naturally, industry analysts would like to see CommScope provide more specifics sooner than later in order to help with financial modeling and to give them more confidence in the management’s team ability to run the company.

“While we understand the logic of being prudent with guidance while the new CEO has the opportunity to thoroughly review and assess the entire operational picture, decreased disclosures are typically a yellow flag,” Simon Leopold, analyst with Raymond James, explained in a research note. “We understand the rationale of a new CEO; we are hopeful the review goes quickly We harbor concerns that CommScope stops guiding indefinitely.”

Treadway did share a few more details about CommScope NEXT, a program that kicked off in January. In addition to evaluating CommScope’s product portfolio and businesses, a key focus is to drive business growth that outpaces the market, control costs, streamline redundant processes and systems and optimize business performance.

“CommScope NEXT will be a defining chapter for the company, and my highest priority as CEO,” Treadway said. “We will not see the impact of this initiative immediately. In some cases, it will take quarters and, others, longer.”

Some of that activity has impacted the executive makeup of the company. Morgan Kurk, CommScope’s CTO, is now also in charge of CommScope’s broadband networks unit. The company also hired Jack Carlson, a former colleague of Treadway’s, as SVP and chief commercial officer last November.

Q4 has its ups and downs

CommScope’s Q4 2020 net sales dropped 7%, to $2.29 billion, as segments such as Broadband Networks gained while others, including Home Networks, waned.

In addition, the company anticipates seeing some opportunities derived from phase I of the federal government’s Rural Digital Opportunity Fund (RDOF) auction start to surface in the back half of 2021.

RDOF “has generated enormous demand across our portfolio of fiber cable, fiber connectivity and fixed wireless products,” Treadway said. “We’re actively investing in capacity and technologies to meet this demand.”

Sales at the company’s Home Networks unit dropped 31%, to $571 million, as strength in sales of broadband gateways were more than offset by an ongoing decline in CommScope’s video CPE business fueled by pay-TV cord-cutting.

CommScope is also seeing some pressure from a global silicon shortage that is likely to create supply constraints and cost pressure. A bright spot in the segment is a platform win for the XB7, a new DOCSIS 3.1 broadband gateway for Comcast and its syndication partners that also includes support for Wi-Fi 6.

CommScope’s Outdoor Wireless Networks unit saw Q4 revenues rise 1%, to $295 million. The company made note of the start of an aggressive investment cycle from T-Mobile focused on the building out of a 5G network with its new 2.5GHz spectrum. The company also expects to get some lift from the recent C-band auction as operators start to build out networks for that spectrum toward the latter part of 2021 and beyond.

The company’s Venue and Campus Network division saw revenues drop 7%, to $477 million, as its structured cabling business was challenged by pandemic-fueled headwinds that have impacted commercial real estate spending.