“Internet in the sky” projects have had a turbulent ride over the last 20 years.

The satellite industry’s original ambitions were dashed when terrestrial connectivity took off in the early years of the century.

With its Loon program, Google has more recently floated the idea of using giant balloons to provide services to the unconnected.

Now there is a new contender on the runway.

It resembles Aquila in that it would use an unmanned aircraft to provide coverage, but the similarities end there.

Flying at a height of 60,000 feet, a hydrogen-powered plane with a 60-meter wingspan would carry what is pitched as the world’s biggest antenna, measuring about three meters long, to beam high-speed Internet connections into blackspots. 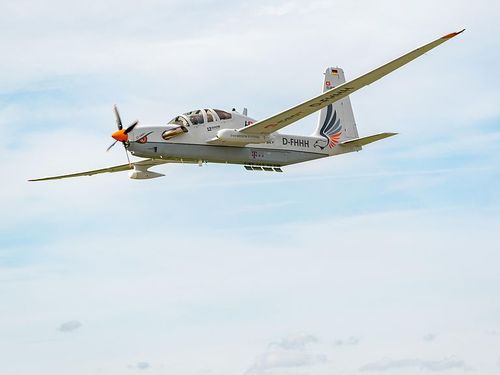 The hydrogen-powered aircraft that would carry a mobile antenna.

Just one antenna could blanket an area of up to 140 kilometers, equal to about 200 terrestrial mobile sites, say the project’s backers. With 60 planes, an operator would be able to fill in all of Germany’s connectivity gaps.

Not pie in the sky

The main sponsor is German telecom incumbent Deutsche Telekom, Europe’s biggest operator, for which this effort is not just pie in the sky.

Evidence of that came this morning when CEO Timotheus Httges led the press conference announcing the still-nameless initiative, previously in stealth mode, to the wider world.

For Httges, the aircraft project is an example of European innovation that goes beyond what China and the US have attempted.

“We are living in a very difficult time and the US and China are decoupling from each other and Europe is sitting aside and watching what is going on and therefore I am happy Deutsche Telekom with its partners is working on deep technology innovation and showing that Europe is in the position to develop its own strategic assets.”

The project has largely been an Anglo-German cooperation with Czech support. It involves a UK firm called Stratospheric Platforms Ltd (SPL), in which Deutsche Telekom acquired a 31% stake last year.

SPL has been developing the aircraft, antenna and hydrogen fuel cell technologies that are needed if the system is going to fly.

During the Bavarian trials, when an aircraft flew at an altitude of 14 kilometers, it was able to guarantee a 4G connection of 70 Mbit/s on the downlink and 20 Mbit/s on the uplink. Those rates would allow users to access a range of advanced Internet applications.

Moreover, because the SPL antenna is fully compatible with 3GPP specifications, it connects to ordinary smartphones and does not require new terrestrial equipment to be installed.

All this puts it far ahead of satellite or balloon technologies, according to Bruno Jacobfeuerborn, the head of Deutsche Telekom’s mobile towers subsidiary Deutsche Funkturm.

“Satellite remains a challenge regarding bandwidth and connectivity,” said Jacobfeuerborn, who has a seat on SPL’s board.

“Balloons are definitely an alternative but they are difficult to control and don’t work in each area of the Earth.” Nor would a balloon be able to carry the same payload as the SPL aircraft, he said.

Despite these trial successes, the industry’s earlier misadventures with flying networks will generate skepticism about SPL’s chances.

For one thing, the opportunity for an Internet in the sky is bound to shrink over the next five to ten years the timeframe Httges cites for commercial readiness as the availability of terrestrial 4G and 5G networks creeps up.

Jacobfeuerborn says there will always be areas that are too expensive to cover terrestrially, but automated, hydrogen-powered aircraft and three-meter antennas do not sound low cost.

So far, Deutsche Telekom has said nothing about the economics, and little about the ecosystem of suppliers beyond SPL.

There are still blanks on the technology side, too.

Many of Deutsche Telekom’s terrestrial 4G sites are now connected to high-speed fiber-optic lines for “backhaul,” which ferries traffic to the core network. How SPL would handle backhaul was not made clear in today’s announcement.

And while antennas are supposedly “frequency-agnostic,” regulatory barriers mean Deutsche Telekom can use only the 2.1GHz band at the moment.

“We are working to be allowed to use more spectrum,” said Jaroslav Holis, a member of Deutsche Telekom’s Prague-based team.

On the plus side, some of the technical challenges to do with hydrogen fuel cell technology have already been overcome. That means SPL is now looking at the commercial development of a plane that could fly unmanned for about nine days in total.

“The production prototype aircraft is due to fly in 2022,” Richard Deakin, SPL’s CEO, told Light Reading.

He expects full operating capability by 2025 and says a first factory would produce about 200 aircraft per year.

The potential opportunity for SPL and Deutsche Telekom goes far beyond the German operator’s European footprint.

Many emerging markets remain poorly served by terrestrial technology, largely explaining why Google and Facebook have taken such an interest in airborne alternatives.

With the right spectrum, SPL’s drones could also eliminate coverage gaps for the “Internet of Things,” providing connectivity for objects in or traversing remote areas.

Httges is personally championing this technology as a flag carrier for his part of the world.

“This is innovation made here in Europe,” he said. “It is not coming from North America or China. Sometimes we lose self-confidence because everything is coming from outside.”

If his own self-confidence can be justified, the sky is the limit.