Remember the 1998 Hollywood movie Armageddon, in which Bruce Willis and Ben Affleck heroically stop an asteroid from destroying the planet?

Deutsche Telekom is eyeing a remake, only this one stars Huawei on a collision course with German officials and a bunch of Teutonic telecom executives in a race to save their network.

Of course, it was probably thinking of the biblical, end-of-days war, and not the blockbuster film, when it reportedly used Armageddon as the name for a scenario in which it has to replace Huawei entirely.

Either way, Armageddon is probably overplaying things a bit. 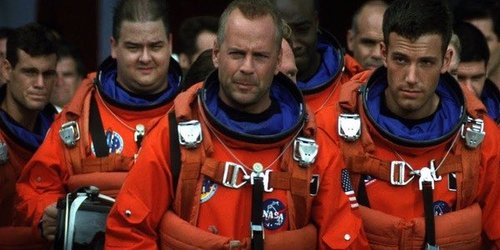 The doomsday forecast is outlined in a paper Deutsche Telekom prepared for a meeting with Huawei, according to Handelsblatt. Seen by the German daily, that paper reportedly puts the cost of replacing the controversial Chinese vendor in Germany at about 3 billion (US$3.4 billion), spread over a five-year period.

That’s an attention-grabbing amount, and nearly twice as much as it would cost the UK’s four mobile operators to replace Huawei, according to Enders Analysis, a market-research firm.

Operators in both countries are under political pressure to ditch Huawei on grounds of national security. The Chinese firm’s opponents insist its products include “backdoors” for Chinese spies to enter the network, snoop around and set boobytraps.

No evidence has been forthcoming, and Huawei has repeatedly denied the allegations, but recent coronavirus-fueled hostility toward China is not helping its case.

On top of that, tougher US sanctions now threaten Huawei’s very survival, according to some analysts. No operator wants to be dependent on a vendor about to go out of business.

And dependent is the operative word, when it comes to Deutsche Telekom. In Germany alone, it relies on Huawei as one of two suppliers of radio access networks (RANs), the other being Sweden’s Ericsson. Huawei also provides Deutsche Telekom with products used in its mobile “core,” the control center of the network where sensitive information is stored.

Previously, it has sold equipment to Deutsche Telekom for use in fixed broadband and optical infrastructure.

All that largely explains why Deutsche Telekom’s swap-out bill in Germany would be so much higher than BT’s in the UK.

Armageddon it is not, though. For a company of Deutsche Telekom’s size, a 3 billion bill would be more like a broken ankle than the end of the world. Unfortunately, the “broken ankle scenario” does not have quite the same ring to it.

Spread across five years, the annual cost of 600 million ($674 million) would equal just 15% of Deutsche Telekom’s net profit, based on the figure last year. As a proportion of the operator’s overall capital expenditure, it would be just 4%.

That considers all the markets where Deutsche Telekom is active, however. The 600 million expense would equal about 14% of what the operator invests each year in Germany.

Even so, Deutsche Telekom can hardly argue switching vendors is so costly it can never be considered. In 2017, it decided it would dump Nokia as one of its two main RAN vendors and move to Ericsson instead. The Swedish supplier has been replacing Nokia kit under that contract.

If it is forced to eject Huawei by government legislation, it could also seek compensation. From a government perspective, 3 billion would be a relatively small expense to safeguard national security. Today, it would barely register alongside the vast sums being spent to keep the economy afloat.

The main worry for Deutsche Telekom is the lack of alternatives to Huawei.

Ericsson is probably at the front of the queue for a core network contract following Deutsche Telekom’s decision to remove Huawei from this sensitive area. Cisco would be an option, but some Germans seem just as worried about US spying through American vendors as they are by Huawei and the Chinese.

The RAN is even more problematic. Transferring Huawei’s business to Ericsson would leave Deutsche Telekom entirely dependent on the Swedish vendor in its biggest European market. Inviting Nokia back would be hard to justify less than three years after the Finnish firm was told to clear out.

Other options include Samsung, a South Korean vendor, and smaller companies selling a concept known as “open RAN,” which promises to make telecom equipment more software-based and interoperable.

That holds appeal for operators that want to see low-cost rivals enter the supplier market, and Deutsche Telekom is already active in open RAN trials, but the technology is still immature. Critics say it does not perform as well as the customized equipment sold by Huawei and Ericsson. It will struggle to close that gap, they reckon.

For German officials, the real concern is the impact a Huawei ban could have on Germany’s deployment of new 5G networks.

Telefnica Deutschland and Vodafone Germany are equally reliant on Huawei as a provider of mobile network products and would also need to find alternatives if a ban took effect.

With its large manufacturing sector, Germany has a greater opportunity than other European countries to use 5G in factory and industrial settings, where it could stimulate productivity. If a Huawei ban is disruptive, German competitiveness may be at stake.