Europe’s telecom firms are lining up their towers in what looks like a gigantic game of Risk, a board game in which players battle for world domination.

Just a day after Spain’s Cellnex announced plans to issue 4 billion ($4.7 billion) in new shares, Vodafone Group has introduced Vantage Towers, the name of the European infrastructure business it has carved out.

As operators compare size, Read must think the view looks good from Vantage.

An initial public offering (IPO) is planned in Frankfurt for early next year, and Read previously reckoned the towers business could be valued at about $20 billion.

Vodafone’s market capitalization this morning was about $42.2 billion, its share price having almost halved in the last two and a half years.

That contrasts with a near doubling in Cellnex stock since early 2019.

Dependable
Investors are drawn to infrastructure businesses because they offer a dependable, long-term source of revenues.

The owners are basically landlords renting out the property that service providers need for their mobile networks. With 5G creeping into sight, towers will be more important than ever.

To Read, spinning off Vodafone’s towers seems like a good way to raise capital in difficult times.

Following setbacks in important markets like India, underperformance in European countries such as Italy and Spain, and the coronavirus outbreak, sales have been falling.

Despite the takeover of cable businesses in Germany and eastern Europe, revenues dipped 1.4% for the April-to-June quarter, to 10.5 billion ($12.2 billion), compared with the year-earlier period. On a like-for-like basis, they were down nearly 3%. 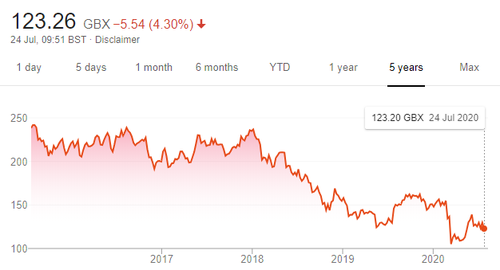 Profitability has improved mainly because of fierce cutbacks.

While Vodafone does not report any profitability metrics in its quarterly statements, its margin for earnings (before interest, tax, depreciation and amortization) rose 1.2 percentage points in its last fiscal year, to 33.1%.

Nearly 16,500 jobs have been cut from the workforce since 2015, partly because of divestments.

Towering inferno?
But in the towers game Read is playing, the retreat from property ownership implies a loss of control that Vodafone might one day regret.

In a complicated setup, Vodafone has been entering into joint ventures at a country level, giving up full ownership of national infrastructure assets.

Following a recent tie-up with Telecom Italia, it now owns just a third of INWIT, the towers venture in Italy. Another deal in Greece, announced today, will leave it with 62% of a joint venture with Wind Hellas, a Greek rival.

Read believes he can minimize the risk by retaining a majority stake in Vantage, essentially a holding company for the stakes in these country assets.

But this peculiar financial engineering could feasibly leave Vodafone with 51% of a company that lacks majority stakes in various European towercos.

There is little sign of this: Vantage points out it has controlling interests in the eight markets of Germany, Spain, Greece, Portugal, the Czech Republic, Romania, Hungary and Ireland.

Vodafone has ceded control in the major market of Italy, though. In the UK, moreover, it owns just 50% of CTIL, a separate, 14,300-site joint venture with Spain’s Telefnica that it now hopes to shift into Vantage.

Bar that transaction, it is now focused on the Vantage IPO and not considering other specific country deals, Read told analysts this morning.

5G holdups
Vantage could also turn out to be very capital-intensive, especially if it is drawn into a fight with other towers companies over 5G infrastructure supremacy.

Only part of the 11 billion ($12.8 billion) that Cellnex plans to invest is earmarked for acquisitions. The rest is intended for construction as it adds new sites and infrastructure to support more advanced 5G services in hotspots.

“As you move to 5G, operators will require increased fiberization of sites,” he said. “We will definitely be looking into that.”

Fail to match Cellnex or other towers companies and Vantage might struggle to attract tenants from outside the Vodafone Group. Pro forma accounts show that only 10% of Vantage’s revenues come from other service providers today.

Conversely, delays to 5G rollout could blight the outlook for towers companies in the next couple of years.

Spectrum auctions in several countries have already been postponed due to the coronavirus pandemic.

Another concern is that further moves against Huawei, a controversial Chinese vendor, will force operators to concentrate their resources on replacing its 4G equipment. The UK has already banned the company and France will reportedly not renew its equipment licenses when they expire.

Investors do not look sold on the plans. Vodafone’s share price closed at about 1.46 on the day they were first announced about a year ago. Today, in early-morning London trading, they fell nearly 5%, to about 1.23.

Concerns about coronavirus, a Huawei swap-out and other parts of the Vodafone empire might have had something to do with that, but the contrast with Cellnex is stark.