Another telecom operator is getting out of the data center business. This time it’s Canada’s BCE, which announced it will sell 13 sites to data center giant Equinix for $750 million (C$1 billion).

The sites, spanning 25 BCE data center facilities, are expected to generate roughly $105 million (C$150 million) in annualized revenue by the fourth quarter. Equinix said it would add the 600 customers included with the deal to its global network of operations stretching across 210 data centers in 55 metro areas. 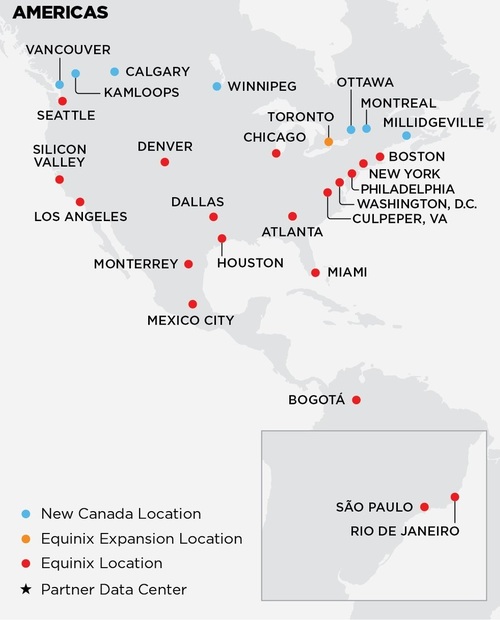 Equinix reported that its data centers cover a wide range of locations in the Americas. Click here for a larger version of this image.
(Source: Equinix)

A BCE sale of its data centers to Equinix also has precedent. For example, Verizon sold around 29 data centers in 24 sites to Equinix in 2016 for $3.6 billion. Separately, AT&T sold its own data center colocation operations and assets to Brookfield for $1.1 billion in 2019.

However, this trend doesn’t necessarily signal the end of telecom’s interest in data centers and cloud computing. For example, Verizon, AT&T and other big telecom operators have begun working in the edge computing space: Verizon inked an edge computing partnership with Amazon late last year, while AT&T has been working with Microsoft in its growing Azure edge computing operation.