As a leading provider of equipment and services to network operators all over the world, Ericsson is uniquely positioned to measure, project and characterize mobile data traffic. Twice a year the company publishes its Mobility Report, a closely watched barometer of the mobile ecosystem. Highlights from the latest report include robust projections for 5G and cellular IoT connections, with most 5G growth expected in North America and Europe, while the greatest cellular IoT growth is expected in North East Asia. 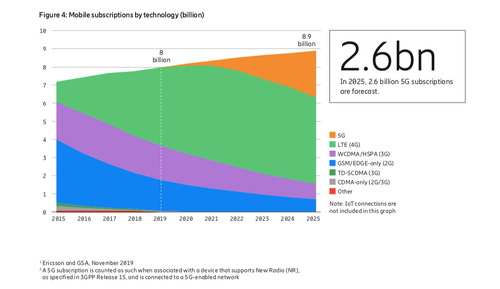 Right now, nascent 5G networks are supporting subscribers in Asia, the US and Europe. According to Ericsson, South Korea has almost 25% of the world’s 5G subscribers (3 million out of 13 million). Ericsson predicts that China will add 5G subscribers rapidly in the year ahead.

Within the first half of 2020, Ericsson expects to see the launch of smartphones that will support 5G in almost every spectrum band currently under development for the technology, including 2.6GHz, 3.5GHz, 26GHz, 28GHz and 39GHz.

North America is the region in which Ericsson expects to see the strongest uptake of 5G over time. The company expects almost three quarters of mobile subscriptions in North America to be 5G subscriptions by 2025. That’s a much higher percentage than any other region. (Western Europe is next with a projected 55%.) 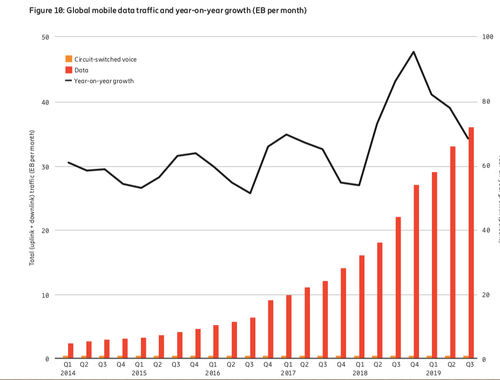 By 2025, 5G networks will be carrying 45% of the world’s mobile data traffic, Ericsson said. That forecast does not include traffic generated by 5G fixed wireless access points, which Ericsson said it cannot currently measure.

Internet of Things
2G and 3G still enable the majority of IoT connections, but Ericsson said that during 2019 “massive” IoT connections like NB-IoT and Cat-M1 grew an estimated 200% to almost 100 million. Ericsson sees NB-IoT and Cat-M1 as complementary rather than competitive technologies in some cases, noting that of the 114 service providers identified as having launched at least one of those technologies, close to a quarter have launched both.

Massive IoT, broadband IoT and critical IoT are the three categories that Ericsson defines for the Internet of Things. The vendor said LTE networks can support the first two but critical IoT will require the ultra-reliable low-latency communication promised by 5G.