Anyone would have thought Ericsson CEO Brje Ekholm had just returned from honeymoon. Never have so many analysts prefaced queries with congratulations after a company’s quarterly results showed a fall in like-for-like sales and profits. But those dips can be easily forgiven in the new normal of pandemic. Fearing worse results and a gloomier outlook, cheery investors had sent Ericsson’s share price up 4.8% in Stockholm by the end of the day.

It’s still a tenth lower than it was this time last year, but many firms have experienced much bigger tumbles. The optimism that surrounds the Swedish maker of mobile networks may be justified. It entered this pandemic in its fittest shape for years and looks well prepared for the pain that lockdowns could inflict.

On the demand side, the danger always seemed to be that customers would reduce investments as their own sales came under pressure. Fredrik Jejdling, Ericsson’s head of networks, acknowledges that most growth in data traffic has occurred on fixed-line networks during the pandemic. To a mobile-only vendor like Ericsson, the risk is that operators shift spending into fiber optics.

That remains a possibility in developed broadband markets such as Europe, where delays to 5G auctions and deployment activity could also hurt Ericsson. Elsewhere, there are good reasons to be hopeful. In China, which is pressing ahead with plans to install half a million 5G basestations by year end, Ericsson has just landed an 11.5% share of a $5.6 billion 5G tender issued by China Mobile, the country’s biggest operator. “It’s a little bit more than we used to have,” says Jejdling, after Ekholm previously estimated Ericsson’s market share in China at about 10%.

The US could also be a relative bright spot now that T-Mobile and Sprint have finally sealed their long-awaited merger. Uncertainty around that deal held up investment activity last year. Now the companies have combined, they will not want to fall behind rival operators AT&T and Verizon on 5G rollout. And China could have yet another boost in store for Ericsson. “There is still the Unicom and Telecom deal to be finalized,” says Jejdling in reference to imminent 5G contract announcements by China’s other telcos.

The bigger worry is about the supply side amid COVID-19 restrictions on people, movements and travel. Jejdling flags some constraints in Malaysia, for instance, “where packaging happens in a lot of manufacturing plants for semiconductors.” Continued and lengthy lockdowns could make the delivery of some components much harder for Ericsson. Even if demand holds up, this disruption could hurt sales in the second half.

But mitigating steps have already helped. Partly for geopolitical reasons, Ericsson is trying to shift production closer to customers. It has already opened a new and heavily automated facility in Texas that will cater to all North American demand in the future. Amid trade tension between the US and China, it has also amassed inventory. “We have built up bigger buffer stocks in the last two years due to the geopolitical uncertainty that we saw happening,” Ekholm told analysts on a call this morning. “We believe we can fulfill supply during the second half of the year because we have put ourselves in that position.” 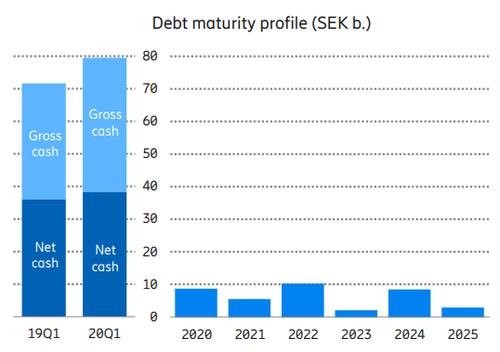 A pandemic that lasts months would put the supply chain under severe stress, he said. But Ericsson’s balance sheet would help it to withstand that sort of pressure for longer than many other firms. Ericsson held net cash of 38.4 billion Swedish kronor ($3.8 billion) at the end of March, and it can easily pay off debts as they mature in the next few years.

None of this makes Ericsson immune to COVID-19. The worst-case scenario would be a severe downturn that triggered spending cuts by its biggest customers. As stocks are depleted, concern about supply chain constraints will also grow. But for the time being, the turnaround efforts of the last two years have given Ericsson some degree of protection.