Facebook looks to AR to build beyond ads | Light Reading

Facebook’s third-quarter revenue, consisting chiefly of advertisement sales, rose 22% to $21.47 billion, ahead of analysts’ expectations of 12%. To put this in perspective, its advertising revenue, making up 98.7% of its overall revenue, was $21.2 billion. 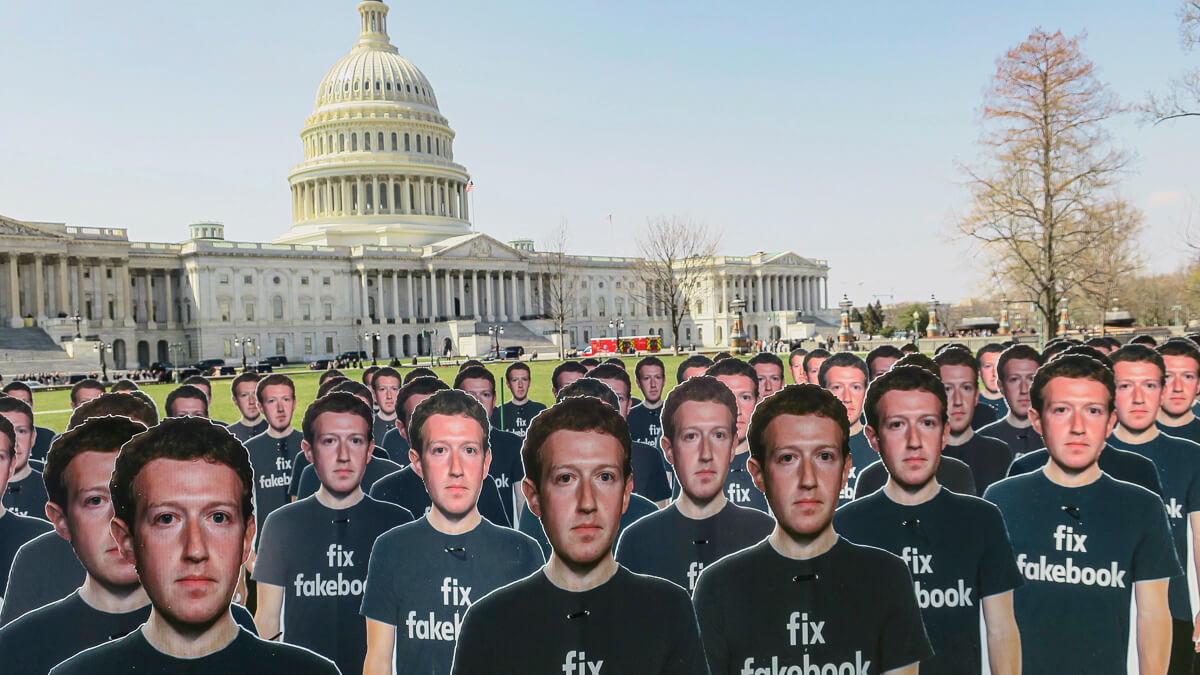 You’ve been zucked: Cutouts of Mark Zuckerberg protest in Washington DC ahead of his appearance before the US Senate. (Source: Joe Flood on Flickr CC2.0)

Facebook remains the second-biggest seller of online advertising after Google. No wonder, given its audience is massive.

The chief executive of the world’s biggest social media company says 2.5 billion people around the world use one of Facebook’s apps daily, with 10 million active advertisers trying to catch their eye.

Many are small businesses, which “otherwise would have had a much harder time and reaching customers during this pandemic, and that’s something that I’m really proud of,” Zuckerberg says on a conference call.

Lashing out on advertisements

And highly targeted advertisements, of the sort which have in the past attracted the company both criticism and a 500,000 fine in 2019 from the UK Information Commissioner’s Office, also let small businesses target customer hotspots, says chief operating officer Sheryl Sandberg.

Glamnetic, a beauty brand which makes magnetic eyelashes, began in a one-bedroom apartment in Los Angeles a year ago, mentions Sandberg.

Personalized advertisements helped Ann McFerran and Kevin Gould, Galmnetic’s owners, identify they should be focusing on women from 18 to 50 in California, New York, Texas, Ohio and several southern states.

McFerran and Gould saw their third-quarter revenue increase ninefold from 2019 to 2020, and their employees grow to 35 from five. For these small businesses, it’s easy to see how the sort of targeting advertisement Facebook offers can be an antidote to Coronavirus.

Next week’s US elections have the potential to be a lightning rod of criticism to Facebook. For this reason, Sandberg was keen to stress “combined political ads and government spending altogether, was still low single-digit percentages of [Facebook’s] ad revenue in the US and globally.”

Advertising is doing well for Facebook, but 98.7% of revenues still is putting a few eggs in one basket. Its third-quarter expenses grew 28% to $13.43 billion, as it tries to build up some non-advertising revenue, too. Augmented reality figures high here in Zuckerberg’s plans.

Smart glasses, made together with Ray-Ban maker Luxottica, will launch next year.

“One day, you’re going to be able to sit down for dinner and your parents, even if they’re on the other side of the country,” he says.

Mr Zuckerberg calls this “the Holy Grail,” delivering a sense of presence while not taking you away from the physical world. And it will have its challenges, he says: fitting in all the technology into “kind of a normal, maybe thick-rimmed consumer glasses form factor.”

Facebook is looking ahead to a future when it matures as a social network, and its advertising numbers have less rocket-like growth.

This future may even be as soon as next quarter, when it expects user numbers to be either flat or slightly down. So it is parking its next hopes in augmented and virtual realitya field where in 2013 it bought Oculus for $2.3 billion, and in 2015 it partnered with Samsung to develop a Samsung Gear virtual reality for the Galaxy smartphones.

Go out and paint the data center green

Combine that with Facebook’s holdings in social networks and the cloud, and you get, among other things, the potential to do interesting things in on-demand game streaming. Which is probably why it launched an on-demand, free game streaming service for Android users this week.

Targeting casual gamers, the sort who once played Farmville and Mafia Wars and not much else since, could work for Facebook, since it is substantially different from Microsoft and Google’s approach to on-demand game streaming.

It is “targeting a completely different market segment–one that seems certain to be much more receptive to cloud streaming games, not least because it’s one that doesn’t know or care what cloud streaming actually is,” says games journalist Rob Fahey.

Facebook will be building its 17th data center, in Gallatin, Tennessee, which will be “100% supported by renewable energy”, says Dave Wehner, Facebook’s chief financial officer.

The data center northeast of Nashville, which costs $800 million and will take three years to build, is part of $3.9 billion in capital expenditures which will include new servers and network infrastructure.

It forms part of Facebook’s “new goal to reach net-zero carbon emissions for our value chain in 2030,” Mr Wehner says.