The typical European telco used to moan about US Internet companies enjoying a free ride on its network, as if college kids had hijacked the local rollercoaster.

These days their big concern is about the Chinese contractors building the ride. In the meantime, the college kids have been handed the keys. 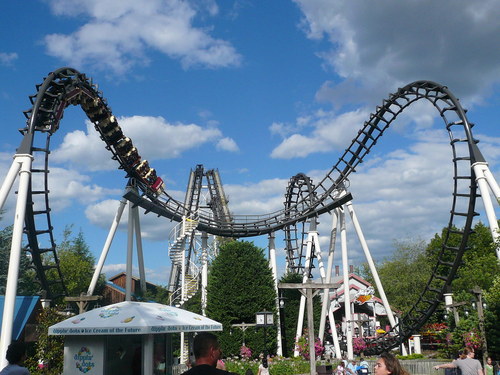 The telco rollercoaster: More fun for passengers than operators?

Google hopped into Orange’s property this week, having already taken up permanent residence in several other major European networks.

Service providers might once have worried about such a cozy relationship with an Internet giant. Now Orange and others seem in desperate need of the digital expertise.

Google gets to flog that, along with various cloud services. It also gets access to Orange’s edge.

The edge, for the avoidance of doubt, is any of the hallowed property that could reduce the distance between the physical hosting of an application and the customers who use it.

Internet giants have traditionally functioned through large data centers that might be hundreds of miles away from the user. This creates a lag that could spoil the experience for a dedicated gamer and rule out more “latency-sensitive” 5G applications, including fabled virtual and augmented reality services.

Telcos, fortunately, have an abundance of smaller facilities like central offices, liberally scattered around a country. Some are being repurposed as edge data centers.

Everyone’s a winner?
Upbeat commentators will insist this latest tie-up is a “win-win” for both parties.

Orange Business Services, the business-to-business part of the telco, rounds out its “multicloud” portfolio with the addition of Google Cloud. In future, new applications developed by Google could stimulate demand for edge computing and expand the 5G amusement park.

Moreover, as COVID-19 transforms society, Orange must transform with it. Taking advantage of Google’s expertise in artificial intelligence (AI), it now plans to build a new analytics and machine-learning system based entirely on Google technologies.

How this will be used is unclear. But as physical stores close forever, it might conceivably provide insights into consumer behavior that could support an online sales strategy.

Not everyone will look so favorably on these arrangements.

Back in the days of 2G, operators believed 3G would put them in charge of the mobile data experience and open a wellspring of new revenues. When 4G eventually cleaned up 3G’s mess, other companies unheard of in the late 1990s ended up as the overlords of the mobile Internet.

History may now seem about to repeat itself. The only difference with 5G and the edge is that some telcos have already abandoned the fight.

Along with other telcos entering into similar arrangements, Orange could be accused of settling for a connectivity role while Google bags anything sexier and more lucrative.

The telco, essentially, maintains the ride and makes sure the wheels are greased. The whizz-kids at Google design the bends and drops that have customers whooping for more.

Mind the gap
Details of the revenue split on customer projects were not provided in today’s announcement, and they probably never will be. But the performance gap between Google Cloud and Orange’s cloud business is already vast.

Last year, sales at Google Cloud rose 53%, to $8.9 billion, and the company maintained that rate in the first three months of 2020.

Orange booked just a 19% increase in cloud revenues last year. While it does not break these out from the IT business total, that unit recorded 6.5% growth, to about 2.9 billion ($3.4 billion). 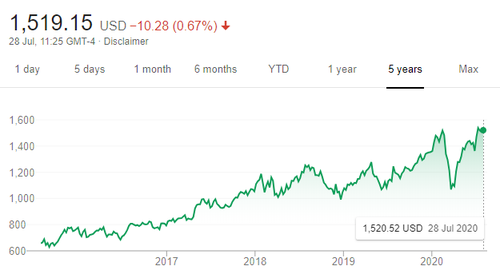 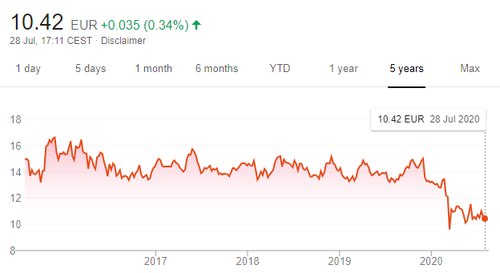 Alphabet, Google’s parent, is today worth more than $1 trillion, its share price having soared 140% in the last five years. Orange stock has fallen about 37% over the same period. The French operator was valued at about 27.5 billion ($32.2 billion) in Paris earlier today.

The latest partnership between the two companies is unlikely to elevate Orange or slow down Google. The gap between them seems bound to continue widening.

The latest deal with Orange fills the France-sized hole in Western Europe. And it all seems to have come at minimal expense, leaving operators with the main tab for 5G networks and edge data centers.

Nor does the Internet giant have to worry too much about China’s Huawei, currently the biggest 5G equipment vendor in Europe. Increasingly unwelcome as regional sentiment turns against China, Huawei is a problem for network partners, not Google.

The European watchdogs that pay attention to US Internet firms should probably be asking questions about Google’s edge expansion, but they are too preoccupied with search engine dominance and GDPR.

Made by Google
Like a kind of digital deity, Google may now start to remake some of Europe’s biggest operators in its own image.

A component of the various deals is training or the transfer of know-how, equipping telco staff with the skills they need for the COVID-19 age. Several thousand Orange employees are to receive training from Google at a new “Center of Excellence” in France.

In other words, employees at several of Europe’s national telecom incumbents are to learn about AI and big data from a massive US firm whose Internet dominance owes much to the same AI and big data tools.

As operators turn Google-savvy, automation will become easier, along with shrinking the workforce.

Staff numbers have fallen 6% at Orange, 16% at Telecom Italia, 15% at Vodafone and 15% at Telefnica since 2015, partly due to earlier rounds of automation and “digital transformation.”

Through its “Engage 2025” strategic plan, Orange is now targeting another 1 billion ($1.2 billion) in annual cost savings by 2023, compared with 2019. The Google partnership will support the Engage 2025 plan, it said.

Jobs are disappearing partly because network functions and IT systems are moving into the public clouds owned by Amazon, Google and Microsoft.

Last year, UK mobile operator Three said it would cut between 700 and 800 technical jobs, about two-thirds of the total, thanks to a deal with Microsoft Azure.

As part of its own tie-up with Google, Vodafone is shifting all its global data into Google Cloud. Orange may do something similar as it builds its new analytics and machine-learning platform.

For good or ill, the US Internet giants have become an even bigger presence in everyday life since the beginning of the current pandemic.

Google serves up cloud-hosted documents for homebound desk jockeys. Microsoft stands behind the socially distanced videoconference. And Amazon delivers everything from office equipment to groceries.

As they march deeper into networks, their impact on Europe’s telecom sector could turn out to be just as profound.