Nearly half of enterprises surveyed recently by Avant Communications plan on expanding their SD-WAN and MPLS usage this year.

Avant Communications, a master agent for enterprise IT services, has published its 2021 State of Disruption Report, which includes the survey results of 500 US-based enterprise technology professionals in management positions. Ken Presti, VP of analytics for Avant, says the report “measures the rate at which new technologies are displacing older ones” based on the responses of enterprise decision-makers. 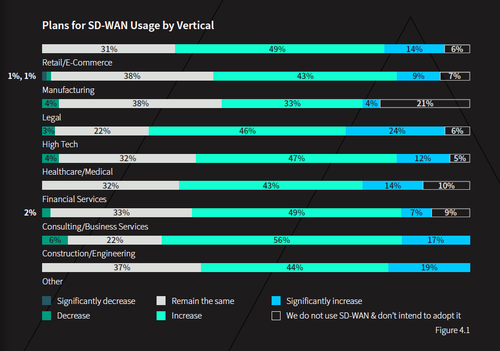 Click here for a larger version of this image.
(Source: Avant Communications)

“There’s a lot more SD-WAN uptake near the edge of the network, whereas MPLS is a lot more well-deployed at the core,” says Presti. “Since [enterprises] still have their investments out there, they’re still spending money on maintaining their MPLS and even growing it out. The same companies that are doing that with MPLS are tending to move toward SD-WAN for other parts of their network as well.”

Getinge, a global supplier of medical technology products and systems with over 10,000 employees, is one example of an enterprise’s both/and approach to SD-WAN and MPLS. Getinge CIO Ludovic Batal says the company will continue to use MPLS to connect its legacy data centers, which accounts for “only five links out of about 200 links.” However, Getinge has decided to deploy Orange Flexible SD-WAN in much of its network to connect 100 global sites. Batal says Getinge wanted a more flexible network service than MPLS as the company moved forward with its cloud strategy, and was interested in SD-WAN due to cost considerations, the ability to deploy network upgrades faster and the security of SD-WAN.

“Due to our decision to move more to the cloud, to be extremely agile and for flexibility, we wanted to have an SD-WAN in place,” says Batal. “MPLS is a wonderful technology it’s extremely stable once implemented. But it’s not flexible at all.” Expanding or upgrading their MPLS network with local telecoms in countries such as China and India was very expensive and took several months, he says, which is one of the reasons moving to SD-WAN was appealing for cost savings and speed of deployment.

Orange partners with Cisco (Cisco SD-WAN and Cisco Meraki) and Fortinet for managed and co-managed SD-WAN services for its enterprise customers. In addition, Orange has SD-WAN deployed at 14,000 customer sites, and about 5,000 additional sites are currently under deployment.

In addition to SD-WAN and MPLS, Avant’s survey respondents expressed increasing interest in investing in cloud-based as-a-service technologies such as unified communications as a service (UCaaS), contact center as a service (CCaaS) and infrastructure as a service (IaaS).

At the onset of the COVID-19 pandemic, enterprise interest in UCaaS increased by 86% over 2019 Avant calculated interest in UCaaS by “our own internal data through various sales inquiries and what comes in through our SalesForce platform,” explains Presti. These results make sense when considering the sharp increase of remote workers due to COVID-19 pandemic restrictions, adds Presti.

Avant’s full report is available here, which includes forecasts for additional enterprise IT services including colocation, cloud-based applications and cybersecurity.