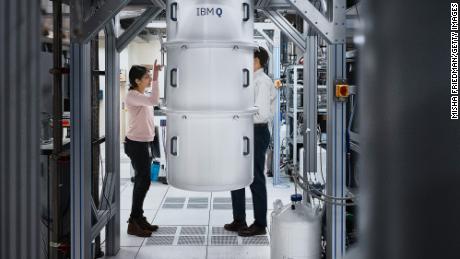 Honeywell (HON) says its quantum computer will be even more powerful than those built by big names such as Google (GOOGL) and IBM (IBM). JPMorgan Chase (JMP) has signed on as Honeywell’s first customer, and the companies will work together to develop quantum computing use cases for the finance business in areas such as fraud detection and artificial intelligence for trading.Quantum computers can process data at a fraction of the speed of normal computers, enabling them to test multiple solutions to a problem at once. Experts say quantum computers could eventually solve complex problems that are a challenge for today’s computers, such as financial options pricing or developing new pharmaceuticals.That potential represents major opportunity for Honeywell, which works in a range of industries from aerospace and defense to oil and gas (it spun off the thermostats two years ago). The company combined technology expertise from its various areas of business — including high vacuum systems and precision control electronics — to develop the computer. Honeywell also invested in two quantum software development firms that will work with the company and its quantum customers.”We wanted to be able to shape how quantum computing gets used,” Tony Uttley, president of Honeywell Quantum Solutions, told CNN Business. “We actually want to be our own best customer in this.” Honeywell is already working on quantum computing solutions for its aerospace and materials development businesses, Uttley said. Quantum also opens up opportunities outside of Honeywell’s expertise, such as its partnership with JPMorgan. The company plans to lease the computing power of its machine to JPMorgan and other firms, allowing customers to send calculations to be run on the quantum computer via Microsoft (MSFT)’s Azure cloud platform. It’s unlikely that companies will rely on quantum computers any time soon, but competition in development is fierce. Last year, Google spurred excitement and controversy when it proclaimed “quantum supremacy” with a machine that it said could solve a calculation in seconds that would take a traditional computer thousands of years, a claim IBM pushed back on. Honeywell says its machine will even be more powerful than its competitors’ because it uses a different method, called “trapped ion” quantum computing. This method makes the machine more accurate, among other benefits, giving it a higher “quantum volume,” a unit used to measure a quantum computer’s performance and processing capacity. Honeywell’s computer will have a quantum volume of 64, and the company expects that metric will grow tenfold every year. By comparison, IBM recently said one of its computers reached a quantum volume of 32. Google has not shared the metric for its computer. “For Honeywell, this has never been a science project,” Uttley said. “We believe in it because our businesses are going to be impacted by it.”