5G, the Internet of Things, foldable phones, Catalan separatist activists, the Huawei issue — the hot topic at Mobile World Congress (MWC), telecom’s annual jamboree in Barcelona, is usually taken from that list. But in the run-up to this year’s show, the chatter has been about something quite different: coronavirus, a deadly illness that is set to hit attendance and hurt the exhibitors who collectively pay millions of dollars to advertise their goods.

Originating in China, the respiratory disease has so far claimed more than 400 lives and infected around 20,000 people, according to a BBC news story on February 4. Parts of China are in lockdown, while dozens of countries and airlines have introduced travel restrictions. Australia, the US and Singapore are now denying entry to any foreigners who have recently visited China, according to mainstream press reports.

The situation is a massive worry for the GSM Association, the mobile industry trade body that organizes and derives most of its income from the show. Last year, more than 109,000 people from 198 countries poured into Barcelona in late February to attend MWC. While a breakdown by country is unavailable, at least several thousand will have come from China: Huawei and ZTE, the country’s homegrown vendors, are among the world’s biggest equipment companies, together employing about quarter of a million people. China Mobile, the world’s largest service provider, has another 460,000 on its payroll. Huawei’s exhibition “stand,” a word that does no justice to the expansive real estate it covers, is usually thronged with executives. 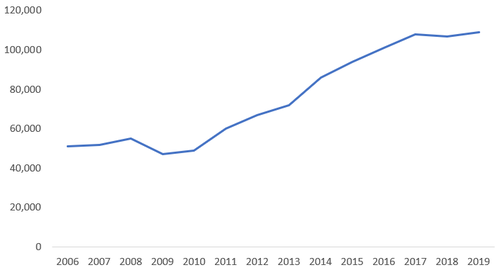 That crowds will be thinner this year is a near certainty. Travel is already prohibited for millions of people in China, and the city restrictions are spreading toward Shanghai, where some of the biggest firms maintain offices. Outside China, a small percentage of nervous jetsetters will probably avoid any international travel until coronavirus is under control. The only uncertainty is whether the outbreak leads to a marked fall in visitors after a decade of growth, with attendee numbers rising from just 47,000 in 2009 to last year’s figure of 109,000.

However, one prominent, non-Chinese exhibitor has now cancelled its involvement in the show. South Korea’s LG Electronics, which makes smartphones and other consumer gadgets, said it would no longer exhibit at MWC or participate in the event due to coronavirus concerns. “This decision removes the risk of exposing hundreds of LG employees to international travel, which has already become more restrictive as the virus continues to spread across borders,” it said in a statement.

The extent of ZTE’s involvement is also now in doubt. After it was reported to have cancelled its usual press conference at the show, the Chinese vendor issued a statement insisting it would participate in the event as planned. But none of its booth staff this year will be from China, it said. In an attempt to allay concern about spreading the disease, ZTE also said it would not allow employees from mainland China to travel if they show any symptoms two weeks before departure. Staff, it insisted, will have to undergo a two-week period of self-isolation — a move that would affect operations if it were actually implemented.

In the face of this adversity, the GSMA remains outwardly calm. In its last statement, issued on February 4, it said there had been “minimal impact on the event thus far” and that MWC would “proceed as planned.” Its mitigation efforts include investments in additional hygiene facilities and “increased onsite medical support.” It has also now suggested that attendees adopt a “no-handshake policy,” as if this will contain the spread of an airborne disease once it shows up in Barcelona. Before that update, the GSMA told Light Reading it was anticipating similar attendee numbers to those seen last year. “There have been no registration impacts on MWC Barcelona thus far,” said a spokesperson for the group.

But the situation is clearly outside the GSMA’s control. If the disease continues to spread, curfews could be extended to China’s biggest cities, preventing telecom executives from traveling to the show regardless of their registration status. In the worst-case scenario, Spanish authorities could mimic the US and deny entry to visitors coming from China. At the time of publication, Spain’s foreign office had not responded to a question about the possibility of travel restrictions.

The Spanish government will be desperate to avoid such measures if at all possible. MWC generates millions for Catalonia’s economy, reliably filling out hotels, guesthouses, bars and restaurants for several days each year. Restrictions could meet with a backlash from China, which reportedly accused the US of inciting “fear” by denying entry to Chinese travelers. Far worse for the Spanish government would be a Catalonian outbreak of coronavirus emanating from MWC. Any democratically elected government seen to have put the economy and foreign relations before public wellbeing could be short-lived, especially if coronavirus spread into other parts of Spain.

Like most of the infected, MWC will eventually recover. Even the withdrawal of other major exhibitors and a sharp fall in attendee numbers would not upset the long-term prospects of a show that remains the focal point of the year for many people in the telecoms industry. Unfortunately, its scale and success have made it uniquely vulnerable to a globetrotting disease. And for the exhibitors that paid the GSMA’s lofty prices, the sight of diminished crowds and vacant stands will be as hard to stomach as a day-old plate of paella.