How rising broadband demands might reshape US telecom | Light Reading

As office workers, students and others continue to seek shelter at home from COVID-19, demand for speedy and reliable Internet service appears to be at an all-time high. That demand is beginning to have serious effects on the nation’s telecommunications providers.

Customers are flocking to fixed broadband providers like Comcast and Charter in unprecedented numbers, forcing some financial analysts to recalibrate their expectations for the space. Some investment firms are warning that the value of broadband assets, particularly in rural areas, are going to remain sky-high “for the foreseeable future.”

Some big names in the telecom space including AT&T, Windstream, Verizon Frontier and Consolidated Communications are promising to ramp up their spending on fiber networks and expand their offerings to keep pace with the new coronavirus reality.

“Over the past few weeks, we’ve seen announcements from telcos, both large and small, about their ambitions to deploy meaningfully more fiber into their footprints,” wrote the financial analysts at Wells Fargo in a recent note to investors. The firm said that fiber and installation vendors “should particularly benefit from this renewed enthusiasm around fiber-to-the-home as we appear set for a multiyear investment cycle by multiple operators.”

Capgemini recently surveyed 6,300 US consumers and found that almost half (48%) felt their Internet connections didn’t meet their needs. The firm also found that customers are increasingly looking at their connection’s flexibility and network speeds, rather than just the reliability and price.

And according to the financial analysts at New Street Research, this demand is pushing a growing number of US households to seek more reliable wired Internet connections.

“Fixed broadband industry growth accelerated to the highest rate since 1Q15,” the analysts wrote in a note to investors late last month. “We believe the growth came largely from wireless-only households adopting fixed broadband to cope with the higher data consumption during the pandemic.”

As a result, the analysts raised their forecasts for providers in the space. They said they continue to expect roughly 5% of US consumers to eschew fixed broadband in favor of cell phones. The penetration of fixed broadband services among consumers will rise to around 86% in 2025, up from the firm’s previous expectations of around 84.4%. 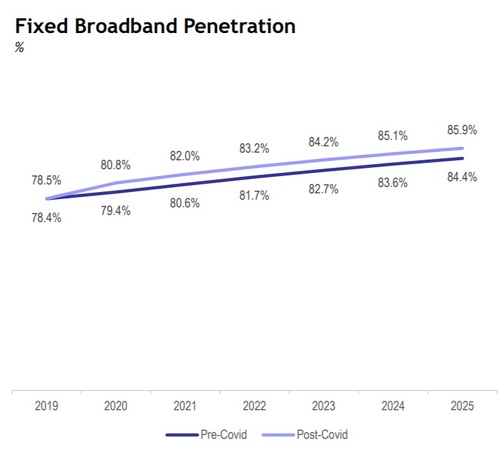 This view certainly dovetails with recent comments from Comcast officials, who now expect to report the addition of around 500,000 new broadband customers in the company’s coming quarter, surpassing Comcast’s previous quarterly record of 492,000 new customer additions in the first quarter of 2008.

According to a recently published report from Dell’Oro Group, which carefully tracks spending in the telecommunications industry, the economic upheaval sparked by the pandemic hasn’t stretched into operators’ network investments. The firm said that global telecom capital expenditures the sum of wireless and wireline telecom investments has so far recorded “stable growth” throughout 2019 and 2020.

“We are still operating in unchartered territories but at this point, it appears that the market sentiment for infrastructure investments is improving and the nadir is now in the past,” said analyst Stefan Pongratz in a statement.

Importantly, this investment activity may stretch into the coming years, based on new statements from telcos like AT&T and Frontier. As noted by Jennifer Fritzsche, a longtime telecom industry analyst, many telecom providers are now “dusting themselves off and taking a very front-footed approach to fiber.”

She pointed to new announcements and statements by Windstream, Frontier, Consolidated Communications and AT&T that indicate the companies generally plan to expand their fiber network footprints.

For AT&T specifically, the company’s CEO John Stankey recently hinted that a key priority for the company will be to do “anything that we can do to put more fiber out into the network.” And AT&T’s networking chief Jeff McElfresh recently told CNBC that the company plans to expand to “a significantly larger number of fiber-passed homes.”

The analysts at New Street speculate that part of the drive toward broadband networks may be because COVID-19 is slowing Americans’ travel, forcing them to stay at home and that they’re no longer content with their mobile phone as their primary connection.

“Average usage on fixed broadband has risen sharply during the pandemic,” they wrote. “Usage across both fixed and wireless networks had been rising at 30-40% per year before the pandemic. Fixed networks saw a sharp spike in usage at the beginning of the pandemic which has modestly subsided. Wireless networks have seen usage growth of nearly 30% since the start of the pandemic, double the historical rate. This suggests that many users may have run into usage caps, driving them to switch to a fixed provider.”

So what does this mean for providers? Economist Jeff Johnston at CoBank Knowledge Exchange, a unit of rural broadband lender CoBank, speculated in a recent report that the value of fiber networks and fiber providers particularly in rural areas won’t shrink anytime soon.

“Valuations for broadband assets have remained elevated over the last 12 months, thanks in large part to infrastructure funds’ insatiable demand for telecom assets,” Johnston wrote. “Because these and other investors need to put a large amount of money to work, we don’t see valuations coming down anytime soon. For fiber-rich operators, we believe EBITDA [earnings before interest, taxes, depreciation, and amortization] multiples in the upper teens, and in some cases even higher, will be the price range that investors and operators can expect for the foreseeable future.”

Continued Johnston: “Of course, no two deals are the same, so factors such as edge out opportunities, competitive environment, customer profiles, and federal grant commitments all impact the price an investor is willing to pay.”

Nonetheless, Johnston’s conclusions are clear: A pandemic with no signs of slowing also appears to be increasingly driving new customers toward Internet providers. And those providers are responding with network expansions as a result.