HPE swooped into the SD-WAN market this week, scooping up SD-WAN supplier Silver Peak for a cool $925 million.

Silver Peak has consistently ranked as the number two SD-WAN supplier in Frost & Sullivan’s analysis of the SD-WAN vendor market, so this acquisition isn’t too surprising, says Roopa Honnachari, industry director at Frost & Sullivan. Silver Peak will be a strong, complementary addition to HPE’s Aruba service, which is an edge services platform, adds Honnachari. The acquisition of Silver Peakwill also strengthen HPE’s suite of networking and edge computing services, she says.

“I think it’s a great fit,” says Honnachari. “Looking at the kind of networking products HPE offers and Aruba this is a great addition to what they have HPE owns all these products which can now become managed with the SD-WAN solution and makes the edge offer much stronger.” The addition of Silver Peak to HPE’s Aruba will assist enterprises in their edge-to-cloud transformations the ease of which they can access cloud applications, support remote workers, and put data closer to the user.

The Silver Peak difference
HPE’s Aruba service has done “very well” in targeting the local area network (LAN) by integrating wireless and wireline services, says Erin Dunne, director of Research Services for Vertical Systems Group. Adding Silver Peak to strengthen its position in the WAN should be beneficial to its enterprise customers, in addition to enterprises and service providers that are already partnering with Silver Peak, she explains.

Silver Peak has both a strong corner of the DIY SD-WAN market, selling directly to enterprises through channel partners and system integrators, in addition to a number of partnerships with service providers that deliver SD-WAN as a managed service to enterprises, adds Dunne.

In October, Silver Peak celebrated its 15-year anniversary and its 1,500th SD-WAN customer, and said it was aiming to boost sales through managed service providers from about 20% to half of its total sales. Existing service provider partners include AT&T, NTT, GTT, Verizon, China Telecom, Masergy and TPx.

While many service providers have already selected an initial SD-WAN supplier to partner with to deliver SD-WAN as a managed service to enterprise customers, Dunne says SPs are now adding additional vendors to their portfolios to diversify their offerings and meet customer demand for specific suppliers. While HPE may be fashionably late to the party, there’s still a seat at the SD-WAN table.

“If you’re an existing HPE customer, all of a sudden this is an excellent portfolio and addition for SD-WAN,” says Dunne. “And, it doesn’t have to be carrier-managed because Silver Peak is really good at the DIY or enterprise model and that’s one of HPE’s strengths, too. So this could be a very strong competitor in this market.”

Omdia ranked Silver Peak fifth for worldwide SD-WAN revenue market share in Q4 2019, with 7.7% of market share. Versa Networks ranked close behind Silver Peak with 7.5% market share. As one of the original top independent SD-WAN providers yet to be swallowed by a bigger fish, Versa will be one to keep an eye on for future acquisition announcements. In recent years, Cisco purchased Viptela for SD-WAN, VMware acquired VeloCloud and Palo Alto plans to acquire CloudGenix. 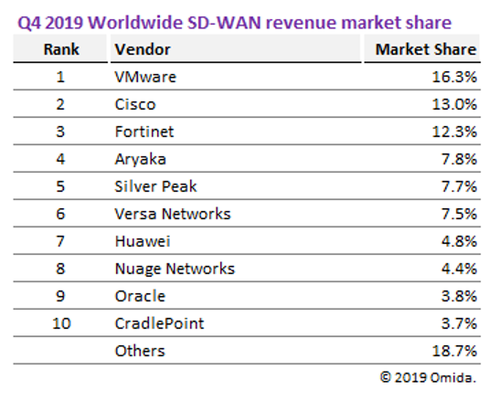 Dell’Oro Group expects the SD-WAN market to take a bit of a hit this year due to the COVID-19 pandemic, but demand is expected to increase in the next few years.

“SD-WAN offers a compelling reason for businesses to upgrade their WAN infrastructures, which is something we haven’t seen in many years,” said Shin Umeda, VP at Dell’Oro Group, in a recent statement. “There is no doubt that COVID-19 has created a major bump in the road, but the fundamental drivers for SD-WAN adoption have not changed, and may even be enhanced if work from home solutions can be incorporated.”