Huawei is running short of friends, but it still has options | Light Reading

18 May Huawei is running short of friends, but it still has options | Light Reading

If Huawei is a plane riddled with bullets the colorful description provided by one of its top executives earlier today then US authorities have just let off the mother of all surface-to-air missiles.

Peeved Huawei has had the temerity to patch holes in its corkscrewing craft, instead of just taking the flak like a “responsible global corporate citizen” (the words of US Commerce Secretary Wilbur Ross), the US government has moved to block the Chinese vendor’s access not only to US technology but to any technology made with US expertise.

It’s a massive difference. The existing rules, applied to their fullest, blocked Huawei’s access to Google Mobile Services, wiping about $10 billion off handset sales in 2019, according to Huawei executives. Other US technology was off limits, too. But under the revisions just announced, any components that rely on US smarts, even if that is only in the manufacturing process, will be unavailable. 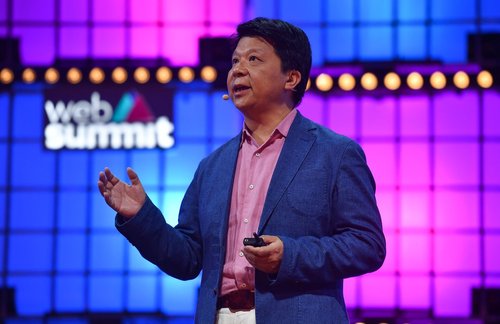 Huawei’s Guo Ping says the Chinese vendor is currently like a plane riddled with bullet holes.

The danger zone for Huawei is TSMC, a Taiwanese foundry whose semiconductors are a vital ingredient in many of Huawei’s products. How vital? Well, Robert Castellano, the president of market research firm The Information Network, reckoned in a recent Seeking Alpha story that Huawei accounts for about 15% of TSMC’s revenues, making it the foundry’s biggest customer after Apple. Last year, 15% would have been about $5.2 billion. Various Huawei 5G chips and server microprocessors rely on TSMC’s technology, which in turn relies on US expertise.

Right now, TSMC does not seem in the mood for resisting the US. According to press reports, it has stopped taking orders from Huawei just days after it announced plans to a build a $12 billion manufacturing plant in Arizona, far away from the surveillance eye of China.

TSMC might not quite fall into the irreplaceable category, but there are few good alternatives. For Huawei, the most obvious is probably SMIC, a Chinese foundry that also produces server chips. Yet SMIC does not have the manufacturing sophistication to support Huawei’s latest designs, said Castellano in his Seeking Alpha story. “Some of Huawei’s newest server processors are being made at 7nm [nanometers],” he wrote. “SMIC does not have 7nm capabilities.”

The loss of TSMC is bad enough, but European customers are also wobbling in their commitment to Huawei. Telia Norway and Denmark’s TDC have already jettisoned the risky firm when selecting 5G vendors. The UK’s BT recently dumped Huawei for Ericsson in its 5G core. This month it also introduced Adtran as a third full-fiber vendor, alongside Huawei and Nokia, as it tries to minimize reliance on Chinese technology in both its fixed and mobile networks. Vodafone is spending 200 million ($217 million) to replace Huawei throughout its European core networks.

Now Deutsche Telekom is bailing out, as well. “We are working toward a Chinese-free core network infrastructure,” said Timotheus Httges, the German operator’s CEO, when asked about Huawei measures during a call on financial results last week.

Even worse, perhaps, is the suggestion that European service providers have resisted exhortations to replace Huawei only because an immediate swap-out would be too costly to bear. That came from Nick Read, Vodafone’s CEO, when he was also quizzed about Huawei earlier this month. European governments now understand “all the arguments of why it’s so important and delicate to handle this over long time horizons,” he said, and will let operators “do it in a moderated way where we balance and develop more diversity of vendors.”

In other words: We’ll find alternatives to Huawei if you give us time.

Meanwhile, Huawei executives can’t make up their mind if the US campaign is futile or fateful. Ren Zhengfei, the company’s founder, regularly plays down the impact during interviews with big titles like the BBC and CNN. Guo Ping, a rotating chairman, is rather more schizophrenic. One minute he is talking about bullet-riddled planes and survival. The next he is saying: “Our business has not been disrupted. Our supply, our cooperation with partners and our customer services have not been disrupted.”

But when a top executive repeatedly mentions customers and thanks them for their support, it usually means he is worried.

No crash landing
Huawei remains a huge firm, though, and one that isn’t about to nose-dive into obliteration as quickly as the US would like. Despite US efforts last year, it still racked up sales of about $123 billion, nearly a fifth more than it made in 2019, as well as about $9 billion in net profit.

Even if it were already excluded from the entirety of Europe, the Middle East and Africa, Huawei would still have made 652.8 billion Chinese yuan ($91.8 billion) in revenues last year. China alone accounts for 60% of its sales.

And therein lies the problem for Western opponents. Try as they might to shoot down the plane, its Chinese business affairs are well out of range. In a market of about 1.4 billion people, whose government-backed operators are lavishing money on 5G rollout, that matters. Having just merged with Sprint, US telco giant T-Mobile US is planning a 5G network based on 85,000 cell sites. China Mobile, the biggest Chinese operator, aims to have 300,000 5G basestations by the end of this year. At the end of March, it already had 32 million 5G customers.

Huawei’s R&D muscle is similarly immense and growing beefier as it tries to become more self-reliant. Last year, it spent about 131.7 billion Chinese yuan ($18.5 billion) on R&D expenses, a 30% increase on the 2019 figure. This year it expects to invest about $20 billion. Combined, Sweden’s Ericsson and Finland’s Nokia spent less than half as much as Huawei did on R&D in 2019.

Neither of the Nordic vendors plays in the handset market these days, though, and neither faces the US squeeze on supply that Huawei does. Even as it pumped more funds into R&D, Huawei jacked up spending on US components last year by 70%, to $18.7 billion. Stockpiling on this scale is usually preceded by an anxiety attack.

But if Huawei’s engines are now stuttering, it probably has a point when it argues the latest US efforts “will only serve to undermine the trust international companies place in US technology and supply chains.”

Many technology executives within European service providers have not been impressed by US aggression. Some Europeans appear just as bothered about US snooping via Cisco or Juniper as they are about Huawei as a conduit for Chinese spies. Parts of the global semiconductor industry are unlikely to be happy about the Trump administration’s latest attack.

“This move may well force the global semiconductor industry to look away from US suppliers of semiconductor design tools and semiconductor production equipment and even to create new rival companies in other countries, including China itself,” said Nelson Dong, a senior partner at US law firm Dorsey & Whitney, in comments emailed to Light Reading.

Dong draws a parallel with developments in the satellite industry after the once-dominant US imposed stricter export controls on the technology. The result then was that many customers sought to bypass these regulations and avoid US suppliers. Eventually, US companies lost billions in sales and ceded market share to international rivals.

“If that recent technology history were to repeat itself into a move to seek EAR-free [Export Administration Regulations-free] semiconductor designs and production equipment, the administration’s direct product rule change could lead to tectonic shifts within the microelectronics industry for decades to come,” said Dong.

Despite what Huawei executives said today about the existential threat, the company’s survival is unlikely to be at stake. For the Chinese, the worst-case scenario is probably that Huawei retreats, shrinks and loses access to some advanced technology while it adapts to the latest US rules.

“The embargo on Huawei hasn’t really slowed them down,” said Earl Lum, an analyst at EJL Wireless Research, during an earlier discussion about the original sanctions program. “You slightly put a bump in their roadmap, but you haven’t stopped them. If the whole point of this was to stop them, it has failed, given the innovation they are coming out with.”

Of course, overcoming this latest US salvo will undoubtedly be much harder, as the Chinese government will be only too aware. “If you start messing with TSMC, whatever trade war is going on right now will escalate substantially,” said Lum when asked previously about the consequences of a TSMC blockade. “I don’t see a positive outcome of that at all.”

In retaliation, the Chinese government could seek to block US access to its domestic market, hurting firms such as Apple, whose iPhone gadgets remain popular in China, and Qualcomm, whose chips power many of the world’s favorite smartphones. Currency devaluation and moves outside the technology sector are other possibilities.

The China-US trade war seems about to shift into an even higher gear.