Ever since Huawei became public enemy number one in the eyes of top US officials, stories have been circulating about its huge technology lead over rivals: Eighteen months is one repeated estimate of its head start over other companies developing 5G products.

This would be a remarkable achievement. Twenty years ago, Huawei was derided as a Chinese copycat ripping off Western products and flogging them at massive discounts. A legal battle between Cisco and Huawei was fought over these allegations. Even many fans saw it mainly as a low-cost alternative to higher-quality Western rivals. Since then, it has supposedly gone from laggard to out-of-sight leader. It is as if a journeyman tennis player became Wimbledon champion in straight sets. And it is just as improbable.

No one unbiased disputes Huawei’s current reputation as one of the world’s most advanced kit makers. In developed markets, replete with demanding consumers and awash with gigabytes, low prices would only get a vendor so far. Several years ago, Huawei overtook Sweden’s Ericsson to become the world’s largest supplier to communications service providers, with a huge European business. It has maintained this market lead, pumping billions into research and development and churning out products that are admired across the industry.

But the suggestion it now has an 18-month technology lead over its 5G rivals has been dismissed by several industry experts who spoke with Light Reading, including an executive from one of Huawei’s service provider customers. While Huawei may have the edge in some important areas, both Ericsson and Nokia can justifiably shout about their achievements in others, said one of the experts. Despite the reports, and even the 5G product setbacks that Nokia has encountered, the sensible view is that all three vendors are on a fairly level footing.

Gripping story
The alternative provides a compelling narrative for both friends and enemies of the Chinese vendor. Its superiority, whether secured fairly or with state support, means the only way is Huawei, the story goes. Unless the US urgently backs other vendors and technologies, Huawei and China will dominate the future 5G economy, say Trump’s lieutenants. Ban or restrict Huawei and customers that rely on its expertise will be left high and dry, comes the rejoinder. Both sides have an interest in perpetuating the claims about an 18-month lead.

Yet those claims do not stand up to scrutiny. The first clue is in 5G’s classification as a “standard” essentially, a technology whose foundations were designed and built by a committee of vendors, rather than a single player. No company could realistically emerge with an unassailable lead from a forum that pools intellectual property in this way. China tried to go it alone in the days of 3G, but its homegrown TD-SCDMA system went down like faulty rocket, even though it was eventually added to the family of 3G technologies. That experience persuaded China that its original, on-the-outside approach was wrong.

What followed was regime change in the international forum, as Huawei displaced other developers of mobile technology. There is no doubt it is a far more influential player today than it ever was in 3G, contributing much of the knowhow that goes into 4G and 5G networks. But no one has been able to prove it is a dominant force in 5G intellectual property. 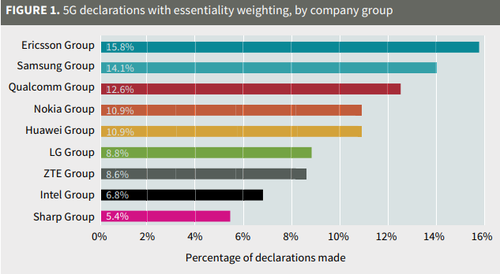 Bird & Bird, a law firm, has carried out what is perhaps the most robust assessment of patents ownership in 5G. Experts at the company looked at various studies that have been used to support claims of Huawei’s technology leadership and concluded that many were “too simplistic.” One issue was a failure to distinguish between a run-of-the-mill patent and one that seriously matters. Another was how to determine if a patent really is “standard-essential.” In Bird & Bird’s white paper, the only two rankings that include an “essentiality” filter or weighting identify Ericsson and Samsung as the top two players, with Huawei placed joint fourth in one and eighth in the other. But the law firm’s broad finding is that none of the studies is conclusive.

Country rankings make a mockery of the Huawei leadership claims, too. In a report published in March 2019, respected consulting firm Arthur D. Little put Australia, South Korea and the US among a small number of 5G leaders, describing most other countries as either followers or laggards. If Huawei is 18 months ahead of its competitors, could three countries that make zero or minimal use of its equipment ever be 5G leaders? “How is it that the two leading 5G markets in the world are the US and South Korea?” asks John Strand, the CEO of advisory group Strand Consult. 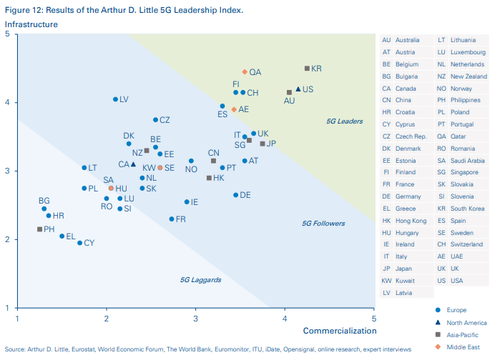 One of Huawei’s major European customers also takes issue with the claims about its 18-month technology lead. Arnaud Vamparys heads up the 5G technical program for Orange, which currently operates networks through Europe, Africa and the Middle East. In selecting 5G suppliers, he wanted diversity without compromising the reputation for network quality Orange established in the 4G era. “We finished with five suppliers able to roll out in Europe, namely Ericsson, Huawei, Nokia, Samsung and ZTE,” Vamparys tells Light Reading. “I don’t see this 18 months. Of course, you have positive and negative things in our benchmarks, but it is not so black and white.”

Research muscle
Awestruck and Huawei-fearing observers have regularly drawn attention to the imbalance in research and development (R&D) spending between the Chinese vendor and its competitors. Last year alone, Huawei pumped a massive $18 billion into R&D, according to Ryan Ding, the CEO of its carrier business. Nokia’s budget was just $4.8 billion, while Ericsson managed only $4 billion. Yet this comparison of headline amounts overlooks the huge differences between the three companies. “Ericsson is pure mobile and Nokia is mainly mobile plus some other things,” says Strand. “Huawei’s R&D budget covers chipsets, fixed line, mobile, cable TV solutions, AI solutions, data centers, mobile phones, laptops and tablets.”

That budget even extends into activities outside its main addressable market, he says. Besides making telecom equipment, Huawei has also been a significant player in the solar energy business, according to Strand. Indeed, in June last year, it was reported by the UK’s Financial Times to have shut down a US solar business that sold inverters, a type of electrical converter. The global significance of this solar business is unclear because Huawei’s most recently published annual report, for 2018, makes only one cursory reference to the products it develops. “There is no transparency in the way they do things,” says Strand. 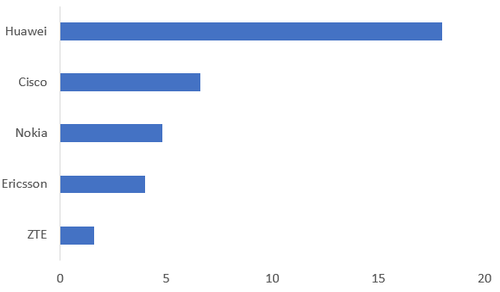 Source: Companies. Notes: Figures are for last fiscal year for which data was available.

Nor do the headline figures prove that Huawei allocates funds and spends them more efficiently than its rivals. The firm is understood to have a more scattergun approach than other vendors, a greater willingness (and ability) to support initiatives that might ultimately fail. While this risk-taking might boost the likelihood of breakthroughs, companies with far smaller R&D budgets have remained competitive in the 5G era.

The standout example is perhaps ZTE, another Chinese vendor whose entire R&D spending was less than $1.6 billion in 2018. Despite the gap with its rivals, ZTE increased its share of the overall market for telecom equipment by two percentage points last year, to about 10%, according to market research firm Dell’Oro. In 5G, Orange’s Vamparys holds it in high regard. “It has very good technology and quality, even in standalone mode,” he says. “It is one of our main vendors.”

If Huawei does hold a technology advantage, it probably relates to the breadth of its product portfolio. No other vendor can provide the full spectrum of high-quality network equipment along with consumer gadgets, data center components and even some cable TV products. This makes Huawei a competitive threat in nearly all segments of the market, and a real danger when customers want to buy almost everything from the same vendor. But within specific areas, each of the leading suppliers could boast strengths, according to Stefan Pongratz, an analyst at Dell’Oro. Another analyst for a different organization is in broad agreement. Talk of an 18-month lead is “mainly rubbish,” he says.

None of this would justify banning the Chinese vendor. Arguments about the security of Chinese equipment and illegal activities by Chinese firms are separate matters for consideration. Unfortunately, the spurious claims regarding Huawei’s technology lead are being used to influence that debate one way or the other. Service providers and policymakers are right to worry about competition and supplier diversity, and Huawei must these days be acknowledged as a formidable technology player just not one that has a monopoly on 5G expertise.