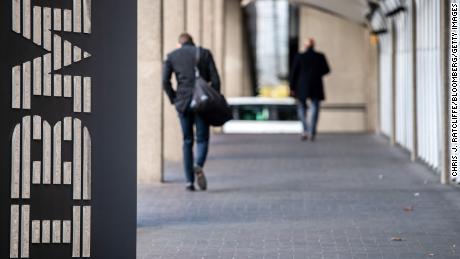 Rometty will be succeeded by Arvind Krishna, who is currently Big Blue’s senior vice president for cloud and cognitive software. Jim Whitehurst, the Red Hat CEO who many thought would take over for Rometty, will become IBM’s president. Both moves take effect on April 6. Rometty will remain executive chairman of IBM until her retirement at the end of the year.Shares of IBM (IBM) were up 5% after hours on the news. Rometty, who is 62, was widely expected to retire soon since previous IBM chiefs had stepped down around the age of 60. Krishna is 57 and Whitehurst is 52. But her departure means that the ranks of women CEOs running large companies will grow even smaller. There were only 33 women CEOs in charge of Fortune 500 firms as of last year, a number that included Rometty. GM’s (GM) Mary Barra, Best Buy’s (BBY) Corie Barry, Lockheed Martin’s (LMT) Marillyn Hewson and Safra Catz of Oracle (ORCL) are some of the other most prominent female CEOs.”Ginni Rometty’s exit from IBM marks the departure of one of the most prestigious female CEOs of the past decade. Even though IBM’s stock performance was more volatile than desired by Wall Street, she left a lasting mark on one of the cornerstone American companies,” said Tim Hubbard, an assistant professor of management at the University of Notre Dame’s Mendoza College of Business and a former IBM consultant.Under Rometty, IBM boosted its presence in the lucrative world of cloud computing, particularly through its landmark $34 billion purchase of Red Hat in 2018. For that reason, many thought Rometty’s eventual successor would be Whitehurst.But Krishna also has expertise in the cloud and is an IBM veteran. He has worked for Big Blue for nearly 30 years in a variety of roles, according to his LinkedIn proflle. IBM said in its press release that Krishna has led the development of several emerging technologies at IBM, including artificial intelligence (think Watson), the cloud, quantum computing and blockchain. “Arvind is the right CEO for the next era at IBM,” Rometty said in a press release. “He is a brilliant technologist who has played a significant role in developing our key technologies.”Rometty also praised Whitehurst in the release, saying that he “has positioned Red Hat as the world’s leading provider of open source enterprise IT software solutions and services.” She concluded by noting that Krishna and Whitehurst are “a proven technical and business-savvy leadership team.”That team faces a challenge, proving to big businesses — and fickle investors — that IBM can be a top provider of cloud services. Krishna said they are up to the task.”IBM has such talented people and technology that we can bring together to help our clients solve their toughest problems,” Krishna said in a statement. “We have great opportunities ahead to help our clients advance the transformation of their business while also remaining the global leader in the trusted stewardship of technology.” IBM’s stock has lagged the rest of the tech sector and the broader market in recent years, partly due to the perception that IBM’s cloud offerings were not as competitive as those from Amazon (AMZN), Microsoft (MSFT), Google owner Alphabet (GOOGL) and Salesforce (CRM).Microsoft and Amazon both posted strong results this week thanks to the success of their Azure and AWS units.But IBM impressed Wall Street earlier this month when it reported earnings and sales that topped forecasts, led by the strength of its cloud business. Krishna and Whitehurst will need to keep the momentum going.