Mavenir is now one of the world’s five largest providers of mobile core network technology, according to research and consulting firm Dell’Oro Group. The core is essentially the “brain” that runs operators’ 4G and 5G networks.

The development is noteworthy considering Mavenir continues to position itself for an eventual initial public offering (IPO), and is working to leverage the open RAN trend to challenge established vendors like Huawei, Nokia and Ericsson.

“Mavenir’s solutions appear to be resonating with service providers at just the right time as service providers look for ways to monetize their networks, to upgrade their networks, and look for alternatives to traditional vendors,” wrote Dell’Oro analyst Dave Bolan in response to questions from Light Reading. “What is attractive about Mavenir is they are a proven player with a full product portfolio, and it is a testament to Mavenir’s credit that much of their growth is coming from their existing customer base as service providers update their technology to cloud-native software and/or 5G.”

Bolan noted Mavenior has enjoyed significant mobile core network wins in Europe, India and Japan. Top operators, including Turkcell, Telefnica and Deutsche Telekom, alongside upstarts like Rakuten Mobile in Japan and Dish Network in the US, have purchased the company’s offerings. 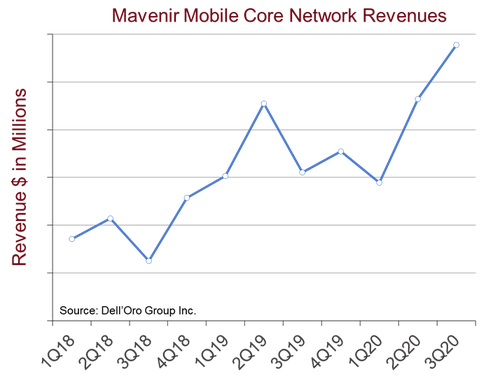 Mavenir’s sales of mobile core network products have been growing over the past few years.
(Source: Dell’Oro)

Dell’Oro declined to provide specific market share numbers, which it retains only for its own customers, but Bolan said Mavenir commands between 5% and 10% of the market. Huawei continues to lead the market for mobile core network products with between 30% and 35% of the market, followed by Ericsson, ZTE and Nokia.

Dell’Oro also noted in a release that 4G core network functions still comprise more than half of the overall mobile core market, but that 5G has emerged as the growth area.

Mavenir has also been polishing its front office in expectation of increased business. For example, the company in recent weeks hired Vishant Vora as its new president of global operations. Vora was previously CTO of Vodafone Idea in India, where he helped guide the company toward its ongoing deployment of Mavenir’s open RAN products.

However, Mavenir has faced some challenges. For example, the top networking executive at Mavenir’s largest customer Neville Ray at T-Mobile spoke out strongly against the overall open RAN trend that Mavenir is hoping to profit from.

“It’s not ready for prime time for us,” Ray said about open RAN. “I’m not going to go and chase a bunch of capital efficiencies which I’m not sure exist at this point.”

The open RAN trend which Mavenir and other, smaller vendors are hoping to use to generate growth promises to separate the hardware and software elements in a wireless network. Doing so could break the proprietary locks that large vendors like Ericsson and Huawei have on various network components, thus allowing operators to mix and match open RAN products from a variety of vendors.