Microsoft this week announced significant quarterly gains across all of its businesses, but hidden amid the company’s results were clearer details about its strategy for edge computing, 5G and private wireless networking.

“We are the only cloud that extends to the edge, with consistency across operating models, development environments and infrastructure stack,” boasted Microsoft chief Satya Nadella during the company’s quarterly conference call with analysts, according to a Seeking Alpha transcript of his remarks. “Now Azure Edge Zones extends Azure to the network edge, connecting directly with the carriers’ 5G network to enable immersive real-time experiences that require ultra-low latency. And our acquisition of Affirmed Networks will help operators deploy and maintain 5G networks and services cost effectively and securely.”

When questioned about Microsoft’s overall Azure cloud computing strategy amid worldwide stay- and work-at-home orders, Nadella explained that the company is working to keep pace with demand for its online services.

And he said that Microsoft’s move to edge computing would aid in that effort.

“We believe that over the next several years, the cloud is going to get closer to the edge. We’re already seeing this trend from the major hyperscalers, and as a result, continue to evaluate the opportunities that might be there for us,” Bartlett explained during his company’s quarterly conference call this week, according to a Seeking Alpha transcript of his remarks. “What will also be interesting is how the hyperscale and cloud service providers will interact and position themselves with the carriers.”

Continued Bartlett: “As a result, we continue to explore trials and partnerships with a variety of different players, including hyperscalers, cloud service providers, carriers, data center companies and equipment suppliers to see just how our infrastructure may plug into this new environment.”

Bartlett pointed to American Tower’s purchase of the Atlanta, Ga.-based ColoATL data center last year as an example of the company’s interest in the space.

Edge ambitions
As Microsoft outlined in a lengthy post on the topic at the end of last month, it is working to make sure its Azure cloud computing service won’t remain cooped up in a few giant data centers around the world. Instead, the company is embracing an edge computing design that will see its Azure services running inside a large number of smaller data centers spread all over the world. In doing so, Microsoft hopes to reduce the latency involved in sending users’ computing requests to far-flung data centers by instead sending them to edge computing data centers that are geographically closer to those users. That ought to make a big difference in services like videoconferencing and online gaming that rely on near-instantaneous connections.

But that’s just the start of Microsoft’s edge computing effort. The company is also working to make sure that its Azure services will work in real time on 5G networks run by both commercial operators like Vodafone and AT&T as well as private companies like robotics maker Attabotics.

Microsoft said that 5G operators that support its Azure Edge Zones will be able to offer 10ms latency.

Microsoft said it will work with enterprise customers that want to build their own private wireless networks. Click here for a larger version of this image.
(Source: Microsoft)

Microsoft explained that private wireless networks running on Azure Private Edge Zones can support a variety of applications such as smart factories or remote surgery. In retail, Microsoft said the solution could support the creation of an appealing advertisement “before a potential customer looks away from a product on-line or in an aisle at the store.”

“Deploying a private mobile network solution on Private Edge Zones requires other components, like mobile access points, SIM cards, and other VNFs like routers,” Microsoft explained. “Access to licensed or unlicensed spectrum is critical to setting up a private mobile network. And you might need help with RF planning, physical layout, installation, and support.”

This is partly where Microsoft’s recent acquisition of Affirmed Networks a transaction reported to be worth $1.35 billion comes in. Affirmed is one of the Virtualized Evolved Packet Core (vEPC) options Microsoft is selling to enterprises that want to build a private wireless LTE or 5G network. Other vEPC vendors on Microsoft’s roster include Mavenir, Nokia, Metaswitch and Expeto.

However, Microsoft has also said it may sell Affirmed’s technology directly to 5G operators that are working to roll out virtualized software architecture in their networks. The company recently confirmed to Light Reading that Affirmed Networks’ CEO, Anand Krishnamurthy, will report to Jason Zander, who leads Microsoft’s Azure Division, and that Microsoft will make no changes to Affirmed’s office locations or staff. The company declined to answer further questions about the acquisition.

Other vendors participating in Microsoft’s Azure Private Edge Zones for enterprise networks include Arista for routers; Palo Alto Networks for firewalls; VMWare, Nokia and NetFoundry for SD-WAN; and CommScope for radio equipment. Importantly, operators ranging from Vodafone to Telstra to Telefonica are among those listed as supporting the effort. 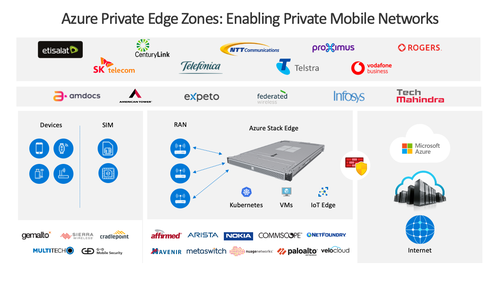 Microsoft has assembled a significant roster of wireless networking companies to support its Azure Private Edge Zones. Click here for a larger version of this image.
(Source: Microsoft)