Posted at 10:33h in by fiberguide 0 Comments

Office 365 — and Google G Suite, and Salesforce and other software-as-a-service applications (SaaS) — are making responsive, secure Internet connectivity essential for enterprises. That’s transforming enterprise networks, as well as the business and technology models for telcos and other service providers that provide that connectivity.

The transition to Office 365 moved business applications from on-premises Exchange servers to the cloud, Ortega said. That generated a great deal of north-south traffic, with challenges to networking scalability and security: Enterprises had to re-architect their networks to accommodate the surge of Internet traffic.

Office 365 presents challenges to the WAN as well: The Microsoft applications perform best when customers get local access to Microsoft’s network, Ortega said. 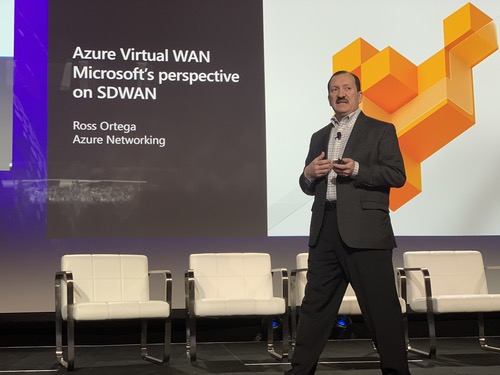 On the other hand, many assets will stay on customer premises, and require cloud connectivity. To that end, Microsoft provides 100Gbit/s access to its network.

Microsoft’s goal is simplifying connectivity. The network should not be in the way of adopting cloud apps. SD-WAN has been proprietary, and Microsoft is pushing hard to standardize. (That’s also a priority for MEF.)

Cloud applications like Office 365 are built to be self-service, available on-demand. Enterprise want those same capabilities from the network, and that’s where service provider partners come into play, Ortega said.

Global reach
Microsoft’s cloud network has a global reach, with 54 regions, each containing multiple data centers; 130,000 miles of fiber and subsea cable; and 160 points of presence and growing. To connect to customers, Microsoft has more than 500 network partners and more than 20,000 peering points.

Over time, networking equipment began to occupy a large amount of Microsoft data center space, which didn’t scale. So Microsoft pushed that equipment out to create regional data centers.

With 1.6 petabit per second metro network traffic, latency and bandwidth aren’t problems on the Microsoft network itself, but the last mile can be problematic for customers, Ortega says. That’s where SD-WAN and complementary WAN technologies can help solve problems.

Different business cases utilize different forms of connectivity to the Microsoft network. Enterprise branch offices use IPSec, while point-to-point devices such as phones use open VPN. Microsoft’s own ExpressRoute WAN provides integration and encryption. The overall goal is to create a network mesh to get traffic into data centers quickly.

Enterprises with hundreds or thousands of branches will find it too difficult to manage IPSec tunnels, so Microsoft partners connect to those tunnels using simple Microsoft APIs. ExpressRoute standardizes partner- and customer-facing APIs.

Additionally, Microsoft recently launched a managed service provider (MSP) program, to provide the full-service handholding that many enterprise customers demand, and that Microsoft doesn’t provide itself. “We find that all around the world there are very few people who know how to run a network,” Ortega said. “That’s the opportunity. That’s what the MSP program is about.”

While Ortega’s presentation started boldly, it ended humbly. Microsoft depends on service provider partners to connect from its services to enterprise customers, he said. Despite its vast global network, Microsoft does not control the last mile. “All Azure revenue and Microsoft cloud revenue is depending on network carriers,” Ortega said.