Posted at 04:33h in by fiberguide 0 Comments

There are many compelling drivers for edge computing today, including new devices and business models coming onto the network, Internet of Things (IoT) and services and applications demanding ultra-low latency. The challenge facing carriers is how to support this highly distributed demand without sinking millions or billions of dollars of capex and opex into yet another generation of infrastructure. Carrier buildout of the edge is predicated on a low-cost flexible platform that can scale to meet demand supporting a collection of use cases that vary widely in terms of bandwidth, latency and session volume.

To gauge how carriers are planning and implementing edge computing, and in collaboration with Schneider Electric, F5 and Wind River, Heavy Reading asked over 90 global telco service providers about their plans for edge computing. In our report, “Edge Computing in Telco Networks: Gaining the Competitive Edge,” Heavy Reading analyzes the choices these service providers are making with their implementation and how these implementations are evolving.

Carriers are leaning on DIY and public cloud

The majority of Heavy Reading’s respondents will tackle the edge with some flavor of DIY deployment either one based on industry standard virtualization and container platforms or one that leverages an assist from their vendor partners, as shown in the figure below. However, the carriers show a willingness to share edge buildout risk with the public cloud providers. These partners, or potential partners, were winners with the greatest percentage of 31% to 50% of implementations and of 51% to 100% implementations. Startups had a respectable showing in providing implementations for a small percentage of a carrier network.

Q: What percentage of your edge implementations will use the following deployment strategies? 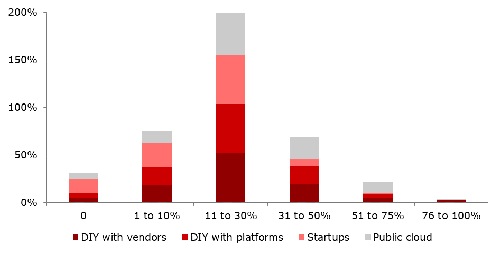 Heavy Reading interviews with carriers show that the more prosaic use cases are driving edge computing implementations today, including use cases such as virtual radio access network (vRAN), video processing/caching and operational efficiencies. Service providers are not waiting for high profile “killer apps” to emerge, but they do note the impact of individual industrial use cases. While IoT is second from last in “very important” responses, it is way out in front in “important” responses. This suggests that carriers consider IoT to be the common foundation for edge computing implementations.

Q: How important are the following use cases in your implementation of edge computing? 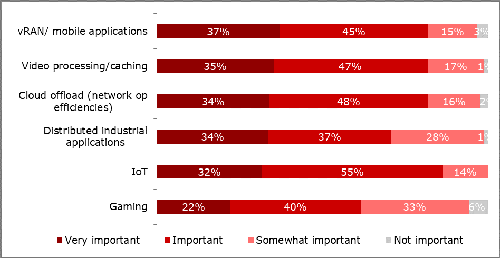 Security dominates, from containers to applications

Throughout Heavy Reading’s carrier survey, security both data en route and security tied to end-user safety topped our list of required intelligent edge features. Respondents need a multilayered response to the growing volume of multivector attacks, as shown in the figure below. Responses to access verification and network firewalls are almost identical, and these will be the first line of defense. Container security has only recently started to make its way into carrier networks with proofs-of-concept. Nevertheless, it grabbed third place in our list of carrier security priorities, underscoring carrier determination to provide a secure environment as they transition to a cloud-native environment. The response to GPRS tunneling protocol (GTP) can be characterized as “of course.”

It is interesting that Layer 7 firewalls show the least amount of exuberance (by comparison only). Layer 7 is a key attack vector today. Cloud-based web application firewalls have been deployed by the telcos not only as part of their security portfolio, but also as part of a security as a service offering for enterprise customers. Today, they are being updated to be used with microservices and in a DevOps CI/CD environment.

Q: How do you prioritize implementation of the following security solutions in the edge? 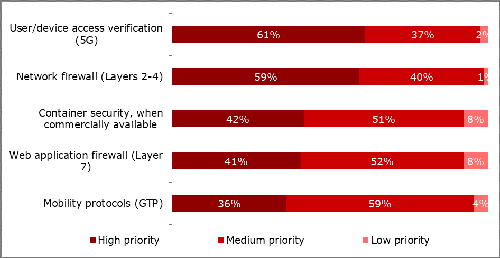 Heavy Reading’s findings are a good indication that telco carriers are poised and ready for the business influx that edge computing will bring. To gain more in-depth details of telco service providers’ perspective on the burgeoning edge market, download and read the full report now.

This blog is sponsored by F5.