Posted at 11:34h in by fiberguide 0 Comments

On a sub-zero but sunny morning in Helsinki, the news from Nokia was a chilly reminder of the difficulties that face the huge Finnish network equipment maker, accompanied by a few glimmers of light.

First, the bad news. Mobile access, the huge unit (soon to be a standalone one) that generates nearly half of company sales, is in for a torrid 2021. Revenues are expected to “decline significantly,” CEO Pekka Lundmark told reporters this morning. Nokia has already backed sheepishly out of China’s vast market for 5G radio access network products. More recently, it appears to have been struggling in North America, too. After South Korea’s Samsung beat it to a major contract with Verizon, it expects to lose share in a more price-competitive US market this year. Nor will mobile deliver a profit. Nokia’s forecast is that it will just break even, at the operating margin level.

That largely explains why Nokia’s latest guidance is for 2021 sales of between 20.6 billion (US$24.7 billion) and 21.8 billion ($26.2 billion), down from about 20.9 billion ($25.1 billion) last year. That represented a drop of 6% (4%, on a constant-currency basis), due mainly to a slump in mobile. In China, where it landed none of the big 5G contracts last year, overall revenues dropped a quarter. 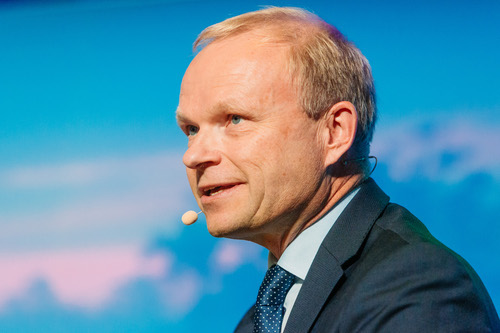 On profitability, Nokia is guiding for an operating margin of between 7% and 10%, a broad range that was announced when Lundmark, now six months into the job, gave his first strategy update last fall. In 2020, after the completion of a 500 million ($600 million) savings program, Nokia managed just 4.2%. And while that was an improvement on the 2.1% it reported for 2019, the guidance for growing profitability on top of shrinking sales suggests further cuts lie ahead.

Lundmark would not be drawn on firm commitments at this stage. “The new operational model is a great opportunity to look for cost efficiencies,” he told Light Reading, in reference to his restructuring of the business. “One of the goals is to identify places where we can improve cost efficiency.” An update is promised at Nokia’s forthcoming capital markets day in March.

By carving out mobile, his restructuring lays bare some of its challenges. Outside China, its share of the 4G and 5G markets last year held steady at 27%. This year it will probably fall to between 25% and 27%, said the company. It is still paying for a costly decision to use programmable (and expensive) 5G components, rather than customized chips. Margins and competitiveness have suffered.

Encouragingly, however, the phase-out of these programmable components is proceeding well. By the end of 2020, nearly 43% of its 5G products used lower-cost chips, beating a company target of 37%. Although Nokia does not expect to complete the transition until late 2022, the gross margin at the networks business has already improved, hitting 34.2% last year, from just 30.6% in 2019. And despite setbacks in China and North America, a backlash against Huawei has translated into mobile gains in the “flattish” European market.

“It is clear there have been deals driven by geopolitical developments and opportunities to swap out competitor equipment,” said Lundmark. “Our market share in Europe is on a positive trend.”

But fortifying mobile will mean pumping additional money into research and development (R&D). Overall R&D expenses fell a sharpish 10% last year, to about 4.1 billion ($4.9 billion), and they have fallen ever since Nokia completed its 15.6 billion ($18.7 billion, at today’s exchange rate) takeover of Alcatel-Lucent in 2016. That looks bad when Ericsson and Huawei, Nokia’s two big rivals, have continued to increase their budgets.

An uptick in the fourth quarter is a positive sign for mobile access, with overall R&D expenses up 7%, to about 1.1 billion ($1.3 billion). On today’s call, Lundmark reiterated a “willingness to sacrifice margins to increase investments in R&D.” At the same time, that increase boosts the likelihood of cuts in other areas of the business. Staff numbers fell by nearly 5,000 in 2019, to an average of 98,322 across the year, and they are likely to have dropped last year, too (Nokia does not state this figure except in its annual reports). Jobs outside R&D will be at risk in 2021.

Most of the good news concerns the rest of Nokia’s business. If mobile sales “decline significantly” this year, but overall revenues are down less dramatically, the implication is that other business areas will perform well. “You actually see that other business areas are quite well compensating for what we are expecting to lose in mobile topline,” said Lundmark, citing growth opportunities in submarine cable, fixed access and enterprise.

While the sales performance of several non-mobile units last year looks underwhelming, the pandemic has clearly been a constraint. Moreover, analysts continue to hold Nokia in high regard for its expertise in IP, optical, fixed access and core network technologies. Its young enterprise business has also been a strength, with full-year sales up 11% (14% on a constant-currency basis), to about 1.6 billion ($1.9 billion).

Geopolitics could also work in Nokia’s favor outside the high-profile 5G market, Lundmark told Light Reading. “There are opportunities in all of the business,” he said. “It is not only in mobile that is the largest part of this, but it is not limited to that.”

He clearly needs shareholders to exercise patience. After reporting a small net profit of 18 million ($21.6 million) in 2019, Nokia racked up a 2.4 billion ($2.9 billion) loss in 2020 due mainly to a large tax bill. Nor does it plan to pay a dividend this year. “We are increasing R&D and talking about headwinds this year,” said Lundmark. “We will come back to our dividend policy at the capital markets day.”

Caught up in unusual short-selling activity last week, Nokia’s share price fell 2% in Helsinki this morning, to about 3.72, as investors took stock. That is much better than a low point of 2.08 last year, during the first wave of lockdowns. Sensible shareholders will appreciate that a juggernaut cannot be turned around in just a few short weeks.