Around 7 million mobile basestations dot the planet, pumping voice and data services to billions of phone customers. Stick a basestation into each of the world’s main industrial sites and that number could easily treble, according to Stephane Daeuble, the head of enterprise solutions marketing for Nokia.

It largely explains why the Finnish equipment maker has become a near-obsessive about the market for so-called private wireless technology localized mobile networks that would support an individual company’s very specific needs. With little to be gained in the public market, the private one is perhaps Nokia’s best bet for growth.

The launch of the company’s first “standalone” 5G service for the private wireless market should help. In the last few years, Nokia has signed up an impressive 180 business customers, providing a major spur to its relatively young Nokia Enterprise division. All but 30, however, have been using pre-5G technology, and the 5G customers will have had to make do with less useful “non-standalone” technology, which piggybacks on the 4G core in the absence of a 5G one. That gap has now been filled. 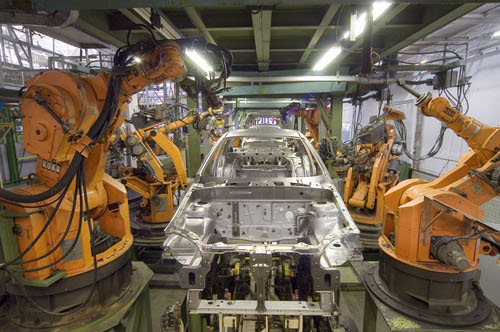 Nokia hopes 5G will figure prominently in automated factories such as the one pictured.

Standalone 5G seems to be a big deal for some customers. While Daeuble reckons Nokia can support around 85% of today’s industrial applications with older technologies, more advanced capabilities will be critical in the future, he says. Car companies, in particular, need to plan ahead. “Unless we can provide 5G technology today, they will not be able to build a factory based on 5G.”

Taking advantage of the standalone technology included in the 3GPP’s Release 15 update (Release 16 has just been standardized), Nokia’s latest offering comes in the same two flavors as its older products. For companies happy to give all the service management over to Nokia or another partner, there is the Digital Automation Cloud, which largely entails the installation of an edge cloud server directly on the customer premises. For the more demanding organization, Nokia provides what it calls Modular Private Wireless. “This one has the full core network deployed on site,” says Daeuble.

That shrinks the role that an operator would previously have played and moves in some countries to award spectrum directly to industrial groups may further diminish the telco’s importance. Although Nokia works alongside operators on some projects, it is eager to serve business customers directly. That strategic choice distinguishes it from Ericsson, one of its chief rivals in this market. Apparently worried about competing against its own customers, the Swedish firm insists on using service providers as channels to market.

If Nokia risks upsetting the service providers that still represent its main audience, Ericsson may be foregoing a big opportunity. Daeuble reckons about 40 to 50 countries have now reserved some frequencies for industrial groups and that some companies “effectively want to take full control and have full management capability.” Those keener on telco involvement tend to be more IT-focused or drawn from the small and midsized enterprise sector, he says.

Moreover, while Nokia’s mainstream 5G business has recently struggled, the enterprise division has continued to perform well, albeit from a small base. In the first quarter (Nokia has yet to publish second-quarter results), its revenues grew 20%, to 311 million (US$356 million), while Nokia’s overall sales declined 2%, to about 4.9 billion ($5.6 billion).

Pablo Tomasi, a principal analyst who covers private networks at Omdia, is encouraged by the Finnish vendor’s recent progress. “Nokia has been regularly updating the market on the number of its private network customers: it had more than 120 customers in November 2019 and it has more than 180 customers today,” he says. “This shows that the market is gaining momentum and Nokia wants to channel this by starting the journey to 5G standalone for private networks, the next big development.”

Importantly, Nokia can flaunt several customers that fit very different profiles. It announced its first standalone 5G deal today, revealing that Sandvik, a Swedish mining company that already uses Nokia’s 4G systems, will set up a private 5G network based on the Digital Automation Cloud product at a mine in Tampere, Finland. The idea, says Daeuble, is to validate the technology and see how it could be used “in terms of remote control and autonomous robots and machines that work in mines.”

That Sandvik project involves a local service provider, partly it seems because its spectrum was needed. But another job for Toyota, an existing 5G customer, appears to cut out the service provider entirely. “In that case, the deployment is direct,” says Daeuble. He cites airline company Lufthansa and Deutsche Bahn, a German railway business, as other major clients in the private wireless market.

It’s unlikely all 14 million industrial sites that Nokia has identified will gain a basestation, but even a decent chunk would represent a sizable market. Site equipment is also just one component of Nokia’s offer, which includes services and software, too.

What’s still unclear is how profitable this market will be. Unlike Nokia Software, another relatively new venture, Nokia Enterprise does not currently break out those details, and Daeuble acknowledges that Nokia faces both traditional rivals as well as new competitors in the business sector.

At least price-based competition from Huawei, which dealt such a big blow to Ericsson and Nokia in the mainstream 4G market, is unlikely to be a problem in Europe. As countries ponder excluding the controversial Chinese vendor from their 5G telco networks, the region’s industrial groups are likely to give it a wide berth.