Openreach turns to EXFO for a full-fiber boost | Light Reading

Building a full-fiber network to serve millions of homes is no easy task. Openreach, BT’s networks division and the UK’s biggest fixed-line operator, is eyeing a potential rollout to as many as 20 million properties by the mid-2020s. Any glitches could add to its already substantial bill, estimated at roughly 12 billion ($16.3 billion) in capital expenditure alone. They could also delay rollout at a time when authorities are worried about the fiber gap between the UK and other European countries.

Cue a new deal with EXFO, a network testing and analytics company based in Canada, which is to supply Openreach with a broadband-monitoring tool called Nova Fiber. After it has been installed in central office locations, this should allow the operator to carry out remote tests and avoid the expense of truck rolls to identify faults. 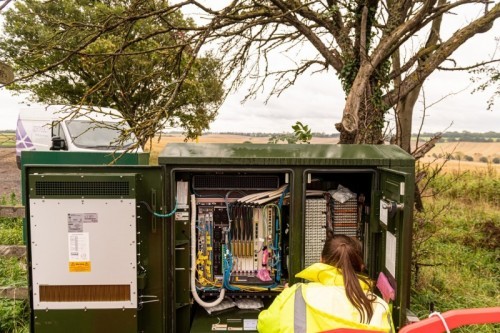 An Openreach engineer at work.

“We’re putting it in headends and using it to ensure build, but also so that we can monitor fiber and diagnose where faults might be,” says Peter Bell, Openreach’s chief technology officer. “Customers get assurance and orders done swiftly, and we can manage and monitor the service.”

The automation of some tasks that used to be carried out by its engineers should allow Openreach to reduce costs and accelerate deployment. Its full-fiber network currently reaches about 4 million homes, and Openreach remains on track to hit a March 2021 target of 4.5 million. But a rollout that covers 20 million premises is clearly a much bigger challenge.

“We are passing a home every 15 seconds 40,000 homes every week and this helps us to make sure it is streamlined,” says Bell. “The case for this type of technology is well made when you are doing large-scale deployments. It makes it smooth and rapid.”

The EXFO technology should also help Openreach to recruit the staff it needs for a fiber rollout. Reportedly, the operator is looking to hire about 5,000 engineers in 2021. “Finding thousands of skilled optical engineers is a tough job so if you can build intelligence into systems,that makes recruitment easier,” says Wim te Niet, EXFO’s vice president of sales.

His company has been making Openreach’s workflow system accessible from a phone application. Using that, Openreach staff can assign tasks and engineers can remotely call up and run tests. “It usually reduces the amount of optical knowhow that an engineer needs to have,” says te Niet. Information about the status of splicers and other fiber equipment is uploaded to and stored in a cloud system, he explains.

The contract with BT is a big deal for EXFO, which saw off competition in a tender to land the job. While the terms remain confidential, te Niet says the contact is key for EXFO both “financially and strategically.” His hope is that it will raise EXFO’s profile with other European operators investing in full-fiber networks.

“Openreach is taking a step to an automated process and for us to be a part of that deployment is critical and we expect lots of operators to follow that example,” he says.

EXFO had a difficult 2020 fiscal year, with sales down 7.4%, to about $266 million. It blamed the revenue decline largely on disruption caused by the coronavirus outbreak. Net losses widened to about $9.5 million, from $2.5 million a year earlier. In Toronto, its share has fallen 24% since the start of 2020, although it has gained 26% since late October. A major deal with one of Europe’s biggest fixed-line operators represents an auspicious start to the new year.

BT has also been bruised by COVID-19. Sales for the first six months of its current, March-ending fiscal year dropped 8%, to about 10.6 billion ($14.4 billion), while underlying earnings fell 5%, to roughly 3.7 billion ($5 billion), compared with the year-earlier period.

It was able to realize cost savings last year by cutting about 3,600 jobs some 3.4% of its total between April and September. But its plan to recruit 5,000 new engineers this year could weigh heavily on the bottom line. And fiber rivals threaten to erode its market share unless it moves quickly. Any cost savings or deployment boost it can realize from EXFO’s technology could make an important difference to investors, as well as the consumers and businesses demanding full-fiber products.