US cable operators remain far from uniform on their next-gen network plans, and some of that debate continues to focus on whether to upgrade hybrid fiber/coax (HFC) networks to the new DOCSIS 4.0 specs or take the financial hit involved with fiber-to-the-premises (FTTP) upgrades.

Schurz is already moving to DOCSIS 3.1 across its HFC networks, but is not ready to commit to making a future move to DOCSIS 4.0 in tandem with mid-split or high-split upgrades that greatly expand the amount of spectrum that can be dedicated to the upstream.

“What I’m concerned about is upstream bandwidth, especially in markets where we are competing against a competitor that might have fiber-to-the-home,” Tom Williams, CTO at Schurz Broadband Group, said today on a Light Reading-hosted webinar that explored “Cable’s Fiber Outlook” and DAA and CIN (Converged Interconnect Network) strategies.

That is causing Schurz to think about whether it should eventually move up to DOCSIS 4.0, go with upstream spectrum upgrades, or start to overbuild with FTTP.

“That’s kind of the big question that we have today,” Williams said. Schurz, he noted, has already overbuilt HFC with FTTP in partial areas for competitive reasons, and was pleased with the result.

Concerns about competition and staying ahead of bandwidth demand were among the top reasons driving FTTH builds among operators that took part in the most recent SCTE|ISBE Cable Fiber Outlook survey conducted in partnership with Light Reading and Heavy Reading. 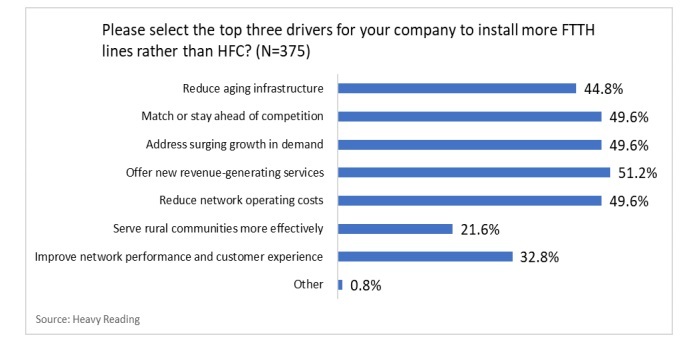 Others have been more targeted with FTTP. Cox Communications passes less than 10% of its homes with FTTP, wielding it primarily in greenfields and for “high value commercial nodes,” said Robert Kuse, senior director, access engineering, at Cox. However, “advancing a competitive HFC network,” with a goal of providing 1-Gig symmetrical speeds, remains the priority, he added.

Ahead of DOCSIS 4.0, some recent HFC network tests using a distributed access architecture (DAA) with a high-split have demonstrated symmetrical speeds of 1.25 Gbit/s.

The survey also focused on operator plans for CIN, with more than 33% indicating they plan to use a CIN architecture for four or more services. 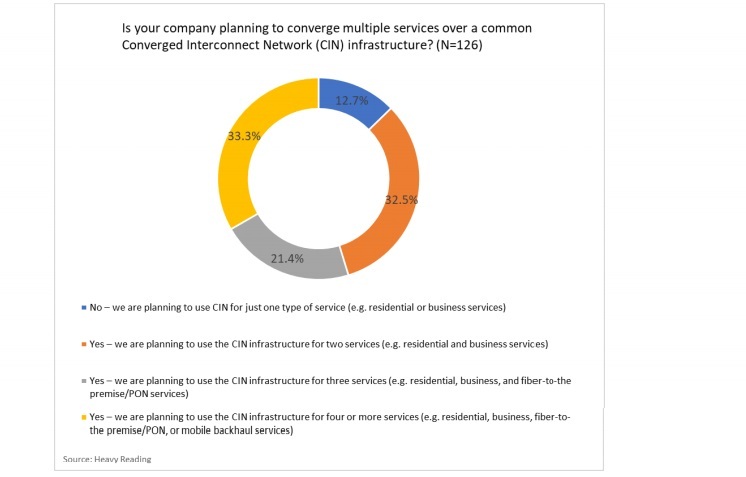 Fernando Villarruel, chief architect, MSO practice, at Ciena, said CIN strategies can prevent costly buildouts of fiber from the trunk back to the hub and represents a natural convergence of services over a common infrastructure. But he was likewise surprised to see the number of respondents that said they intended to deliver more than two services on CIN, given that “it’s a heavy lift.”

Villarruel said he’s also seeing more traction with CIN at the moment outside the US where operators have had more experience running both cable and mobile services and likewise expect to have the tools in hand to make that convergence happen.

“In the US, some operators will come into this directly more strongly than others,” he said.

Kuse said Cox is also driving toward converged access and transport for PON, residential services and business services (including wireless backhaul) that have historically been delivered on separate fiber networks.

Schurz is also heading in the CIN direction to help manage and take advantage of what fiber is already deployed, Williams said.

John Dickinson, president of Just Digital Transformations, also stressed that there’s been a big push toward CIN to help address a dearth of fiber available from the hub to the node and get multiple services on a single pair of fibers.

Emerging 5G services appears to be a bit player in CIN strategies at this point.

As a driver for CIN, 5G pales versus the upstream bandwidth demands being unleashed by the pandemic, Ciena’s Villarruel said.

5G is not a direct driver, Cox’s Kuse agreed. But he does see CIN playing a tangential role due to fiber densification efforts and the growth of small cell deployments linked to new 5G networks.

Burton also views CIN as an “important building block” for advanced DOCSIS or FTTP networks that can take on new competition emerging from operators expanding to adjacent regions, a recent wave of M&A activity and projects coming out of the Rural Digital Opportunities Fund (RDOF). Regarding that latter example, he said it’s possible that RDOF winners serving new rural areas will on occasion also pass through areas served by an incumbent telco or cable operator along the way.

“There will be a lot of competition in areas where no competition existed before,” he said, holding that CIN can provide a foundation to build upon as newcomers enter the fray and need to build from scratch.