It’s no secret that overall broadband data consumption has surged during the COVID-19 pandemic, but a new study from OpenVault shows that “power users” those who consume at least 1 terabyte of data per month have almost doubled.

Meanwhile, “extreme power users” defined as broadband customers who chew up at least 2 TB per month now represent 2.2% of all subs, a 184% increase from from OpenVault’s Q4 2019 study. 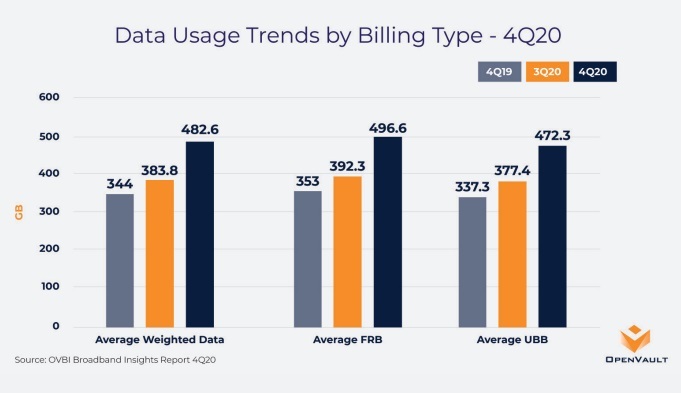 Over half (53.6%) of all subscribers in the study now routinely consume more than 250 gigabytes of data each month. OpenVault called that an “important benchmark,” considering it placed 250 GB monthly users in the power user category just a few years ago.

Meanwhile, average upstream bandwidth usage in December 2020 reached 31 GB, a 63% increase over the year-ago period. This upward trend has caused cable operators to prioritize capacity needs for the upstream on their widely deployed hybrid fiber/coax (HFC) netoworks, spurring them to pursue “mid-split” or “high-split” upgrades that boost the amount of spectrum dedicated to the upstream.

According to OpenVault, here’s how overall usage trends compared in 2020 versus 2019:

OpenVault’s study is based on anonymized, aggregated traffic generated by its ISP customer base, with results largely focused on the company’s US customers.

The latest batch of results emerge as broadband service providers are under increased pressure to pull back or curtail their deployment of usage-based data policies and data caps during a pandemic that has amplified the critical need for connectivity.