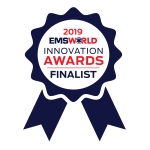 Posted at 17:26h in by fiberguide 0 Comments

The feature is the first of its kind to give first responders a dedicated platform to communicate with other out-of-hospital care providers and hospitals in real time.
BOZEMAN, Mont.–(BUSINESS WIRE)–#EMSWorldEXPO2019–Pulsara is excited to announce that the company has been selected as a Finalist by a 4-person judging panel for the 2019 EMS World Expo Innovation Award.

Pulsara connects care teams across organizations and their latest innovative feature to be nominated for the award is their new EMS handoff feature. Whereas EMS providers have historically had workflows to hand off patients to hospital teams in Pulsara, First Responders now have the ability to start a case and hand off the patient to an EMS crew.

“This functionality really positions Pulsara to be able to form the backbone for future communications as initiatives like ET3, Community Paramedicine, and Mobile Integrated Health continue to see success and expansion,” said Pulsara’s Chief Marketing Officer and Flight Paramedic, Kris Kaull. “It’s about connecting the right people to the right resources at the right time — no matter how our out-of-hospital care system evolves.”

The new EMS handoff feature is one of many ground-breaking functionalities included in the platform’s Pulsara ONE package which is completely free to EMS providers and Emergency Departments. “When it comes to time sensitive emergencies, successful treatment is about connected teams,” said Pulsara’s Founder and CEO, Dr. James Woodson. “Pulsara ONE connects out-of-hospital providers to each other and to hospital teams, offering ONE source of truth for communication around your patient.”

The judging panel at EMS World selected 30 finalists out of 64 total submissions to the Innovation Award contest this year. At the EXPO next week, judges will visit finalists’ booths for a live demonstration of the innovations prior to final selection of the 20 Winners.

Pulsara encourages anyone attending EMS World to stop by booth #1434 for a demonstration of this and other new features included in the Pulsara ONE platform.