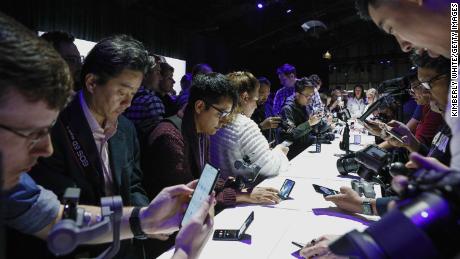 The South Korean company said on Tuesday that it expects to make an operating profit of roughly 6.4 trillion won ($5.2 billion) for the January-to-March period. That’s up nearly 3% from the same period a year ago and right in line with what analysts polled by data provider Refinitiv predicted. Samsung said it expects sales will also rise about 5% to 55 trillion won ($45 billion).Shares in Samsung rose about 2% in Seoul on the news, though later pared gains to 1.4%.The company will report full first-quarter results at the end of this month. Samsung — which also supplies key parts for companies such as Apple (AAPL) and Huawei — is among the first of the big tech companies to report earnings for the quarter, and its full report will offer a glimpse into how tech giants are coping with the pandemic.If Samsung reports sluggish sales of memory chips and display panels, it could be an indication that smartphone makers and consumer electronic manufacturers are suffering. Tuesday’s forecast did not break down sales by division. In January, Samsung had predicted a general pickup across its business in 2020, citing a turnaround in the memory chip market driven by rising prices, higher demand from data center companies and greater adoption of 5G smartphones. The pandemic could help stabilize Samsung’s memory chip business, according to Jae-yun Lee, an analyst with Yuanta Securities. Millions of people working from home means “Amazon (AMZN), Google (GOOGL), and Microsoft (MSFT) are accelerating investment in data centers,” Lee wrote in a note on Monday, ahead of Samsung’s earnings guidance. But Lee and other analysts say the company’s smartphone business will be hammered. Samsung and Apple, as well as many of their partner carrier companies, have been forced to shutter shops around the world, as the Covid-19 pandemic prompts major cities to go into lockdown. The closures will continue to hurt Samsung in the months ahead, according to Greg Roh, an analyst with brokerage firm Hyundai Motor Investment Securities. “Given consumer preference to purchase premium smartphones in physical stores rather than online, we expect (Samsung’s smartphone) division to suffer a severe earnings decline” in the second quarter, Roh wrote in a recent investor note. With the pandemic showing signs of “being prolonged, the smartphone market is contracting,” DJ Koh, head of Samsung’s mobile division, said at a shareholder meeting last month.Samsung also had to briefly shut down one of its smartphone plants in South Korea after a worker tested positive for the virus.Even as their factories return to normal, Samsung and other smartphone makers are bracing for a steep hit.In early March, before the scale of the crisis in Europe and the United States became apparent, research firm Strategy Analytics said in a report that it expected global shipments of smartphones in 2020 to be 10% lower than expected “due to the fear and paralysis caused by coronavirus.” “No one wins. All major [smartphone makers] will take a hit and ship [fewer] smartphones than pre-coronavirus outbreak,” the firm said.