Semtech is ready to sail the ocean blue with Wilhelmsen, a global maritime industry group, which announced plans to offer Semtech’s 2.4GHz-based LoRa sensors to shipping customers and use the technology in its own network.

Wilhelmsen says it will be deploying the new 2.4GHz LoRa-based connectivity in its own operations to improve efficiencies and will also offer its customers IoT solutions. Wilhelmsen serves 20,000 vessels out of 2,200 ports in some 70 countries and handles more than 220,000 product deliveries per year. 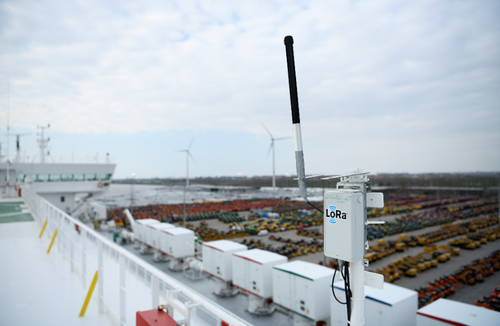 Large ocean-going container ships will need hundreds of sensors connected through several LoRa sensors to monitor temperature and more conditions for the goods onboard. Data will be transferred via satellite to a data center.

“Most ships will start from around 200 [sensors], but excluding cargo,” a Semtech spokesperson says of ship-board systems. “These are usually [for] condition monitoring, fire, crew localization and safety, as well compliancy.”

Why this matters
This is a big deal for Semtech as it continues to take on cellular IoT in general, and Sigfox in low-power wide-area networking (LPWAN). Semtech predicted LoRa-related revenues between $80 million and $100 million during Semtech’s fiscal 2020 year, during its second-quarter earnings call on August 28.

LoRa is currently in service in around 100 countries around the world, and the GSMA claimed 119 narrowband IoT and Cat M commercial launches as of August.

This is the first time, however, that LoRa has taken to the sea with a major shipping deal for the LPWAN technology.