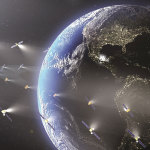 Posted at 06:55h in by fiberguide 0 Comments

SES’s interoperable GEO/MEO platform has already been validated in the cruise industry, revolutionising the guest experience at sea by delivering up to 1 Gpbs per ship to major cruise lines around the world with its managed MEO- and GEO-based connectivity service. The test flight paves the way for SES to similarly redefine the connected air passenger experience by enabling different operational models, including blanketing of large dense traffic routes, bolstering of capacity around major airports, or even following individual aircraft from take-off to landing – all at record speeds and with low latency.

“The world’s first low-latency, high performance broadband aero experience is closer than ever before with this tremendously successful demonstration of MEO and GEO interoperability. Driving scale and performance into our customers’ networks is fundamental in delivering the best passenger experience in the skies. Our cruise customers have long experienced the benefits of the combined power that low latency MEO- and GEO-based connectivity brings to network performance and resilience. This innovation is now on its way for connected commercial and business air travel,” said Steve Collar, CEO of SES. “We are gearing ourselves up for the launch of O3b mPOWER and now, with a demonstrated ability to roam seamlessly across our GEO and MEO networks, our customers will enjoy unprecedented speed and performance from our O3b constellation, while also benefiting from the scale and reach of our GEO fleet.”

“The cutting edge products Thales is bringing to the market with both internal developments, as well as leaders in the industry, is exciting for the future of our FlytLIVE connectivity solution,” said Philippe Carette, Chief Executive Officer, Thales InFlyt Experience. “This proof-of-concept demonstration introduces an operational Hybrid network that will provide satellite network redundancy with continuous and seamless high-speed internet in areas otherwise hindered by congestion. The system offers a consistent passenger experience gate-to-gate; Ka-band coverage on routes where GEO satellites do not currently exist; and is fully compatible with the new SES-17 satellite built by Thales Alenia Space that is scheduled to enter commercial service in early 2021.”

SES is the world’s leading satellite operator with over 70 satellites in two different orbits, Geostationary Orbit (GEO) and Medium Earth Orbit (MEO). It provides a diverse range of customers with global video distribution and data connectivity services through two business units: SES Video and SES Networks. SES Video reaches over 355 million TV homes, through Direct-to-Home (DTH) platforms and cable, terrestrial, and IPTV networks globally. SES Video delivers a full suite of innovative end-to-end value-added services for both linear and digital distribution, and includes the ASTRA satellite system, which has the largest DTH television reach in Europe. SES Networks provides global managed data services, connecting people in a variety of sectors including telecommunications, maritime, aeronautical, and energy, as well as governments and institutions across the world. The SES Networks portfolio includes GovSat, a 50/50 public-private partnership between SES and the Luxembourg government, and O3b, the only non-geostationary system delivering fibre-like broadband services today. Further information is available at: www.ses.com

Thales (Euronext Paris: HO) is a global technology leader shaping the world of tomorrow today. The Group provides solutions, services and products to customers in the aeronautics, space, transport, digital identity and security, and defence markets. With 80,000 employees in 68 countries, Thales generated sales of €19 billion in 2018 (on a pro forma basis including Gemalto).