South Korea has made a bid for the AI top table, with its national carrier unveiling a powerful artificial intelligence (AI) chip.

SK Telecom unveiled the chip, the Sapeon X220, on Wednesday, accompanying a new strategy of building on the semiconductor to provide AI data centers and AI-as-a-service business.

The chip, one of a growing breed of application-specific integrated circuits, is 1.5 times faster at deep learning tasks than a Graphics Processing Unit (GPU), while using 20% less power and half the price, says the operator. 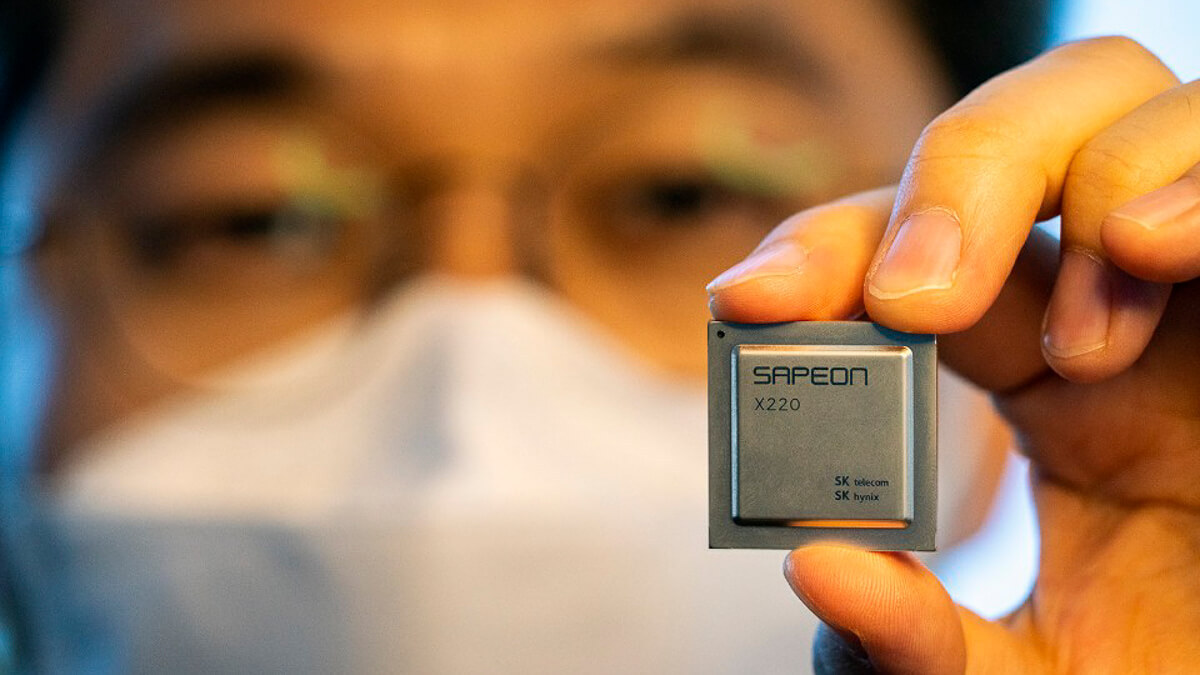 It uses parallel processing to speed up deep learning computation tasks to 6.7 kiloframes per second, while using only 60 watts of energy. Data centers set up for devices like driverless cars and drones. The nation of 52 million was first in the world to roll out commercial 5G in April 2019.

Beating US and China was a quiver in the bow of the country’s telecoms industry, and buoyed hopes by Samsung in taking on Apple as a top-tier smartphone maker and Huawei as a provider of 5G infrastructure.

Chips currently make up a fifth of South Korea’s exports.

SK Telecom is the East Asian country’s largest carrier, with over 30 million subscribers and nearly 50% market share, and is part of SK Group, the third-largest conglomerate, or chaebol.

The chaebol has 95 member companies and expanded into the semiconductor business in 2010, when it acquired a majority share in the former Hyundai Electronics, which then joined the group as SK Hynix.

It is a market that is likely only to grow more globally competitive.
Amazon and Google are investing in their own semiconductor chips aiming at server applications.

South Korea’s government has sunk $542 million into semiconductor development in recent years, with plans to invest $900 million more in the next decade. Meanwhile, the US Department of Energy announced $1 billion in funding for private-public AI partnership projects this summer.

Targeting applications that bring AI close to cloud end-users would play well off South Korea’s strengths in chipmaking and 5G, goes SK Telecom’s reasoning. Putting AI chips like the Sapeon X220 close to the edge would let devices benefit from quite good AI, with very low latency. Nice if you’re running a car or drone with it.

As next steps, security company ADT Caps (which SK Telecom bought from the Carlyle Group in 2018) is going to develop an AI-based video monitoring service, which it will call T View.

The operator will try to use the new chip next year to improve the voice recognition capability of its AI assistant NUGU.

And the new AI will also go to work offering better content curation in SK Telecom’s over-the-top broadcast joint venture with the US’s Sinclair Broadcasting, called Cast.era.
But this being 2020, it might be most interesting to see where SK Telecom’s forays into AI telehealth go.

Last month, the operator started testing an AI which offers a voice analysis tool to diagnose dementia and other memory disorders in elderly people. It has worked on this with Aria Care Korea, which works with memory disorder sufferers and a social enterprise called Happy Connect.

Pretty fly for a new AI.