Spaceflight Announces Next Three Rideshare Missions on ISRO’s PSLV, Slated Through the End of 2019 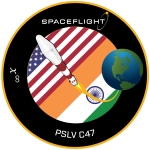 21 Oct Spaceflight Announces Next Three Rideshare Missions on ISRO’s PSLV, Slated Through the End of 2019

Posted at 12:00h in by fiberguide 0 Comments

Analytical Space Inc.’s (ASI) second technical demonstration spacecraft, dubbed Meshbed, will be launching on PSLV C47 in November. ASI’s mission is an on-orbit demonstration intended to test technology that will enable users on Earth to gain faster access to satellite data. The spacecraft features a patented antenna from MITRE that could help enable faster access to space-based data, as well as government missions including tactical communications and intelligence, surveillance and reconnaissance.

“PSLV continues to be a reliable launch partner for us, enabling Spaceflight to launch a variety of customers,” said Curt Blake, CEO and president of Spaceflight. “By the end of 2019, we will have executed 11 launches on PSLVs and sent more than 100 satellites to orbit on this vehicle. The consistency of the PSLV has played a critical role is assisting our customers, especially those launching constellations, achieve their mission and business goals.”

The company’s last mission aboard this launch vehicle was PSLV C45, which deployed 21 rideshare spacecraft earlier this year. Spaceflight has completed five missions already this year, with another five planned in 2019. Other noteworthy 2019 missions include Spaceflight’s GTO-1, which deployed the first commercial lunar lander aboard a SpaceX Falcon 9, and two rideshare missions with Rocket Lab, which sent nine spacecraft to orbit. In December 2018, SSO-A, the company’s historic dedicated rideshare mission, successfully launched 64 unique smallsats, making it the single largest deployment of satellites from a U.S.-based launch vehicle.

Spaceflight is revolutionizing the business of spaceflight by delivering a new model for accessing space. A comprehensive launch services and mission management provider, the company provides a straightforward and cost-effective suite of products and services including state-of-the-art satellite infrastructure and rideshare launch offerings that enable commercial and government entities to achieve their mission goals on time and on budget. A service offering of Spaceflight Industries in Seattle, Wash., Spaceflight provides its services through a global network of partners and launch vehicles, including the Falcon 9, Antares, Electron, Vega, Soyuz, PSLV, SSLV, and LauncherOne. For more information, visit http://www.spaceflight.com.
Contacts
Spaceflight PR contact:
Christie Melby, Communiqué PR
[email protected]