Posted at 04:34h in by fiberguide 0 Comments

Although 5G service is already available in many countries and markets, it is poised to enter a new phase with the deployment of the 5G core (5GC) paired with a 5G RAN in a standalone (SA) configuration. 5GC deployments will enable the delivery of low latency services at the edge, but they also have major security implications.

In addition to commencing 5G SA rollouts, some communications service providers (CSPs) are starting to implement MEC-based services. Given that 5GC SA and MEC are edge-based cloud-native technologies, there are clear synergies associated with deploying both.

However, as shown in the table below, MEC and 5GC both inject a great deal of complexity into optimizing investment in foundational capabilities such as firewalls and distributed denial-of-service (DDoS) mitigation infrastructure. As a result, by 2023, CSPs will make substantial investment to support DDoS detection and mitigation in MEC nodes utilizing a mix of physical (13-15%), non-container (8-16%) and container-based functions (11-19%) even within the same network technology.

These data points also confirm that MEC nodes and 5GC SA are both becoming important components of an effective edge security strategy. Also of note is that existing gateways, firewalls, network address translation (NAT) and DDoS infrastructure will remain important security functions. Only a small range of survey participants (11-24%) expect that these will not be required in three years, which validates that they remain important security functions.

Question: How will the following security and GiLAN capabilities be supported in 2023? (Select all that apply) (n=76-98)
(Source: Heavy Reading)

As the table above confirms, DDoS detection and mitigation investment will need to be spread among 4G, 5G and MEC. One of the reasons a multi-network investment strategy is necessary is that DDoS attacks are opportunistic and target any interface in any cloud location, on any device.

The figure below documents this reality. The key takeaway is that based on the highest level of investment input (Rank 1), DDoS investment in MEC will necessitate substantial security investment to deal with a range of DDoS attacks especially for those affecting MEC nodes (39%). 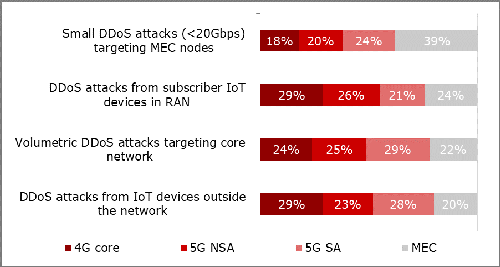 Question: On a scale of 1 to 4 where 1 is the greatest priority and 4 is the lowest priority, please rank your investment priorities in 4G, 5G, or MEC networks to address the following security threats? (n=111)

The requirement to support a multi-interface or application-level MEC and 5GC SA DDoS security strategy is emphasized in the bulleted mitigation implementation options below. Although a few survey respondents (13%) did not yet have a strategy at all, 27% plan to mitigate DDoS attacks via core network interfaces (including 5GC), while 23% will deploy DDoS mitigation functions in each MEC node monitoring internet interfaces:

Question: How will MEC nodes be protected from DDoS and other attacks? (n=107)

A third approach is to develop DDoS monitor and mitigation protection in the application layer (21%) itself. This is logical given DDoS attacks manifest themselves in various forms (e.g., application-layer attacks and volume-based attacks).

Overall, these data points and others we will present in future related blogs confirm that edge security in either a 5G or MEC context is fundamentally different from previous mobile generations. Successful investment and execution strategies in this distributed world will hinge on the ability to integrate a flexible mix of fixed, virtualized and containerized multi-interface solutions at the edge.

Plan to watch this archived version of a recent webinar where we presented more of the research data from this study. You can register here.

This blog is sponsored by A10 Networks.