Posted at 18:34h in by fiberguide 0 Comments

AT&T’s changing of the guard is officially underway.

Fulfilling a scenario that’s been speculated on for months, AT&T announced Friday that CEO Randall Stephenson is retiring and that the AT&T board has elected current president and COO John Stankey to succeed him.

Stankey’s ascension to the top slot and as a member of member of the AT&T board will take effect July 1. Stephenson, 60, will stay on as executive chairman of the board until January 2021. AT&T said it will elect an independent director as the new chairman when Stephenson retires from the board in January. 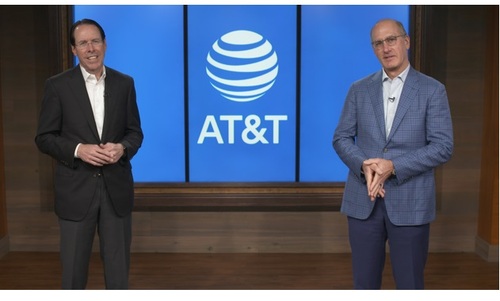 John Stankey (right) is will succeed Randall Stephenson as CEO of AT&T on July 1.

Stankey has been viewed as Stephenson’s successor for several months. AT&T said his selection completes the final phase of a succession planning process the board first undertook in 2017 that looked at both internal and external candidates.

Elliott Management, which had pushed for big changes at AT&T, “supports” the decision to have Stankey take on the CEO role and that it’s been engaged with AT&T on the search for a successor, according to CNBC.

Stankey’s elevation at AT&T follows the recent completion or near-completion of some key projects at the company he was heading up. That includes the national launch of AT&T TV, the company’s new OTT-delivered, contract-based pay-TV service, and the development of HBO Max, a new supersized SVoD service that will launch on May 27 and feature content from HBO and other WarnerMedia properties.

AT&T also announced the move soon after former Hulu exec Jason Kilar was tapped as CEO of WarnerMedia effective May 1. Kilar will report to Stankey, who had been leading the WarnerMedia division.

Turbulent times
Stankey, 57, joined AT&T in 1985. He will be taking the helm of the AT&T mothership amid turbulent times for the company and the broader telecommunications and entertainment industries.

While the current COVID-19 crisis is impacting AT&T across the board with weeks and possibly months of more uncertainty ahead, the company was already undertaking a major cost-cutting initiative, was in the throes trying to fix a declining pay-TV business in an age of streaming and cord-cutting, was entering a crowded field of direct-to-consumer streaming services, and was pushing ahead on fiber network upgrades. AT&T has also been ensconced in the early stages of its 5G network rollout and service deployments.

Stankey will also be leading AT&T amid ongoing questions about the future of DirecTV, a business acquired by AT&T in 2015 that is struggling mightily, or try to find a new home for it. Despite questions about whether regulators would allow such a deal, a possible Dish Network-DirecTV combo has been long speculated.